How do we make solid, faster progress in solving the world's most intractable problems?

According to the Clinton Global Initiative the past few days, we have to (a) collaborate; (b) think holistically; (c) circumvent obstacles to progress (including the U.S. Congress); (d) design the most user-friendly way, (e) measure it, and (f) "address the strategic role of women in everything we do," as former President Clinton emphasized in his opening remarks on the first day of CGI's 2012 annual meeting.

President Clinton also restated CGI's commitment to collaboration: "We live to prove that cooperation works better than conflict... (that is) not to abolish disagreements, we'll have lots of them here, but to focus on solutions." 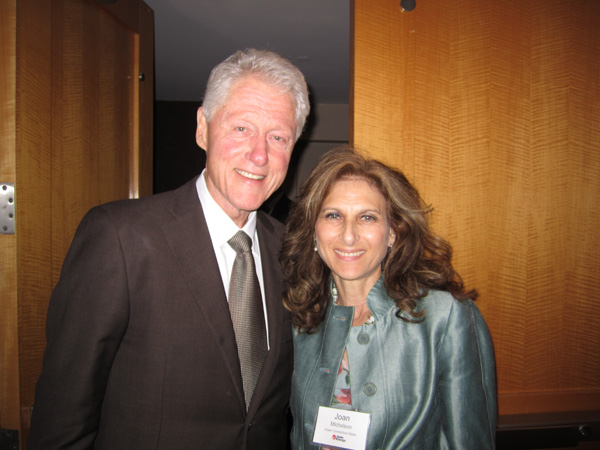 For those unfamiliar with CGI, it's President Clinton's organization focused on these huge challenges, and includes hundreds of heads of state, Nobel Laureates, CEOs of major businesses, high revenue and not-so-high revenue entrepreneurs, non-profits, foundations, major philanthropists, and members of the media. Its annual gathering is always scheduled in New York City in coordination with the United Nations General Assembly to make it easy for heads of state and top government officials from around the globe to drop by for a chat.

Whether seeking to lift millions out of poverty, eradicate curable diseases, fuel progress while protecting the environment and natural resources, empower all beings (regardless of gender, religion/ethnicity or economic status), educate a 21st century workforce, or create permanent jobs that grow the middle class worldwide, this strategy is the catalyst for fascinating and innovative solutions that are bearing fruit.

Commitment as the Cornerstone

The cornerstone of CGI is the "commitment" structure of CGI, where members "commit" to develop a particular program or initiative and then report on its progress periodically, meeting specific milestones. This structure holds members accountable for fulfilling those commitments. One might say this is the Clintonian version of President Reagan's "trust but verify" philosophy. In exchange, CGI members get access to the best minds, resources and publicity machine on the planet. Since CGI's founding in 2005, according to a CGI press release, "To date CGI members have made nearly 2,300 commitments, which have already improved the lives of more than 400 million people in more than 180 countries. When fully funded and implemented, these commitments will be valued at $73.1 billion." Whether or not you agree with President Clinton, CGI is generating impressive results.

Here are the top six lessons from CGI's 2012 annual meeting:

(1)Collaborate: Collaboration is at the heart of the CGI methodology. All parties sitting down together with a focus on shared values and a shared goal - setting aside their own agendas, and suspending judgments and preconceived notions in order to drive results. This also means collaborating with the end-user. For example, Coca Cola and Dean Kamen of Segway fame are collaborating to facilitate clean drinking water and access to electrical power in rural South Africa, Paraguay and Mexico, having done a pilot test in Ghana. The initiative will build solar- or bio-fuel-powered facilities where locals can bring water to be purified and charge their cell phones, while also being able to watch international news on satellite TV. In addition, the facilities will be managed by female entrepreneurs.

(2)Think holistically: "We need to look at the needs of all the stakeholders, not just the shareholders," declared Arif Naqvi of Abraaj Holdings on a panel moderated by Time magazine Managing Editor Rick Stengel. This is also the most efficient way to increase effectiveness while also reducing costs, usually by leveraging technology. Lynn Stout of Cornell Law School added, "The biggest myth is that business is run well when it maximizes shareholder value."

(3)Circumvent obstacles: The trick is to go around the obstacles, to get innovative, ask other people/companies to partner with you - and keep asking until you get a "yes" and action. For example, everyone is frustrated with Washington, especially with the U.S. Congress. Ironically, that shared frustration may just be the magic elixir that catalyzes creative collaborations - and solutions that probably have a more lasting impact. One might argue, for example, that the private sector, local governments, the U.S. Administration and consumers are coming together around initiatives that are giving rise to a de facto national energy policy, one project, one local legislation at a time. (President Clinton told a group of about 30 of us at a private dinner that he thinks Congressional gridlock will subside after the U.S. presidential election no matter who wins.)

(4)Design the most user-friendly way: Put yourself in the other guys' shoes. Who is touched by this problem? What do they need? Start where they are. Don't build them a school if they don't have food and shelter; give them food and shelter first, then build the school. Tim Brown, CEO & Founder of IDEO who is more familiar with designing shopping carts than policy explained to Linda Tischler of Fast Company magazine that, "Design is about being intentional about what we want the outcome to be." The outcome has to match the community's needs - not ours - and the community needs to be engaged in the process of designing the solution. If you build it, they won't necessarily come unless they are included.

(5)Measure it: Measure each partner's participation, as well as the whole project's outcome. Measure the impact on each population it touches; not just shareholder value, but the value for all stakeholders. Measure the impact on the environment, and integrate sustainability into the process. The CEO of Puma talked about his Environmental Profit & Loss Statement as a way of "monetizing the environmental damage created by the business. You have to know your impact first, so you can design to reduce it."

(6)Involve women: Women are the key to success, and historically the most ignored and neglected or downright abused. It bears repeating that a key component of the Coca Cola-Dean Kamen initiative (for clean water in Africa) is that women entrepreneurs will manage the operations (it's part of Coke's "5x20" program to boost female entrepreneurship in the developing world). Women drive results -including profitability, financial responsibility, customer service, and sustainability - as many top-notch studies have indicated. 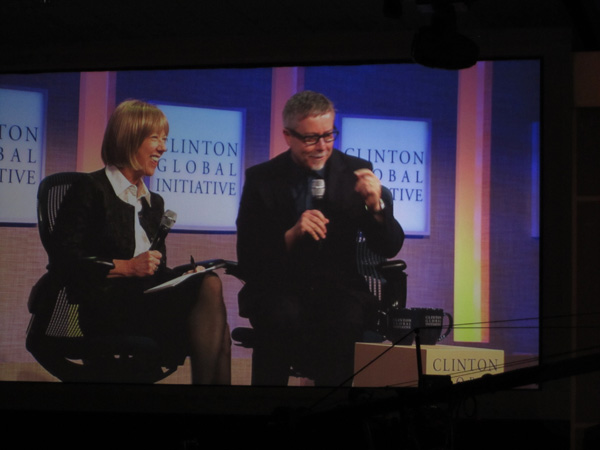 There is this fascinating juxtaposition at CGI: On the one hand are overwhelmingly huge and life-threatening challenges across the globe, any of which could cause a grown man's knees to buckle. On the other hand is the overwhelming optimism, the "can do" spirit that permeates the place. Just in case any curmudgeons in attendance missed it, Chelsea Clinton led a panel called, "The Case for Optimism in the 21st Century," including a whiz kid who is developing a ground-breaking treatment for cancer.

"(T)he genius of democratic capitalism and democracy is that the new norms of economic behavior are likely to emerge from executives and entrepreneurs, workers and consumers, money managers and bankers who find the courage to demand something better of themselves and others." That was written by Steven Pearlstein at the end of an article in The Washington Post on American capitalism last month, but it well could have been stated at CGI.

Underscoring the need for courage - and to inspire the audience to keep pressing ahead - President Clinton closed his Clinton Global Initiative 2012 annual meeting with the sweet face of a small, growth-stunted woman from China who he nearly met 1998 on a trip to her family's home in rural China as President. At that time, her family kept her upstairs in a bedroom away from his view, feeling she was a disgrace. Today, that radiant woman who graced the stage and brought the place nearly to tears (with her new husband) is an advocate for the disabled in China, working to bring the disabled out of their bedrooms and into mainstream Chinese society.

Let her inspire you.

The ultimate lesson of CGI? Lead, follow or get out of the way.