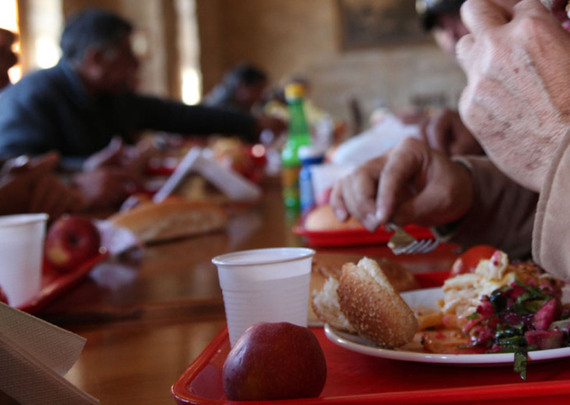 Jerry Higgs suffered a career-ending back injury on a construction job. Two surgeries later, he's facing a lifetime of pain killers and making ends meet on California's below-poverty level SSI payments for the aged, blind and disabled. He joined Hunger Action Los Angeles because, as he says, "I was tired of not having a voice."

"How are we supposed to live? Rent is high in LA, we have to choose whether to buy groceries or medicine. I've been going to Sacramento since 2007. This year, we talked to my Assemblyman, and he was all for us," says Higgs. "He said he knows people on SSI really need it, with what's going on in the streets, people going hungry today in Los Angeles. Says he's trying to help."

This month, California legislators will finalize the state's first sunny-day budget since the Great Recession officially ended and voters approved Proposition 30 to stabilize the state budget. At the Insight Center, we'll be hoping that they focus on the 1.3 million Californians like Jerry Higgs, and the local economies these SSI recipients live in (source). Our Elder Index measures poverty more accurately than federal poverty levels, but also points toward a more sustainable future economy if we lift people out of poverty.

Like all California SSI recipients, Jerry is ineligible for CalFresh food stamps, and must pay for housing, food, medicine, transportation and the needs of daily life with this small grant. The Elder Index for Los Angeles County shows that Jerry needs more than $2,030 per month to make ends meet, including $1,137 for rent, $258 for food, $182 for healthcare, $239 for transportation and $214 for miscellaneous expenses (source).

But the maximum monthly SSI benefit is just $877, leaving an annual gap of over $13,000 for Jerry and other recipients, while shortchanging Los Angeles' economy hundreds of millions of much-needed dollars (source).

During the recession, California legislators cut monthly payments, suspended and then eliminated cost-of-living adjustments. In doing so, they took $4.6 billion out of circulation in the localities where benefits recipients live (source). At its current level, SSI leaves 1.3 million other Californians not only below this important self-sufficiency standard but below the federal poverty level. Restoring SSI to pre-recession levels would put an additional $161 per month in recipients' pockets, allowing them to support local merchants, pay rent, take needed medicine, and improve economic well-being.

Leading advocates for seniors and people with disabilities have made restoration of SSI benefits and reinvestment in California communities a centerpiece of advocacy this year. The California Hunger Action Coalition brought to light the shocking fact that SSI grants for couples are actually lower in 2014 than they were in 2007, and that 1 million Californians are trapped in poverty by low SSI levels. The California Alliance for Retired Americans recently completed 120 legislative delegations urging restoration, saying "the programs that were cut save lives and allow seniors and people to age with dignity and independence." California Partnership has collaborated to produce the Human Impact Budget in Alameda County, demonstrating how harmful cuts have been.

It's time to look at how prudent reinvestments to lift Californians above the poverty line and toward self-sufficiency will benefit local economies. To this end, the Insight Center has developed a series of county-level fact sheets highlighting the gap between SSI payments and actual cost of living - and beginning a conversation about how we calculate the economic impact of these critical income supports. While we know that investments in poor and working-class communities stay close to home and circulate in the local economy, rather than overseas to private bank accounts in Switzerland or the Cayman Islands, we haven't really measured how these investments benefit communities and economies as well as families and individuals.

It's an idea whose time has come. Recent polling by the Public Policy Institute of California suggests that Californians are broadly supportive of restored investment in our neighbors. More than two thirds, 68 percent, say that poverty is a critical issue for the state to address, and majority support restoring the social safety net.

At the Insight Center, we are focused on increasing economic security for communities in need across our great state. We urge legislators to do what is right and best for California seniors and our local economies.

Henry A. J. Ramos is CEO of the Insight Center for Community Economic Development.