"Well, this is a fine mess you've gotten us into, Hillary!" That would seem to sum up the general viewpoint among pundits in the wake of FBI Director James B. Comey's statement on Tuesday.

Polls indicate a "plague on both your houses" attitude toward Trump and Clinton. Both are viewed as untrustworthy, and the FBI report on her e-mail practices only adds to that perception of Secretary Clinton. Just over a week ago, I wrote here that it is flabbergasting that a plurality of Americans say they believe that Donald Trump is more honest and straightforward than Hillary Clinton. New polls in the wake of the FBI report will, presumably, show that Hillary's "dishonest" and "untrustworthy" numbers are increasing.

Back in the waning years of the Cold War in the 1980s, we used to hear a lot from conservatives about the false "moral equivalence" liberals were said to be proclaiming between the actions of the United States and those of Communist regimes.

The great danger in this election year is that the American people might fall for a false immoral equivalence argument from Republicans.

Let us stipulate that Hillary Clinton has done some stupid things. She has told lies. Name me a politician this side of Saint Jimmy Carter who hasn't. But the public perception of her is based only in small part on her actual instances of prevarication. Most of it is from a narrative skillfully woven by right-wingers from the early 1990s onward.

American voters must not, however, fall into the trap of thinking that Hillary's occasional lies are even remotely on the level of Trump's, which are constant, day after day, hour after hour, on virtually everything. 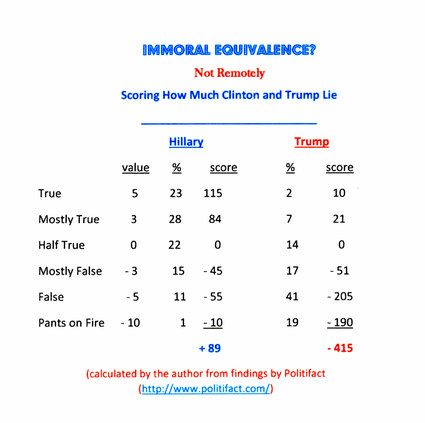 Hillary Clinton has a very positive overall rating for telling the truth; Donald Trump has an extraordinarily low rating, showing that he tells bald-faced lies on a daily basis.

One of the major party presidential candidates in 2016, Hillary Clinton, is a politician who has, like almost all politicians, occasionally not told the truth. The other, Donald Trump, is a man who wouldn't know the truth if it smacked him across his face, one who, in the words of Eugene Robinson, "lies the way other people breathe. . . . He doesn't distort facts, he makes them up."

The former is , her misstatements notwithstanding, someone totally capable of being a very good president. The latter would be the worst disaster the United States of America has faced at least since the Civil War. Don't let that megalomaniac fool you. For him to assert that it is Hillary who is a big liar is, well, just another of his enormous lies. 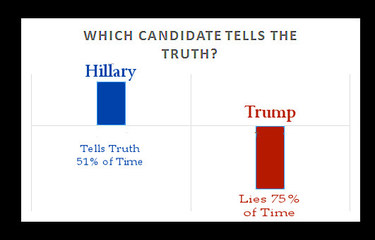 In the words of The Who:

Then I'll get on my knees and pray
We don't get fooled again
No, no!