The refugee children of Central American wars during the 1980s and 1990s are all grown up now. And for all the myriad ways we've integrated in the United States, we are only complete as transnational beings. Many of us have been measured in telling the next generation only bits and pieces of why we came to the U.S. Now the next chapter in a long and painful story unfolds on the evening news with dramatic images of recently arrived families and unaccompanied children fenced in bare rooms, with toddlers sleeping on the floor in overcrowded and unsanitary conditions. While we are faced with a moral crisis of the magnitude that broke our own hearts when we were children, we acknowledge the privilege that this time our lives are not endangered by impossible choices. We are emboldened now in denouncing our adopted country's inhumane stance toward our Central American brothers, sisters and children.

This moral crisis demands our outrage. Alarmingly, the Obama administration misleads the public, describing a planned surge in detention and deportations, including a "fast track" to deport minors in crisis, as "humane." Equally troubling is Obama's increased aid to the Central American Regional Security Initiative (CARSI), a militarized security model from the failed drug war, proven to increase violence.

Before thousands of the children in crisis have even had their day in court, President Obama has called for their fast-track removal. The "fast track" would put the minors through non-judicial procedures and deny them due process that is guaranteed to migrants--especially those in protected groups fleeing harm and violence. The Administration is considering changing the Trafficking Victims Protection Reauthorization Act (TVPRA). This proposed change would allow for the possibility to recklessly remove minors who might otherwise be able to pursue asylum, qualify for Special Immigrant Juvenile Status, or any other legitimate legal claim or relief. Essentially this change would require border patrol agents to screen unaccompanied Central American minors and decide within 48 hours if they'd be at risk of harm if returned to their country. The agents would have the discretion to determine the risk or lack thereof and if they determine there is no risk, the child will be deported. 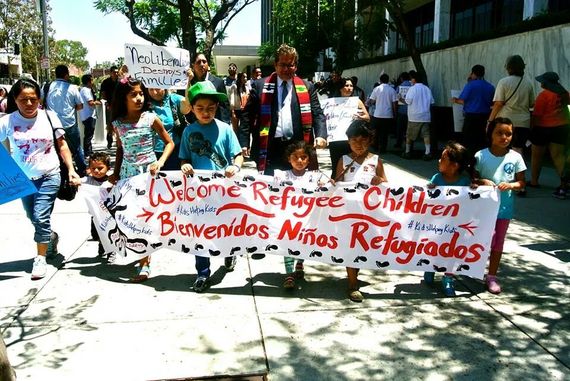 As a child, I didn't understand the gruesome violence of civil wars that forced our displacement, funded largely by the U.S. government. My family was among thousands that arrived in Los Angeles during a different Central American crisis in the early 1980s. The border-defying plight of Central Americans then and now is tied to well over a century of border-defying interventions in the region that protect U.S. interests and the profits of multinational corporations. To the detriment of the most vulnerable populations, these policies have continued to perpetuate the violence and abysmal economies that displace scores of people throughout Central America.

After devastating civil wars, the International Monetary Fund, the World Bank and other agencies, imposed policies that supported free markets but failed to invest in education and blocked the creation of jobs offering livable wages. Children who had been forced to fight in wars had access to weapons, but not schooling. The United States deported gang members in the early 1990s. Socially excluded without educational or economic opportunities, poor deported and local youth found power and survival in gangs. Profound poverty perpetuated by neoliberal policies fueled complex problems like organized crime, increased militarization, mass incarceration, human rights abuses, and in general, physical and economic insecurity.

In 2004, Congress passed the Central American Free Trade Agreement (CAFTA). Supporters argued that eliminating trade tariffs and opening access to new markets would improve the economy for all. Many studies, including my own, show that such policies only exacerbate social and economic inequalities throughout Central America. CAFTA benefits corporations, allowing them to pay workers a small fraction of what they would pay in the United States, and not enough for full-time workers to evade poverty. By supporting these practices, our government makes us complicit in deplorable conditions that force migration.

In the past, the harrowing journey north was considered too perilous for children. Conditions in the region are more desperate due to U.S. collaboration with local government. In 2009, the Obama Administration guided by then State Secretary Clinton, implicitly supported a coup that ousted a democratically elected president in Honduras. Since then, under leaders the U.S. supports financially and politically, the country became the first in the region in 2011 to implement drug war militarization via CARSI $176 million provided by the United States. Honduras is now experiencing the most violent climate in the region, with scores of murdered human rights activists and now also scores of unaccompanied migrant children.

With worsening physical and economic insecurity in the region, asylum requests from Honduras, El Salvador and Guatemala have increased to Panama, Nicaragua, Belize, Costa Rica, and Mexico since 2009. Because so many of these children's parents are already working in the United States, many will continue to arrive here, as well.

The call for prompt deportation of these children by the Obama administration and Hillary Clinton breaches due process and international human rights standards, as does the minors' detention. In the short term, children and their families must be reunited in the U.S. and receive asylum instead of being deported to known dangers. President Obama must rescind policy to fast-track deportation proceedings. Minors must also be provided safety, protection, and be released from military bases and detention centers to relatives in the United States or enrolled into community or faith-based programs as they await their proceedings.

In the long term, civil society must urge elected officials in the U.S. and Central America to reverse CAFTA and acknowledge as fact that this policy and others have pushed marginalized youth, women, LGBT, and dispossessed populations to migrate under life-threatening conditions. Security solutions must be led by civil society, human rights and public health experts -- starting with an end to failed U.S. drug war programs such as CARSI. My interviews in 2004 with children in El Salvador whose parents had migrated revealed their biggest desire was to be reunited with their parents there. Let's center the well being of families by requiring the U.S. and Central American countries to prioritize job creation, fair wages and legal protections to keep families together and prevent dangerous treks north.

While this particular crisis affects Central Americans, we fear our communities' suffering is being used by the Obama administration to expand incarceration, deportation and militarization for all. Our outrage is located within the continued crisis of an unrelenting drug war, foreign policy, and an incarceration and deportation machine that affects millions of families of color in the United States -- citizens and non-citizens alike. Our dignity and humanity are one.