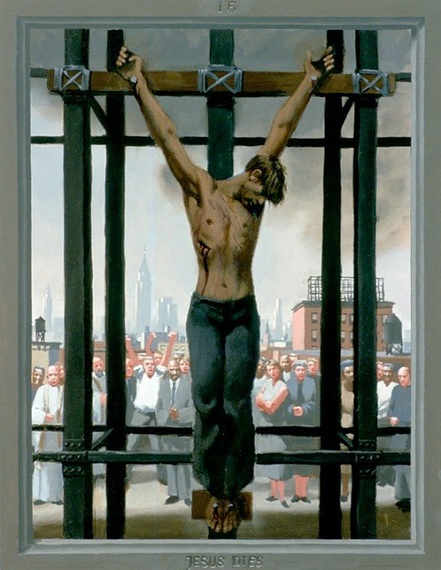 Too sexy, too violent -- these are the reasons given for repeated rejections of social-media ads for an art book with an LGBT vision of Jesus. Maybe they are just too queer.

As usual queers are on the cutting edge of setting new precedents in a legal grey area. This time we're breaking new ground over censorship in social media, especially social-media advertising.

Each ad featured images from The Passion of Christ: A Gay Vision, a book of my reflections on paintings by New York artist Douglas Blanchard. He paints Jesus as a contemporary gay man in a modern city during his final days, including his arrest, trial, crucifixion, and resurrection.

Facebook's use of keywords and image analysis to screen ad content amounts to LGBT profiling, a cyber-sexual version of the racial profiling that is a form of unlawful discrimination. They seem to be silencing the sexually marginalized, or at least pushing us further to the margins.

The obstacles that Doug and I faced when we tried to buy Facebook ads raise questions of broader importance. Do words such as "gay" and "LGBT" automatically trigger suspicion, scrutiny and screening? What is the impact on our freedom of expression when we can't even pay to communicate queer ideas?

The Passion of Christ: A Gay Vision is not pornography and shows no more nudity or violence than a standard Stations of the Cross. It is a religious art book that presents the story of Jesus' suffering, death and resurrection from an LGBT viewpoint. Jesus is joined by a diverse group of disciples who are multi-racial, young and old, queer and straight, able-bodied and wheelchair-bound. Excerpts running through Easter at the Jesus in Love Blog.

Four times the ads were eventually approved on appeal. The most recent incident happened this week. Two ads are still shut down. Facebook most often targeted ads with Jesus on the cross, shirtless but wearing blue jeans. The image, "Jesus Dies," also appears on the cover of the book. Facebook rejected it for being too "scary" as well as "adult material" and "pornography."

Strangely, the official rejection notice referred us to examples of acceptable and unacceptable ads for condoms. It is OK to say "Free condoms at your local student health center," but not "Condoms to enhance your pleasure." The implication is that sex for pleasure is still sinful in the eyes of the Facebook ad team.

The gay Passion paintings do stir emotions, but not by violating community standards with gratuitous violence or graphic sex. As the Gay and Lesbian Review Worldwide astutely noted in its coverage of the controversy:

What's interesting, in fact, is that in most of the book's illustrations it's not all that obvious that the central figure is even 'gay'.... But then there's that pesky subtitle, 'A Gay Vision,' a juxtaposition that some people might complain about, which is clearly what Facebook was afraid of. Thus it's not the visual images but the idea of Jesus as a gay man that's being suppressed.

Any ads that do manage to make it past the barriers imposed by Facebook will then undergo another kind of pressure: reactions from the public. Posts about the gay Passion often get bombarded with anti-LGBT bigotry masked as Christianity.

Typical negative comments at the Passion book's Facebook page call us "Sodomites" and threaten us with hellfire and damnation because "You are blasphemers to even suggest or hypothesize about Jesus being gay."

We also get plenty of gratitude with comments such as, "Thank you for challenging us to imagine what Christ and his ministry might look like in today's GLBT world."

Facebook seems full of nasty comments and titillating content, so Doug and I were surprised when our ads were rejected. The experience taught us that paid ads are more regulated than what users post for free, probably because the ads reach beyond one's own circle of friends.

We found out that we are in good company. For example, other gay artists such as photographer Michael Stokes have had their work removed by Facebook. 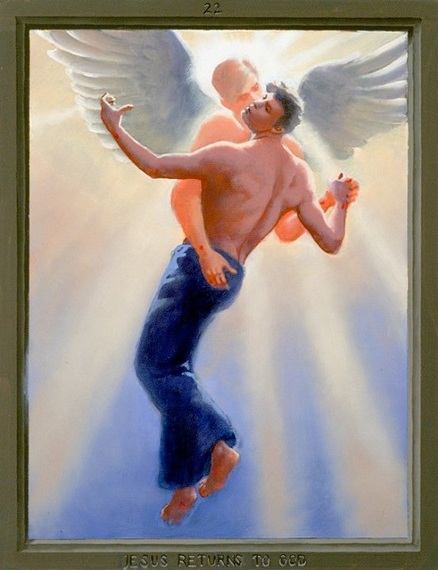 The Passion book may have received a double-dose of scrutiny because it is religious as well as queer. My insights on how religious content is regulated in Facebook ads are posted at Believe Out Loud.

Ultimately the rejections prove that the gay vision of Jesus is still needed. Every community presents Jesus in their own way. There's black Jesus, female Christa, Asian Jesus -- and now queer Jesus to heal the damage being done by homophobes in Christ's name. The Jesus of scripture upset authorities by breaking gender rules, befriending sexual outcasts, and teaching love without limits.

In that sense Facebook was right to see the crucifixion of Christ as obscene. One purpose for our ads and the Passion book itself was to call attention to the holiness in everybody, including queers. Whenever anyone commits violence against another, Christ is crucified. By witnessing his crucifixion with compassion, viewers can stand symbolically beside all who suffer.