With its vote of 5-3, the Supreme Court struck down the Texas abortion law that would have closed down all but a handful of abortion clinics in that state. With this ruling, a message was sent to all states that are legislating away a woman's right to a safe and accessible abortion: Back. Off.

I vividly recall Wendy Davis's filibuster. She became a hero to me. When she was running for governor of Texas, I asked a friend who knew her to get a copy of my book, Moral Infidelity--about a hypocritical pro-life governor whose mistress becomes pregnant--into her hands. Tucked inside was a personal note of thanks and admiration, and a check. My very first blog on my new website, was titled, "One Year Later, I'm Still Standing with Wendy." When her book, Forgetting to Be Afraid: a Memoir was published, I bought it, read it, loved it and reviewed it. 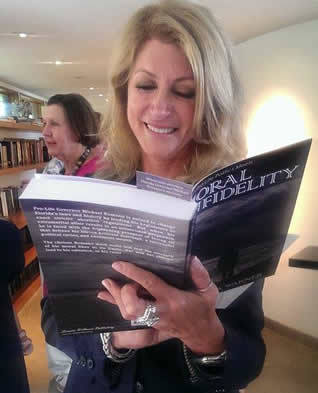 Which is why, with this SCOTUS decision, I'm so thrilled that Wendy Davis is vindicated! She won then (the deadline passed for a vote on that draconian legislation) and she has won now. Sure, Rick Perry called a special session right after her victorious filibuster to ram through the law that was ruled on by SCOTUS; but Wendy paved the way for this Supreme Court decision.

The assault on a woman's right to choose has been relentless for the last two decades. But with this decision, SCOTUS has breathed new life into Roe v. Wade. It's now time for us to nurture it, strengthen it and support it like never before.

And that starts with those of us who have benefited from that law since it was passed in 1973.

Those of us who are over 50 have reached that comfortable age when we no longer have to worry about an unintended pregnancy. For many, the issue of reproductive choice has faded in importance. But for our daughters and granddaughters of childbearing age, it should still matter--now more than ever. We who became sexually active in the '70s finally had protections in place to safeguard us from unwanted pregnancy.

Then with the Supreme Court ruling in 1989 on Webster v. Reproductive Health Services, the first crack in Roe occurred. It opened the door for states to start enacting stricter abortion legislation. It took a while, then states gained momentum. Yet generations of women who are of childbearing age did not seem meaningfully motivated to halt this persistent march back to the days of no choice. They've lived with the victorious results of a hard-won battle that raged through the '60s and early '70s. That is ancient history to them, but it isn't ancient history to those of us who saw the battle being waged and first benefited from its accomplishment.

The Women's Liberation Movement required organization, dedication, and unification to be recognized. The impetus for that kind of solidarity is not there today. The pro-life movement, on the other hand, has burgeoned and gained strength day by day. Fortunately, Planned Parenthood, NARAL, NOW, and stalwart politicians like Wendy Davis fought back on our behalf. They kept the fires burning when a flood of anti-abortion legislation was threatening to drown our right to choose.

At the age of 59, I'd had enough. I wanted to add my voice to the fight, and I wrote my first book, which was chocked full of abortion-related research but was entertaining and well written enough to win two awards. As I read, wrote books, blogged, and used podcast forums to keep women aware of the dangerous battle being waged against Roe, I wondered where the young women were who should be taking up the fight. I also wondered why more women of my generation weren't speaking out more.

You may be one of those women, younger or older, who has been active and involved; but there are too many who have not. Perhaps it is because older women have become complacent, since child bearing issues are no longer relevant. Maybe it is because younger women don't know about or can't relate to the horrors of backroom abortions. They may know women who have had an abortion-a safe, legal medical procedure; but they don't know women who died from a botched abortion. 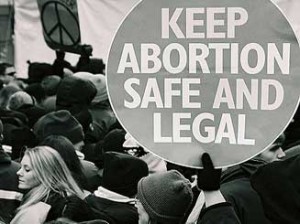 It is time for women of every generation to stop taking choice for granted. Let's acknowledge that it is up to us to keep birth control and safe abortions accessible. This is going to require the older generation's involvement. Those of us who enjoyed virtually worry-free sex must educate younger women about how difficult it was when women had no access to birth control or safe abortions.

It is time for our generation to rekindle the torch of choice, and to pass it down. It is time for us, the most outspoken, inspiring and audacious women in history, to shake women of all ages out of their complacency. We are on the verge of having one of our peers, one of our generation, one who has been pro-choice as long as we have, become the first woman president! With that, and this SCOTUS ruling, the wind is in our sails!

Our legacy should be the empowerment of younger women in constructing stronger, independent lives that aren't lived according to ideals imposed by men. It is our duty to encourage them to fight for the continued right of choice, so that they can in turn inspire the generations of women who come after them to do the same.

If Hillary Clinton is not too old to be president, we are not too old to take up this battle. The Republicans will not give up the fight, and we need to be united as never before.

Let us give the younger generation the benefit of our experience and knowledge. We lived it, so we can talk of it with intelligence and confidence. Let's start by engaging our daughters, granddaughters, and young friends in meaningful conversations about what the loss of choice would mean for them. Let's emphasize the value of their vote, and enlist their support of organizations that support a woman's right to choose.

Let us not go gently into our golden years. Instead, let us reinvigorate and do what we can now to preserve a woman's most fundamental right--the right to have total control over her own body.