Discover how breast cancer spurred this actress to tap into her healing potential through writing, and how she shares that gift with others. 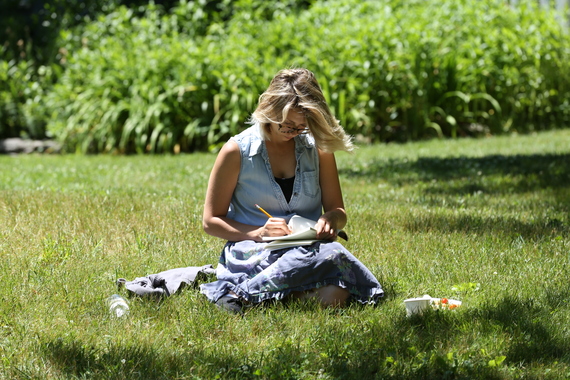 Omega: Did you always know you wanted to work in a creative field, or did you stumble upon your creative gifts?

Maia: My parents were both artists. My dad was a Broadway conductor and a well-known violinist who studied with Pablo Casals. My mother was a painter and a poet. And I grew up in Manhattan. So it was just assumed that I would do something in the arts; that was just expected. Both of my parents were competitive and pretty good at what they did, so I needed to find something that was mine. So acting found me, and I started acting professionally when I was 16. I was an actress for most of my life, and as a sort of sidebar, I wrote. Then I finally decided to go to grad school for writing because that was a passion of mine.

Omega: What are some of the biggest challenges you help your writing students overcome?

Maia: Here in Los Angeles, I have a lot of television and film writers. Some of them work on big shows and they get very frozen because, in the industry, they have to produce. They have to put product out on a weekly basis, and it's highly competitive. They have to write to very prescribed situations. They usually come to me when they're completely burnt out--they no longer feel creatively connected, they're working for a paycheck, and they've lost their joy, their passion, and their confidence. I help them to find their connection back to their original desire to write, having their own voice, and cocreating their own deep instincts, because that's what gets taken away in the business end of it.

And then I have a population who has been told all their lives that they had nothing worth saying--that their punctuation or their grammar isn't perfect, or who do they think they are to have a voice or to want to create in any way? My job there, and this is the most joyful thing I do, is to help people understand that everyone has a voice and everyone has a story. One isn't better than the other. They're just different. I really help people have the courage to share the beautiful stuff that's inside of them.

Omega: What's one of quickest ways someone could improve their writing?

Maia: I use a combination of acting technique and meditation to help people reconnect with their own creative unconscious. Everything I know about creativity is that it resides in the subconscious, in those hidden places. In order to work fully with ourselves, we need to access that creative unconscious. If it all comes from the conscious mind, it's going to be very limited to what we know and what we've experienced. The minute you go into the unconscious--to those waking dream states--you're in something much bigger, and you're able to really channel the energy, that incredible creative flow that is available to everyone.

Omega: You were diagnosed with breast cancer in 1994 and developed the Relax & Write™ method as a part of your healing process. Can you talk more about the connection between writing, relaxing, and healing?

Maia: They're all very connected actually. When I got diagnosed with breast cancer, it was the first time I've ever been sick in my life. I'd never been in a hospital. I'd never had anything wrong, and it terrified me. The thing I discovered was that I lost my ability to contact my own voice. I was so frightened. I knew I needed to process what was happening with me, and I would pick up a pen, and literally, I couldn't hold it. I held it in my fist, and all I could write was, "Help me." I was completely lost to myself. And I knew that in order for my own healing to happen, I needed to be able to reconnect with myself again and to have my voice come through and guide me.

Most writing and acting techniques are geared toward getting you out of a stuck place and helping you. I began working to develop this process, which helped me to open up to my voice during that very, very critical time for me. I did so well through my chemo and treatment that my doctors asked me what I was doing, because I was doing better than their other patients. So I told them, and then they asked me if I would do it for other patients. So I did it for several years in New York at Beth Israel Hospital for people going through traumatic illness.

When I moved to Los Angeles--I was out here with a series, you know, still acting--I volunteered at a cancer center, and one of my students who lived at that center was a former television executive. She said, "You should be doing this for writers." And I said, "Oh, okay." She gave me a couple of names, and that's how my first class got started. And then I woke up one day, and there were too many for one class, and there were two classes; then there were four classes and five classes. It all just took over my life, which is fine. I have no complaints.

Having access to the creative forces in the universe and knowing that you are part of a bigger picture can really help to marshal your own healing. We know that when we dream at night, we're working through stuff. This is true if we can do it in a waking state, too. It's that much more valuable to us to be able to, on a reliable, repeatable basis, sit down and let those energies flow, hear the chatter in our own minds and not judge it, let it go, and then wait for what is deeper, what is wiser and truer and more trustworthy to appear.

What happened with my illness--and I still do it for people going through illness--is that I needed to come back to a place of trust. When you can really deeply connect with these larger energies, you can begin to trust that you are somehow in the flow, even if it's a difficult place. You're being held by something greater than the difficulty you're in, in the moment. That's how it works for me, and that's what I try to pay forward.

Explore more in the category of Health & Healing and Creative Expression.