John B. Sparks' 1931 Histomap charting 4,000 years of human history has been making the rounds on the Internet for the last couple days, providing an overview of human civilization since 2,000 BC in a colorful and impressively-designed chart by Rand McNally.

Sparks also created histomaps of the history of religion and evolution, and "The Histomap of Religion: The Story of Man's Search For Spiritual Unity," can be yours for $275 on Ebay. But what's $275 when you can hold 100,000 years of religious history in your hands? 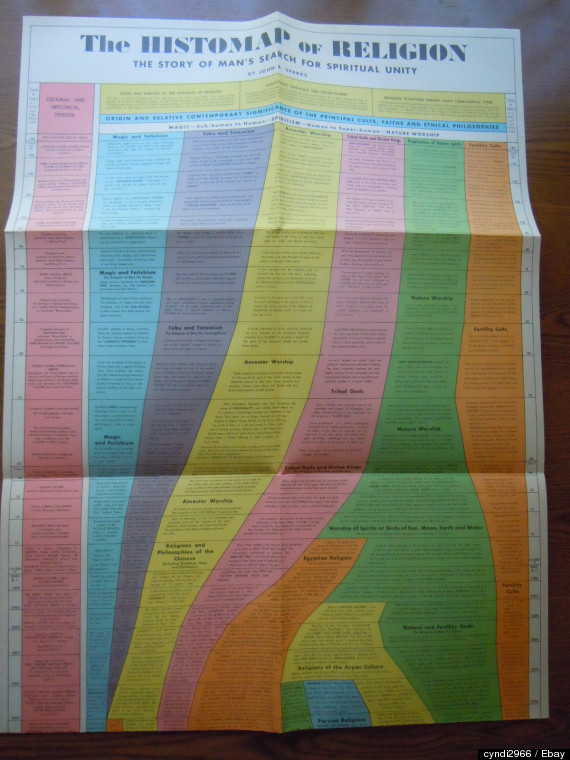 The design of the map depicts the tidal nature of religious belief as the bands narrow and widen in response to the times. Though by no means perfectly accurate, the chart's historical simplification is nonetheless compelling as it allows readers to track the rise, fall, assimilation, and genesis of faith groups.

The foreword to the chart begins with the interfaith quote:

Truth is the shattered mirror strown

In myriad bits; while each believes

his little bit the whole to own."

Published in 1947 and originally sold for a mere $1.50, the kitschy chart could probably use an update, as religious movements that have sprung up since 1950 include Scientology, the Church of Satan, Kopimism, and the Church of the Flying Spaghetti Monster.


Treasures of the Cambridge Digital Library