On a breezy summer day, I joined a group of artists and writers in the basement of the Liberty Bar in midtown Manhattan to discuss the many places religious life meets the visual arts.* Contrary to the shortsighted views of secular art critics, one thing is clear: religion is alive and well in contemporary art.

Artists are toying with and tweaking rituals until they become relevant again to a new age. Ancient sacred texts provide a warehouse of endlessly adaptable narratives, while in their bookish, printed forms they become physical objects that are parsed and pared into new shapes and designs. Symbols are utilized for compositional structures, mined for their meaningful connections, and invoke the viewer toward a contemplative repose. And in their creation and implementation, communities of people join together to collectively experience these aesthetically moving sights, sounds, smells, gestures, and bodies touching bodies. The religious and the aesthetic have never been far apart.

The day before our basement bar meeting, I was uptown at the Museum of Biblical Art, looking at the small but striking exhibition, "Back to Eden: Contemporary Artists Wander the Garden." Prominent contemporary artists in the show include Barnaby Furnas, Jim Dine, Naomi Reis, Fred Tomaselli, and Adam Fuss. Each in their own way uses the mythology of Eden to explore ongoing human themes of innocence, loss, and temptation, as well as environmental concerns. It's all the stuff that good mythologies are made of. (Hint: you don't have to believe Adam and Eve literally existed to "believe in" the mythology of it.)

Most anyone over forty can recall the controversy when Alphonse D'Amato tore up an image of Andres Serrano's Piss Christ on the senate floor in 1989. Or when New York City mayor Rudy Giuliani condemned the Brooklyn Museum of Art for its inclusion of Chris Ofili's Holy Virgin Mary in the show "Sensation" in 1999. Or when the National Portrait Gallery in Washington, DC caved to pressures to remove David Wojnarowicz's Fire in my Belly video from its show in 2010. The simplistic view would say these are all anti-religious pieces, except for the fact that every one of the artists spoke up about their own faith, and how art became a way of struggle with their spiritual lives.

Artists, as well as the audiences of art, use aesthetic forms to struggle with sexual, religious, ethnic, racial, and gendered identities; to find forums for healing; to develop socially progressive attitudes; and often to provide environments for the supremely ethical act of laughter and forgetting.

So, it's not really that there is a great divide between art and religion. It's just in the eye of the beholder, and one wonders if that secular eye isn't getting a little jaundiced and myopic.

* The meeting took place under the auspices of the Society for the Arts, Religion, and Contemporary Culture, founded in the 1960s by theologian Paul Tillich and Alfred H. Barr, Jr, the first director of the Museum of Modern Art in NYC. Erling Hope organized the event. 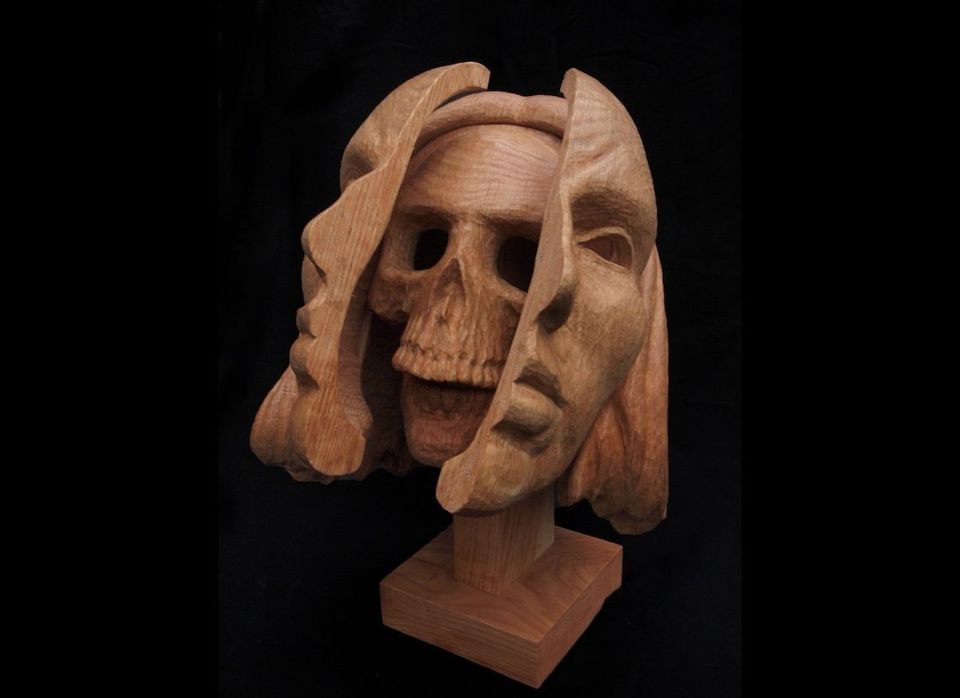 1 / 7
Anthony Santella, "Transformations II." Oak
Santella: "My sculptural work draws on the ritual woodcarving of medieval Europe, Africa and Pacific Northwest indigenous culture to explore modern dreams and nightmares. In adapting these forms to modern figures and concerns I want to challenge the viewer to see their daily decisions and trials in epic religious terms. I view creating intricate figures from storm downed trees and discarded materials as both an environmental statement and an act of resurrection."