The spiritual nature of surfing is something Surfer Magazine editors encounter time and again in letters and stories from aficionados. One editor wrote in an editorial, "Is God A Goofyfoot?":

I could spend literal hours every day reading mail about people who claim surfing as a salvation. So this sparked a debate here in the hallowed halls of surfdom: Could surfing be a bona fide religion? Is surfing a religion?

Surfer and author Steve Kotler took this concept and ran with it in his book, West of Jesus, excerpted on The Inertia. He refers to the "watery communion" many surfers experience among the waves. Kotler writes:

At the far end of this spectrum are the surfers who believe that since the ocean was the place where life began on this planet, the act of riding on a wave allows the surfer to momentarily connect with this living memory. In Jungian terms, surfing gives the surfer access to the collective unconscious of the planet. Perhaps it was for this reason that Timothy Leary called surfing our highest evolutionary activity.

Leary, a famed American psychologist and psychedelics researcher, was reportedly a surfer himself, and coined the term "evolutionary surfer." In an interview with Surfer Magazine in 1978, Leary said that both surfing and evolution dealt with waves, which he called the "fundamental structure of nature."

Surfing is "just the individual dealing with the power of the ocean, which gets into the power of lunar pulls, and of tidal ebbs and flows; and it's no accident that many, perhaps most, surfers have become almost mystics," Leary told Surfer.

Both Leary and Kotler suggest that there is something essential about the ocean itself that promotes mystical experiences and that surfing may be a key way to tapping into this power. Surfer's original question -- is surfing a religion? -- may not be completely off base.

"It's no accident that many, perhaps most, surfers have become almost mystics." Religion scholar and conservationist Bron Taylor studies earth-spirituality and environmentalism and has referred to surfing as an "aquatic nature religion." In an article for the Journal of the American Academy of Religion, Taylor commented on the growing trend of "soul surfers" who take a much more spiritual approach to surfing than the average sports enthusiast.

This subset of the global surfing community should be understood as a new religious movement — a globalizing hybridized, and increasingly influential example of what I call aquatic nature religion. For these individuals, surfing is a religious form in which a specific sensual practice constitutes its sacred center, and the corresponding experiences are constructed in a way that leads to a belief in nature as powerful, transformative, healing, and sacred.

World-champion surfer Kelly Slater described the sport as womb-like in an interview with CNN, hinting at the kind of sacred experience Taylor identified.

"Surfing is my religion, if I have one," Slater said. "The barrel [the hollow of a breaking wave] is really the ultimate ride for any surfer. It's the eye of the storm. Some guys say it's like being in the womb."

Tom Blake, a surfing legend who died in 1994, may have offered the best explanation for the relationship between surfing and religion in his 1969 essay, "The Voice of The Wave." After decades of surfing and studying the sport's cultural roots in ancient Polynesia, Blake developed the concise philosophy: Nature = God.

While this equation might might resonate for some surfers, plenty of them also come from traditional religious backgrounds and believe the sport supplements, but doesn't necessarily define, their spirituality. California friar Father Christian Mondor is a good example.

Mondor, Franciscan friar and Catholic priest, bought himself a surfboard for his 70th birthday, having never surfed before. Now in his late 80s, Mondor's community in Huntington Beach, California refer to him as “The Surfing Priest.”

He's not just a priest who surfs or a surfer who happens to be a priest. Mondor's faith seems to be deeply rooted in a connection with the ocean as God's creation. At a 2012 "Blessing of the Waves" ceremony, which brought people of many faiths together to honor the ocean as a crucial ecosystem, Mondor commented:

"In the religious symbolism, water is one of the great images of life and energy. It’s a symbol of God’s presence.”

Water as a "symbol of God's presence" is perhaps never more acutely felt than from a board in the middle of the ocean, surrounded by waves. It is from that place of alternating stillness and activity, Mondor has said, that the spiritual essence of surfing arises.

“Surfing has a spiritual side, it’s a time of quiet contemplation,” he said in an interview with Surf City News. “The time between the waves is a wonderful time to pray and be thankful. As you rise and fall with the swells, there’s a real beauty and peacefulness to it. It’s just a terrific feeling.”

Buddhist surfer Jaimal Yogis described a similar relationship between waves and spirituality in an article for Shambhala Sun, "The Zen of Surfing." He relayed the story of attending a dharma talk by teacher Ajahn Amaro, who used the metaphor of surfing to explain samsara, the Buddhist concept of birth and death cycles.

Yogis took the comparison a step further to say that surfing not only helps people understand samsara but can also help them handle the chaos it occasionally produces. "I believe surfing can teach us to ride samsara, even enjoy it, like a wave," Yogis wrote, "while still seeing through its illusory nature."

He continued: "One of the highest insights in the Mahayana and Vajrayana Buddhist traditions is to realize that samsara is, in fact, nirvana: that there is no need to escape because everything is originally pure and perfect. In a small way, surfing has begun to teach me this." 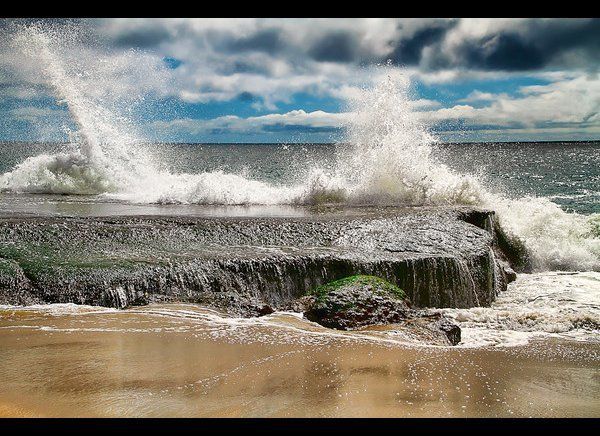 1 / 35
A Grain of Sand by Robert William Service
If starry space no limit knows And sun succeeds to sun, There is no reason to suppose Our earth the only one. 'Mid countless constellations cast A million worlds may be, With each a God to bless or blast And steer to destiny. Just think! A million gods or so To guide each vital stream, With over all to boss the show A Deity supreme. Such magnitudes oppress my mind; From cosmic space it swings; So ultimately glad to find Relief in little things. For look! Within my hollow hand, While round the earth careens, I hold a single grain of sand And wonder what it means. Ah! If I had the eyes to see, And brain to understand, I think Life's mystery might be Solved in this grain of sand.