Religious congregations are warming up to LGBT issues more and more, according to the results of a recent study out of Duke University.

Conducted by Duke sociology professor Mark Chaves, the National Congregations Study investigated the shift in acceptance of gay and lesbian congregants from 2006 to 2012 -- which rose from 37.4 percent to 48 percent in that time frame. 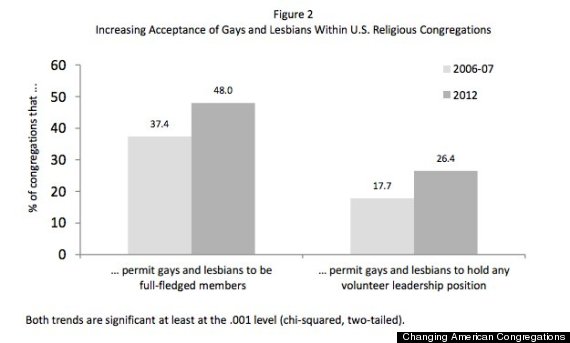 Researchers asked religious leaders from 1,331 different American churches, mosques, temples, synagogues and other houses of worship, whether openly gay or lesbian couples would be allowed to become full-fledged members of their congregations. The shift toward greater inclusivity reflects the changing landscape of American political and social life -- which on the whole is more accepting of LGBT issues than ever before.

The positive trend for LGBT people were not universal in the study, with Catholic churches exhibiting somewhat less acceptance of gay and lesbian members in 2012 than in 2006. When asked, Chaves told HuffPost he believed the decrease may be correlated to an "increased salience" of homosexuality in the Catholic Church as evidenced by the recent firings of gay teachers in parochial schools and Catholic organizations.

While the Catholic Church's stance on homosexuality remains seated in the somewhat vague but hopeful words of Pope Francis, "Who am I to judge?", other church bodies have taken more definitive action to promote LGBT equality. In June the Presbyterian Church (USA) voted in a landmark decision to allow same-sex marriages, following in the footsteps of the U.S. Episcopal Church which made the same decision two years prior.

“The increasing acceptance of gays and lesbians is a well-known trend in America,” Chaves said in a Duke press release. “Churches are no exception.”