Despite gains in the number of Americans who identify as atheist, agnostic or having "no religion" at all, it's well known that the nation is largely one of religious believers. In polls over the past two decades, a slim majority of Americans have said they find religion to be "very important" in their lives, while smaller but consistent shares of residents have said they attend worship services weekly or monthly. 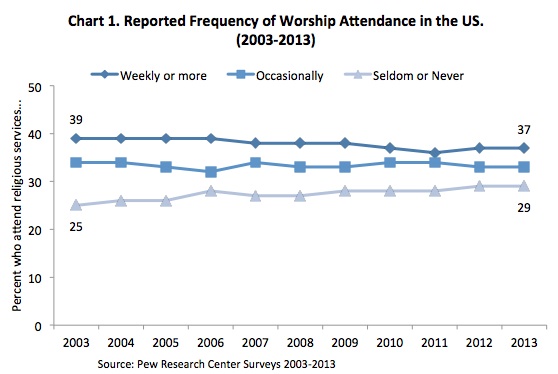 But it's harder to count how often people actually show up in the pews, the temple, the mosque or any other place they go to encounter the divine, and the statistics religious group keeps on attendance have often differed from what pollsters tend to find.

That's one reason why a Washington, D.C.-based polling firm designed a unique survey method to measure if there's truth to what observers of religious trends have said for years: that social pressure makes people exaggerate how often they go to religious services.

In results it released Saturday comparing how people responded to questions about religious attendance when asked over the phone by a live person compared to when answering an online survey, the Public Religion Research Institute concluded that, indeed, Americans tend to stretch the truth. The organization conducted two surveys using similarly sized, nationally representative samplings of Americans who were asked the same questions.

On the phone, 36 percent of Americans said they attend religious services weekly or more often, while only 31 percent said the same when answering the question online. Meanwhile, 30 percent of phone respondents said they seldom or never go to a weekly service. Online, that share jumped to 43 percent.

"The existence of religious participation inflation demonstrates that church attendance remains a strong social norm in the U.S.,'" Robert P. Jones, co-author of the study and CEO of the institute, said in a statement. "The impact of these norms – what social scientists call ‘social desirability bias’ – is that respondents talking to live interviewers on the telephone are less willing to admit lower levels of participation in an activity deemed to be socially good. Respondents completing the survey privately online are less apt to feel this pressure." 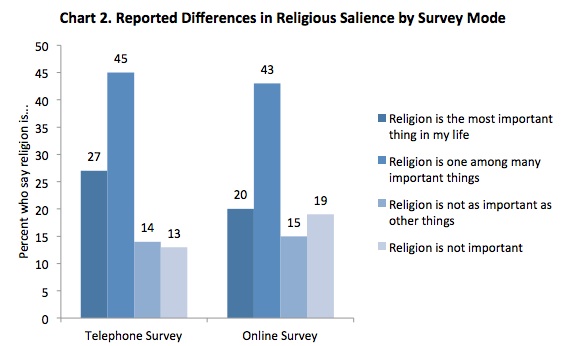 While pollsters saw the trend across religious and other demographic groups, three stood out for how much they overstated worship attendance: white mainline Protestants, Catholics and adults between 18 and 29-years-old.

Even among the "nones," the group of one-in-five Americans that have no religion in particular, Americans exaggerated their attendance, the report added.

Differences in responses were smaller among black Protestants, white evangelicals and older Americans. There was also slight difference between political groups, with those who said they were liberal being more likely than conservatives to have bigger gaps between phone and online responses. 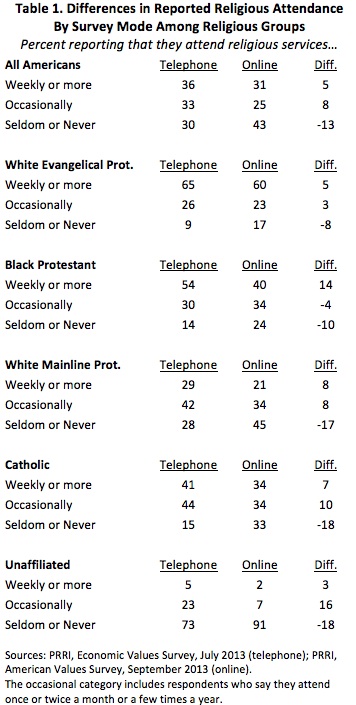 While it's impossible -- without individually tracking religious attendance among people who were polled -- to definitively say respondents were inflating their religious practice, researchers said in the study that they believed comparing telephone and online responses was scientifically sound. Their results broadly matched similar previous studies, such as ones done in the 1990s before the widespread use of online polling.