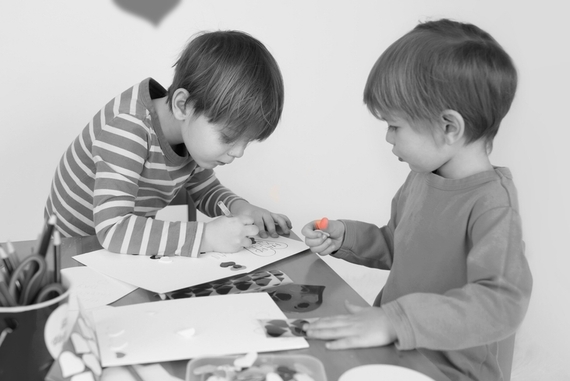 "Crisis-talk," including talk about religious crises, dominates media and discourse currently. Terrorism. Migration. Economies. Morality. These and others are big-screen topics, but they reflect the small accumulating evidences.

Pandit Nehru observed that "every little thing counts in a crisis." These November days, suddenly, an apparently "little thing" won big attention, and it promises, or threatens, more. It has to do with a single experiment at The University of Chicago (see "Sources" for details).

A few raised questions or offered critiques: "Skewed study claims atheist children are more altruistic then 'religious' children." "So religion makes you meaner? Not according to the evidence."

The trigger for headline-writing and mass-effect blogging was an experiment by Jean Decety, a developmental neuroscientist at the University of Chicago, who used the findings of his survey to reach into the "public religion" sphere, which occupies us. Decety gave a cultural conclusion: "Overall, our findings...[support] the idea that the secularization of moral discourse will not reduce human kindness -- in fact, it will do just the opposite."

In Decety's laboratory, as reported in Current Biology, about 1170 children (aged 5 to 12), in six countries participated. 43 percent were Muslim, 24 percent were Christian, 27.6 percent were non-religious, and five or six other faiths were represented by a few kids.

"They were asked to choose stickers and then told there were not enough to go around for all children in their school, to see if they would share." Children from Christian homes shared 3.3 stickers, from Muslim homes, 3.2, but those from non-religious homes shared 4.1 stickers on average.

The critics of this "skewed" survey offered plenty of criticisms.

For example, the researchers overlooked the many international studies which have found opposite, or at least qualifying, recent-past findings. "The authors do virtually nothing to test alternative explanations," wrote one, who was puzzled that the experimenters were not puzzled by the difference between their findings and others.

Most cheered were secularists such as Keith Porteous Wood of the UK National Secular Society: the report was "a welcome antidote to the presumption that religion is a prerequisite of morality."

The surveyors themselves said that the findings "call into question whether religion is vital for moral development." Prof. Decety's comments were consistently along this line. Almost all the champions of the survey and its findings agreed, sometimes almost gleefully.

One positive possible response from the "pro-religious" would be to accept, if guardedly, the announced findings, and use them to offer criticism from within and for the external moral efforts of the religious communities. They will read the survey and the headlines as a judgment on their failures to educate well and to help children develop moral character.

But all that is for another month after November with its reports of "mean" religious children and the morally "non-religious." Yes, as noted, Nehru was right: "every little thing counts in a crisis," including the hoarding of stickers by 1170 children in six nations.

Smart, Simon. "So religion makes you mean? Not according to the evidence." ABC The Drum, November 12, 2015, Opinion.