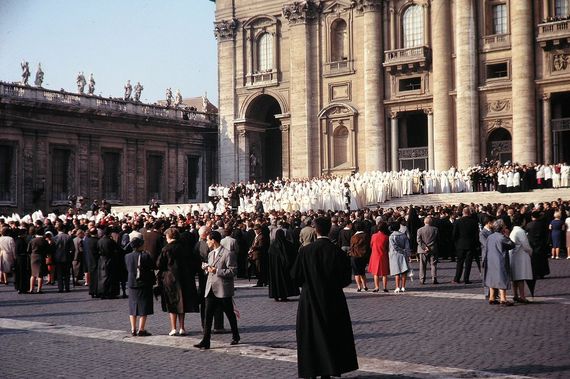 December 7th: Sightings notes the date because 50 years ago today, by a vote of 2,308 to 70, the "Council Fathers" at the Second Vatican Council voted to promulgate Dignitatis Humanae, "On the Dignity of the Human Person."

Regarded as one of the main achievements of the Council and as signaling a drastic change in Roman Catholicism's official view of the religious rights of all, the lop-sided vote does not reflect the high drama of the bruising doings in and around the Council meetings in St. Peter's Basilica.

Two elements stood out and stand out:

1) While not all traditionalist Catholics agreed, the document did represent a change in "unchangeable" Catholic teaching through the centuries, an observation that was challenged forcefully in pre-1965 papal documents. Rome can and did change!

2) The substance of the change had immediate, real-world consequences -- including in the United States. Present-day Catholic historians remind readers that until December 7, 1965, this teaching was "on the books:" where Catholicism was the majority faith, the Church should be privileged, at the expense of all other faiths, and could/should seek to enforce limits against the expression of error as voiced and acted on by "everyone else." No more.

At the time, The Christian Century often voiced anti-Catholic sentiments because of its fears that a growing Catholic population portended a take-over by "Rome" and the loss of freedoms by everyone else. In 1964, its editors sent me, a full-time professor but a journalist-by-moonlight, to report on the issues we expected would be voted on in Session III of the Council. Some intrigues by "higher authority," however, forced the final vote to be postponed.

Still, we reporters could already observe the documentable momentum reflected later in the lop-sided December 7 vote during Session IV, in 1965. And, we Protestants and others were amazed to hear the vehemence of the negative reactions by most of our Catholic colleagues when the vote was postponed and, many feared, stood no chance.

After December 7, 1965, the landscape of religious-freedom activities changed. A good use of this Golden Anniversary is to ponder what to do in the face of the inevitable limits of the achievement.

Compare and note the parallels drawn by the historians who deal with the events surrounding the passage of the First Amendment to the U. S. Constitution of 1789 in Philadelphia and 1965 in Rome. On occasion they conclude that with the First Amendment -- and, now, shall we add with Dignitatis Humanae? -- the promulgators did not solve the religious freedom issue.

Or, some say, they "solved the religious freedom issue by not solving the religious issue." It is insoluble, but was addressable, often creatively, in 1789, and, for Catholics and their neighbors, in 1965.

Debates over the meanings and extent of religious freedom in America are intense in contemporary politics, as reflected in conflicts relating to all three branches of government. This day of celebration over Dignitatis Humanae is not the day to take up sides in these debates; Sightings authors try to address them in many weekly e-columns. The occasion does, however, license reflection on the need for caution, as always, when dealing with relations of "church and state."

Montesquieu, a philosopher much favored by America's constitutional founders, argued that the way "to attack a religion is by favor, by the comforts of life, by the hope of fortune; not by what reminds one of it, but by what makes one forget it . . ."

It was painful for American colonists who in 1789 clung to "religious establishment," and it is painful now for those who seek "religious privilege." So it was difficult for official Catholicism to recognize a need for change and to support religious liberty as a priceless benefit for all.