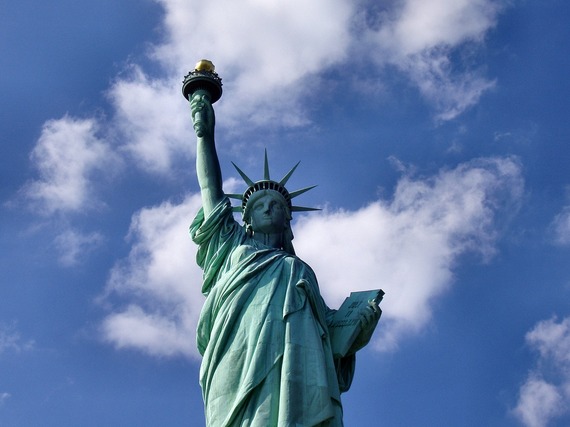 The issue of religious freedom is very much in the news again, with a variety of bills and laws giving people claiming religious freedom the right to refuse service to people of different sexual orientations and justifying the denial of some people's civil rights, again based on gender, sexual orientation and sometimes even religion. In addition the seemingly never-ending debates over abortion rage on, also with religious overtones. I would like to offer some simple ground rules around the whole discussion of religious freedom and abortion, both from a civil and a spiritual perspective.

First, freedom of religion should refer to our freedom to express our spirituality as we see fit, both individually and through collective practice. And that is one of our founding principles. But does that give us the freedom to discriminate? No, both based on our civil agreement and on spiritual grounds.

Our agreement as a nation is that we are all equal under the law. Now we know that that principle has never been practiced perfectly. When we were founded, we agreed that "All men are created equal," and that proposition was already discriminatory, because it applied only to men and not to women, and even men were not equal if they were black, since slavery was rife in young America. So we were really saying that all white men were created equal. Nevertheless, the principle of equality was part of our founding principles, and the history of this nation, and in fact in many ways the history of our world, exhibits a gradual expansion of the principle of Oneness applied to more and more classes of people.

This is our recent history as well. Women won the vote in the early 20th century, the franchise was effectively expanded to people of color through the voting rights act of the 1960s and the right for gay people to marry has finally been granted. The expansion of rights to more and more kinds of people may be under attack, but the general movement of history has been in that direction. And that is also occurring in nations overseas where, for example, women are fighting hideously discriminatory laws that keep them virtually enslaved in many places.

Similarly, then, if the claim of religious liberty does not give you the right to break the law when it comes to murder, then the claim of religious liberty is not absolute. So we have already determined in fact that if your desire to practice your religion impinges on the rights of others, your religious liberty is limited. In this way, if you have a religious objection to homosexuality, you have a right to not be homosexual in your own practice. You do NOT have the right to impinge upon the civil rights of gay people. If your religious belief is that Christianity is the only way to God, that does not give you the right to restrict the practice of Jews or Muslims or even atheists, because those rights are protected by our laws and our fundamental spiritual and founding principle that all people are created equal and should be equally protected under the law.

On a spiritual plane, this could not be clearer either. If the essence of religion is spirituality, the essence of spirituality is Oneness. In some religions, that principle is expressed as "God is One." It is odd to me that people use religion to justify the most unspiritual behaviors, behaviors which deny others their beingness in God's universe. I won't elaborate on this point here, because I want to discuss abortion as well. But in my mind, religion cannot be used as a cover for discrimination or bigotry, legally or spiritually, based on equal rights in our civil society and the essence of spirituality itself.

But now let's take on one of the stickiest topics of all: abortion. Do those who believe abortion should be illegal have the right to inhibit other people's right to choose? Let's look at this question from the same angle we used to discuss all freedom of religion. We have a right to do what we want if it doesn't impinge on the rights of others. On the face of it, you could say that women have a right to abortion because no one else has a right to impinge on their rights over their own bodies. But here's the rub. In the real world, we are connected, and our actions don't only impact us.

Here's a totally different example, but one that I use to help lay the foundation for the rest of this discussion. If you choose to smoke cigarettes, you have that right. But you don't have the right to smoke in a public place, because you are impinging on my right to breathe clean air. But this gets complicated, too, because even if you don't smoke in my presence, you might be smoking in the presence of your children, whose health is impacted by your smoking. And if you smoke, your health may be negatively impacted, which lands you in the hospital, which impacts all of us in the cost of healthcare.

So back to abortion, how much more so is the abortion conversation complicated by the fact that there is a mother, a biological father and a child. Whose rights prevail? If you claim that women have all the rights, then when does your right as a woman impinge on the rights of the father and the child? If you totally oppose abortion, how can you claim that the only one with rights is the fetus? Does the mother have no rights? Does the woman who is raped, the woman where birth control failed, the woman who can't handle a pregnancy physically or emotionally have no rights to life, liberty and the pursuit of happiness? That is illogical. At the same time, does the child have no rights?

On a simple level, the question comes down to when does the fetus become a child with rights, and many people agree with that approach. But we rarely have this kind of discussion, because moralism, polarization and self-righteousness have muddied the picture. To me, it is absolute nonsense to claim that a couple of cells has rights, but the woman does not. On the other hand, it is equally nonsense to say that the child has no rights before it is born. Instead of the vicious, moralistic and strident arguments we have about abortion, why don't we have real conversations about how we can determine the right point in time when abortion should be banned, except under compelling circumstances? Why don't we have that conversation in a way that is not shaming or high and mighty?

That's because we get caught up in the self-righteousness of both the women's movement and the anti-abortion movement. And I would like to share once more that the religious cover for the anti-abortion movement is deeply flawed. Many people have demonstrated the spiritual irony that many in the "pro-life" movement care more for the protection of the fetus than for the child, simultaneously trying to block abortion while denying poor women and children financial aid or now even food stamps. But it is also time to look at the hypocrisy of using highly charged moralistic arguments such as the sanctity of life. How many people who sanctimoniously justify denying women the right to abortion use the argument of the sanctity of life, yet they eat meat or fish. I suppose the sanctity of life only includes humans. How many refuse to eat a carrot because its life is destroyed when picked from the ground? And how equally ridiculous is it to make an absolute out of the woman's right to choose, as though there are no other beings whose well-being is at stake.

It is time for all of us to get off our moralistic, preachy high horses and start using fundamental common sense. Religious liberty cannot be a cover for bigotry, and nobody's rights trump the rights of everyone else. Whether it is the issue of gay marriage or abortion, we have principles that we have agreed upon, the principles of equal protection under the law. And we have the movement of history toward greater Oneness and inclusivity.

Both our civil evolution and our spiritual beliefs coincide in this. Let's get honest. Let's get real. And let's start using our principles to cut the rhetoric and find the right path for the highest good of all.

Beth Green is founder of TheInnerRevolution.Org, host of Inner Revolutionary Radio on VoiceAmerica.com and creator of Beth Green TV & Radio on YouTube. You can download a free version of Beth's book Living with Reality at www.theinnerrevolution.org. And follow us on Facebook where we're building an online community of people who are engaging in conversations that are honest and real.