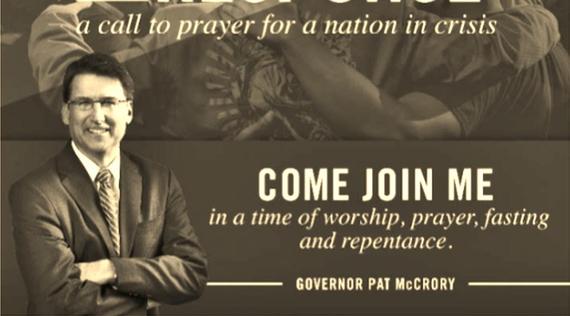 In both Pat McCrory's HB 2 and Molière's Tartuffe, unwitting victims are fleeced by people pretending to be virtuous. Tartuffe fleeces a wealthy man named Orgon. HB 2 fleeces every worker of employment protections including the right to sue in state court for discrimination based on "race, religion, color, national origin, age, sex or handicap." (Those still doubting that please click here.) In both cases, the same ancient three-part strategy is used against unwitting victims who can even admire (at least at first) the very man that fleeces them. Using Molière's classic tale to explore this ancient strategy not only arms us against the McCrorys of the world. It also reminds us how classics not only entertain but teach and prepare us as well. Please follow me--this won't take long.

Part One of the Old Strategy. "Virtuous" hypocrites must of course first fool and hook their victims while also fooling the rest of us who might otherwise help the victims. To do this, operators like Tartuffe and McCrory make loud shows of "virtue." Thus, Orgon unwittingly describes Tartuffe's use of part one of the old strategy against him (the translations are mine and I don't claim they're great by any means):

Each day to church he [Tartuffe] came, with air so sweet,
And fell upon his knees beside my seat. . . .
Though much in pain (he couldn't hide its sound)
His humble kisses rained upon the ground.
And as I'd leave he'd always come before
To offer holy water at the door. . . .
I gave him gifts but he'd then modestly
Always give half the gifts right back to me. . . .
And when I would refuse his compromise,
He'd give half to the poor before my eyes. . . .
His conscience even grieves at things so slight
As having picked in prayer a tiny flea
He thinks he crushed to death too angrily. 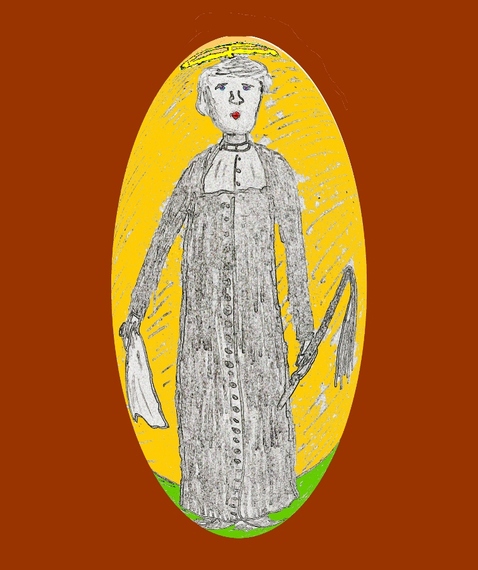 In HB 2's case, the loudly-feigned virtue jumps from fleas to (among other things) loudly feigning concerns about the "natural" order of bathrooms and the safety of women in them. However, the loud concerns and "virtue" here must have been feigned for at least two reasons. First, there was no real evidence any harm was coming--in fact the evidence ran the other way since transgender people had already been using the restrooms at issue. Second, any purported virtue must have been feigned because HB 2 STRIPS WORKERS OF THEIR STATE CAUSE OF ACTION FOR RELIGIOUS DISCRIMINATION. There can't be anything virtuous about that regardless of what one may think of the rest of the bill. Unfortunately, wrapping themselves in such false virtue not only allows hypocrites to hook their victims. It also allows hypocrites to wield false "virtue" against those trying to expose them (no pun intended). As a wise character puts it in Tartuffe:

. . . [T]here's nothing that's less dignified
Than zealots shelled up in their fake outside . . . .
They're good at mixing up their zeal with vice.
They're prompt and mean and full of artifice.
To dupe another they will slyly hide
Behind the claim that they are on God's side.
The danger they present is treacherous--
They use arms we revere when striking us.

I'll no doubt be criticized for criticizing McCrory's pseudo-virtue on HB 2. "Virtuous" hypocrites understand well the power of their disguise. Let me therefore wholeheartedly agree with other words of the speaker just quoted:

There's nothing in the world more beautiful
Than pure beliefs held by the dutiful!

Part Two of the Old Strategy. To reinforce their power, "virtuous" hypocrites often attack some people (especially those perceived as weak) while pretending to elevate others (often the very people they fleece). Such attack and elevation serve two purposes. They make the person or persons controlled feel superior by virtue of association with the hypocrite. That creates a useful, tighter bond between the victim and the hypocrite. Additionally, attacking a scapegoat draws attention away from the acts of the hypocrites themselves. In Tartuffe, we see attacks on household members subservient to Orgon while Orgon himself is elevated as Tartuffe's follower. Thus, Orgon admires Tartuffe's divisiveness while oblivious to his own victimization:

All those that follow him [Tartuffe] find peace that's pure,
And see the world as nothing but manure.


Orgon believes Tartuffe has raised him above the worldly dung and thereby misses Tartuffe's misdeeds. Similarly, the Tartuffes behind HB 2 have tried to "manure" and scapegoat the LGBT community, a move that is backfiring today just as Tartuffe's plans backfired on him when law (through the King) finally set things right. I have no doubt the law will do the same with HB 2.

Part Three of the Old Strategy. Finally, "virtuous" hypocrites reinforce parts one and two of their ancient strategy by twisting and hiding rules and facts as necessary. For a good description of this art, just hear Shakespeare's Richard III:

... I sigh and, with a piece of Scripture,
Tell them that God bids us do good for evil.
And thus I clothe my naked villainy
With odd old ends stol'n forth of holy writ,
And seem a saint when most I play the devil.

In HB 2's attack on the LGBT community (not to mention its attack on all other workers by taking away their state right to sue for employment discrimination), transgendered people are twisted into fictions of straight men putting on dresses to peep at women in restrooms. As to Scripture itself, didn't St. Paul say that there are no males or females in Christ (Galatians 3:28)--words which are directly on point here. And what about the golden rule? How can that rule (unless twisted beyond recognition) permit the damage HB 2 does to all workers including the LGBT community? In fact, Tartuffe is right on point regarding HB 2's quietly tucking away the damage done to all workers under cover of the "bathroom" part of the bill:

The only evil's evil one can show . . . .
And what makes scandals bad? Publicity.
Thus we don't sin if sin's done quietly.

Concluding Thoughts. So what can be done here and in the future when hypocrites under cover of virtue come after us? Molière shows us we can quickly and easily recognize them by focusing on their ancient strategy. The first part of this old strategy requires "virtuous" hypocrites to bring attention to themselves. It is an easy rule of thumb that the truly virtuous have no need or desire to promote their virtue. Suspicion should be aroused whenever we encounter self-advertised virtue. The hasty and noisy passage of HB 2 is full of such warning. Since the whole purpose of catching victims is to fleece them, monetary gain through "virtue" also marks the hypocrite. Tartuffe began fleecing Orgon from the outset: he returned only part of Orgon's "donation," keeping part for himself. The business interests that pushed HB 2 have also received considerable gain by extinguishing the state law right to sue for discrimination based on religion, race, and the other reasons noted above. The virtuous clamor and monetary gain should be more than enough to raise suspicion. Focusing on part two of the ancient strategy also helps. Has a wedge been driven between groups of people? Has a group been scapegoated? Focusing on part three of the old strategy helps as well. Have facts and scriptures been twisted? Additionally, of course, one should always look at any other relevant facts unique to the particular situation. Here, would those truly concerned with the welfare of the women and children HB 2 purports to protect turn down over four billion dollars in Medicaid money that would truly alleviate the suffering of sick women? For an up-to-the-minute tally of dollars Medicaid dollars turned down, click here. Would those truly concerned with the welfare of women and children slash state unemployment benefits to the low levels we now have? Ask these questions and the answers are obvious.

Let's heed these warning signals not only with respect to HB 2 but with future acts of "virtuous" hypocrisy as well. Let's also take this comparison of tales as a reminder of the importance of the humanities. A person already familiar with Mr. Tartuffe is no doubt better prepared when he encounters Mr. McCrory. (Might this also help explain the shakeups at UNC and McCrory's jibes at the humanities reported here? I would say so. I'm proud by the way to stand in the photo below beside former UNC head Tom Ross at Greensboro's Blandwood. A Davidson graduate and former President of Davidson as well, Tom Ross fully appreciates the importance of the humanities. He's the type of role model we need to lead higher education.) 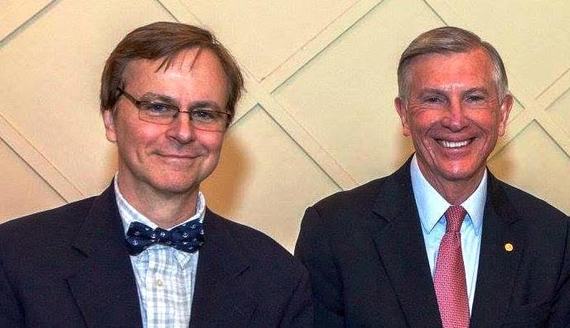