What's more, a law repealing protections to LGBT citizens was just passed in North Carolina, and the state legislature of neighboring Tennessee passed a bill that would make the Holy Bible the official state book. The latter is expected to be vetoed by the governor. While these laws will be challenged in the courts, worried observers might find themselves concerned by this wave of vitriolic bills enacted in the name of religious liberty.

Could this be the start of a renewed era of evangelical Christian dominance in American politics?

Rather than these laws signaling renewed influence of evangelical Christianity on American politics, they are merely a symptom of two basic realities: 1) Christianity -- and religion as a whole -- is slowly dying, both in the United States and worldwide, and (more importantly) 2) Christianity is gradually losing the privileges it once held in American civic life.

American evangelical Christianity is losing its influence. These bills being proposed, along with other expressions of their religious-persecution complex -- including movies such as God's Not Dead and A Matter of Faith -- are a reaction to this fact.

To be certain, membership in organized religion is declining in the United States and worldwide. While the decline is very gradual, it is definite. A comprehensive study conducted by the Pew Research Center found that noticeable declines have been observed among those who are affiliated with any specific Christian denomination across the board.

However, the percentage of Americans who identify as evangelical Christian has dropped very little compared to other denominations, down from 26.3% in 2007 to 25.4% in 2014. A decline in Sunday attendance alone would be insufficient to explain this wave of religiously-motivated laws and movies, especially since many of these laws are being enacted in states where evangelical Christianity--the primary culprit behind these laws--is most prevalent. So what's the real cause?

Although evangelical Christianity has been relatively immune to the declines in religious participation seen in other denominations, the overall decline in Americans' religious affiliation has resulted in the corresponding growth of religiously unaffiliated individuals. This growth among non-religious individuals has almost certainly resulted in the increasing secularization of society that we see.

Where town council meetings used to be initiated with a prayer (particularly ones that mentioned Jesus by name), policies are being adopted prohibiting explicitly religious invocations. Where government buildings would display Ten Commandments monuments or, during December, display the nativity of Jesus, lawsuits have resulted in such displays being taken down. In other words, the number of non-Christians has grown to a point where they collectively have sufficient influence to overturn decades--even centuries--of Christian privilege.

To any fair-minded person, these changes were simply put in place to ensure Christianity is not given special deference. But unfortunately, many Americans have lived their entire lives in a society that puts Christianity on a pedestal. In parts of this country, proclaiming conviction in your faith is often a de facto prerequisite for being elected to public office. Many Americans view Christian and non-Christian as being tantamount to moral and immoral. For many Americans, realizing they live in a society wrought with privileges granted to their religion is like a fish realizing that it's wet.

Much like a fish out of water, some Christians are having trouble adjusting to a secular society. And much like a fish out of water, flailing about, some Americans are reacting as they see fit. This reaction is evident both in the laws described previously, as well as an enormous spike in Christian films (see figure below), which is fast becoming its own movie genre. 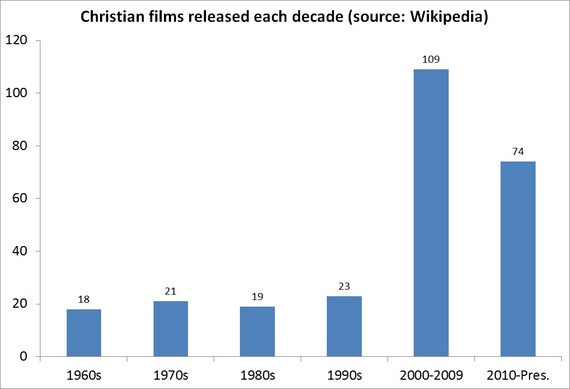 So what should you, the reader, expect moving forward? First, we will see more 'religious liberty' bills introduced, at least for the next several years. And yes, they need to be fought tooth and nail in order to protect those left vulnerable as a result. But these bills will continue to be met with strong opposition, both politically and economically, with boycotts of local businesses ensuing. Couple this with the continued proliferation of younger adults favoring a more secular society (even among many religious individuals), it will soon become a fool's errand for anyone to take the time to propose these laws.

As for the slew of Christian movies? They aren't going anywhere. Kevin Sorbo is just too handsome to keep off the big screen.