(Reuters) – Violence and discrimination against religious groups by governments and rival faiths have reached new highs in all regions of the world except the Americas, according to a new Pew Research Centre report.

Social hostility such as attacks on minority faiths or pressure to conform to certain norms was strong in one-third of the 198 countries and territories surveyed in 2012, especially in the Middle East and North Africa, it said on Tuesday. 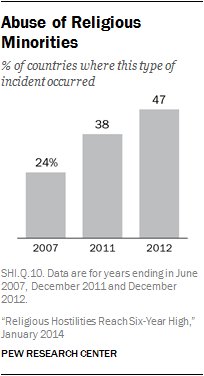 Religious-related terrorism and sectarian violence occurred in one-fifth of those countries in that year, while states imposed legal limits on worship, preaching or religious wear in almost 30 percent of them, Pew said.

“Religious hostilities increased in every major region of the world except the Americas,” Pew said in its report, the latest such survey in a series based on data back to 2007.

The Washington-based Centre, which is non-partisan and takes no policy position in its reports, gave no reason for the rises noted in hostility against Christians, Muslims, Jews and an “other” category including Sikhs, Bah’ais and atheists.

Hindus, Buddhists and folk religions saw lower levels of hostility and little change in the past six years, according to the report’s extensive data.

As some restrictive countries such as China, Indonesia, Russia and Egypt also have large populations, Pew estimated that 76 percent of the total global population faces some sort of official or informal restriction on their faith. 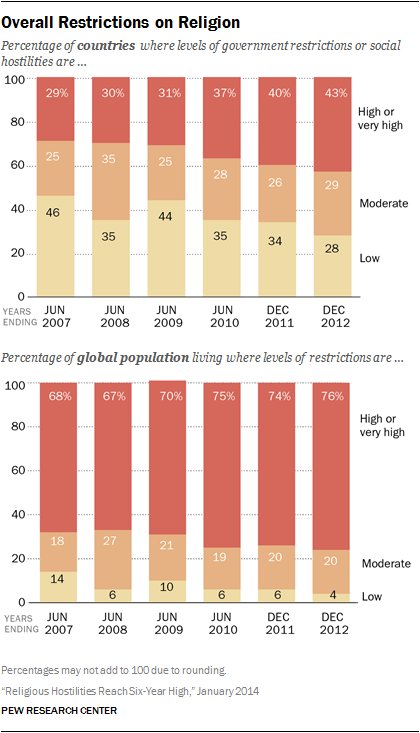 A report last week by the Christian group Open Doors said documented cases of Christians killed for their faith last year had doubled to 2,123 around the world, with Syria accounting for more than the entire global total in 2012.

Results for strong social hostility such as anti-Semitic attacks, Islamist assaults on churches and Buddhist agitation against Muslims were the highest seen since the series began, reaching 33 percent of surveyed countries in 2012 after 29 percent in 2011 and 20 percent in mid-2007.

Official bans, harassment or other government interference in religion rose to 29 percent of countries surveyed in 2012 after 28 percent in 2011 and 20 percent in mid-2007.

Europe showed the largest median increase in hostility due to a rise in harassment of women because of religious dress and violent attacks on minorities such as the murder of a rabbi and three Jewish children by an Islamist radical in France. 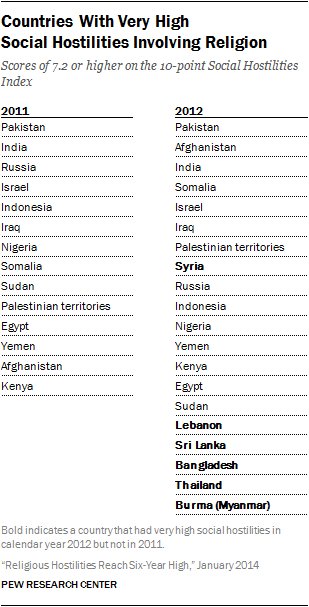 Tensions in Israel arise from the Palestinian issue, disagreements between secular and religious Jews and the growth of ultra-Orthodox sects that live apart from the majority.

The five countries with the most government restrictions on religion are Egypt, China, Iran, Saudi Arabia and Indonesia.

The world’s two largest faiths, Christianity and Islam, make up almost half the world’s population and were the most widely targeted in 2012, facing official and social hostility in 110 and 109 countries respectively. 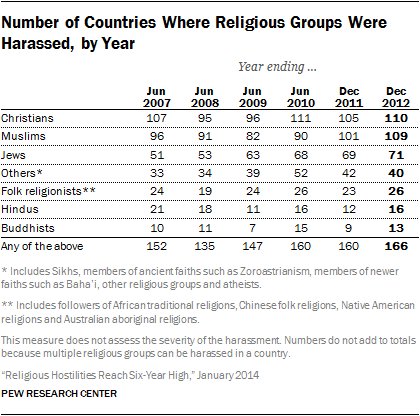 Jews suffer hostility in 71 countries, even though they make up only 0.2 percent of the world’s population and about 80 percent of them live in Israel and the United States.

The report said there were probably more restrictions on religion around the world than its statistics could document but its results could be considered “a good estimate”.

It classified war and terrorism as social hostility, arguing: “It is not always possible to determine the degree to which they are religiously motivated or state sponsored.”

North Korea, which last week’s Open Doors report described as the most dangerous country for Christians in the world, was absent from the Pew study due to a lack of data on its tightly closed society.