Scientists may be one step closer to revealing a hidden portrait behind a 380-year-old Rembrandt painting.

The masterpiece, "Old Man in Military Costume" by Dutch painter Rembrant Harmenszoon van Rijn, resides at the J. Paul Getty Museum in Los Angeles. Scientists had noticed the painting bears faint traces of another portrait beneath its surface. Researchers had previously probed the painting with infrared, neutron and conventional X-ray methods, but could not see the behind the top coat, largely because Rembrandt used the same paint (with the same chemical composition) for the underpainting and the final version.

New studies with more sophisticated X-ray techniques that can parse through the painting's layers give art historians hope that they may finally get to see who is depicted in the secret image.

"Our experiments demonstrate a possibility of how to reveal much of the hidden picture," Matthias Alfeld from the University of Antwerp said in a statement. "Compared to other techniques, the X-ray investigation we tested is currently the best method to look underneath the original painting."

These are X-ray fluorescence images of the Rembrandt mock-up. The panels represent fluorescence by the chemical elements calcium, iron, mercury and lead (from left to right).

Alfeld and an international team used macro X-ray fluorescence analysis to examine a mock-up of Rembrandt's original, created by museum intern Andrea Sartorius, who used paints with the same chemical composition as those used by the Dutch master. Sartorius painted one portrait on the canvas and then an imitation of "Old Man in Military Costume" on top. [In Photos: Looking for a Hidden Painting]

When bombarded with these high-energy X-rays, light is absorbed and emitted from different pigments in different ways. The scientists targeted four elements of the paint to fluoresce, including calcium, iron, mercury and lead, and got much better impressions of the hidden painting in the mock-up than they were able to before.

"The successful completion of these preliminary investigations on the mock-up painting was an important first step," Karen Trentelman, of the Getty Conservation Institute, said in a statement. "The results of these studies will enable us determine the best possible approach to employ in our planned upcoming study of the real Rembrandt painting." 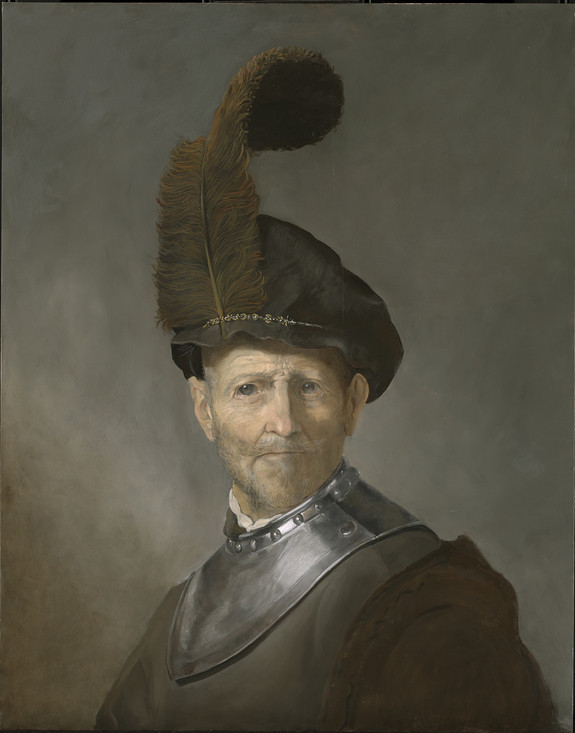 This isn't the first time scientists have delved into Rembrandt's paintings. Previous research revealed why his art possesses such calming beauty, finding the artist may have pioneered a technique that guides the viewer's gaze around a portrait, creating a special narrative and "calmer" viewing experience. Essentially, the researchers found Rembrandt painted more detail in and around the eyes of his subjects, tapping into an innate human attraction to the face.