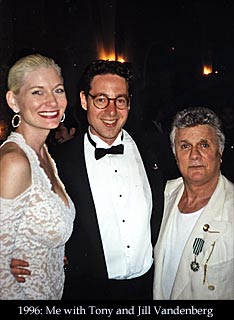 Reminiscent of Some Like it Hot, Tony Curtis was zooming along in a little dinghy to meet me at the dock. It was 1996, during the Cannes Film Festival, and he was staying on Dodi Fayed's yacht. Good thing I brought security because the minute he got off the boat, people began crowding around us. Tony was walking tall, proudly wearing his French Legion of Honor medal, as we headed to a book signing for his autobiography. Before I could blink, hundreds of people were escorting us to the bookshop, and when we reached the street with the bookshop, thousands of people were there waiting, cheering. I've never seen anything like it. After signing so much his fingers were aching, we hopped in an escape vehicle, but not before fans started jumping on the hood, pounding the windows and throwing themselves on the trunk. Tony laughed and laughed, loving every minute. He turned to me and said, "You gotta tell Jill, you gotta tell Jill." Jill was his girlfriend who later became his wife.

Tony loved being famous. Once we were driving in L.A. and he wanted to show me something, so we hopped on the 101 freeway and soon he pointed with excitement and said, "Okay, get in the right lane, slow down, slow down. There! There it is!" He was pointing to a gigantic, fantastic mural of Tony Curtis circa 1953. He slapped his leg and laughed with total glee. In the 1950s, Tony was so famous and popular that he could make any movie he wanted. He decided to make a movie with his idol, Cary Grant, on a pink submarine. Not only was he charming and good looking with great screen presence but he could also act. Just rent The Sweet Smell of Success and The Defiant Ones (for which he was nominated for an Academy Award).

I was lucky enough to have produced a movie with Tony Curtis and another with Jack Lemmon. The only Hot star missing from my filmography is Marilyn Monroe, but she died before I was born. Tony would often relay the story of a costume designer on Some Like it Hot telling him that he had a better ass than Marilyn Monroe's.

Tony loved life and lived it to its fullest. But there was another side to Tony: He was also a fragile, wounded human. He once told me the story of his brother dying when he was a kid and how his mother blamed him, as well as how she used to beat him. He told me that when his son died from a drug overdose, Billy Wilder told Tony that it was his fault for setting a bad example. Tony never stopped thinking about his son. He would make diorama boxes that were filled with everyday objects that were somehow connected. There is something beautiful about these pieces of art as they conjure up images of his childhood and images of him trying to understand his own existence. Simple, thoughtful, fragile, beautiful and artistic: All aspects of a man who at one point was the biggest star in the world.