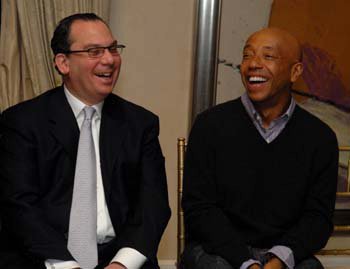 On Jan. 7, exactly two weeks before we are to simultaneously celebrate the life of Dr. Martin Luther King Jr. and inaugurate Barack Obama to his second term as President of the United States, sinister advertisements went up in dozens of subway stations around New York City, making evident that despite the undoubted strides our nation has made toward achieving justice and equality, bigotry and fear-mongering remain alive and well in America.

The American Freedom Defense Initiative, headed by Pamela Geller, an inflammatory demagogue with a long history of anti-Muslim incitement, purchased space in 39 stations for ads with an image of the burning World Trade Center and a quote attributed to the Quran saying, "Soon shall we cast terror into the hearts of the unbelievers." The Metropolitan Transportation Authority, which administers New York's transit system, said the ads will run for a month.

This new ad campaign is Round Two of Geller's pernicious campaign to whip up hatred of American Muslims by placing ads in transit systems around the nation. Last September, Geller's group paid for ads in subway stations and on buses in New York, San Francisco, Washington D.C., Chicago and Denver, which read: "In any war between the civilized man and the savage, support the civilized man. Support Israel. Defeat Jihad." Those ads not only falsely conflated belief in Islam with enmity to Israel, but also implied that adherents of Islam are savages.

The Quranic verse (3:151) which Geller cites in her new ad campaign refers to a moment in early Muslim history in which a large army of idol worshippers from Mecca stood poised to invade Medina in an attempt to wipe out a small community of Muslims living under the leadership of the Prophet Muhammad. If the passage sounds harsh to modern ears, let us not forget that the Torah contains numerous commands by God to the Children of Israel to indiscriminately slay unbelievers and members of enemy tribes.

More than 1,000 years later, Jewish sages of the Talmudic period provided interpretation and context to such quotes; making clear that they are not meant to be interpreted literally or to hold true for eternity. A similar oral tradition, mitigating harsh passages in the Quran, took place in Islam in the centuries following the life of the Prophet Muhammad. Just as no one but an unabashed anti-Semite would suggest that Judaism is a bloodthirsty religion because of biblical passages commanding the Children to Israel to kill their enemies, no one but an anti-Muslim bigot would cite a Quranic verse out of context to smear modern-day Muslims.

It goes without saying that the latest ads in New York subway stations are antithetical to the message of Dr. King, who denounced bigotry against people of all backgrounds. He repeatedly condemned anti-Semitism and would no doubt have denounced the present-day campaign against American Muslims.

We believe too that Dr. King would have been critical of recent court rulings affirming that anti-Muslim ads must be allowed because of First Amendment protections. Freedom of speech is one thing, but demonization of a particular religious, racial or ethnic community is quite another. We doubt that a judge would rule -- or the MTA would accept -- that it is OK to put up billboards referring to Jews, African-Americans or gay people as savages; or asserting that Judaism or Christianity seek to strike terror into the hearts of unbelievers. Yet somehow free speech trumps the right of American Muslims; members of a small and relatively defenseless community, to use transit systems in cities across America without being confronted by placards that drag their religion through the mud.

Yes, as the horrors of 9/11 made vividly clear, there is an extremist cohort that twists the doctrines of Islam to justify terrorism, and we must be vigilant in fighting this group. Yet, as we have learned firsthand through the work we have undertaken at The Foundation for Ethnic Understanding to build ties of understanding and trust between Jews and Muslims, the vast majority of American Muslims are decent, loyal and law-abiding citizens who abhor terrorism and violence. Like their Jewish and Christian counterparts, they want only to practice their faith freely while simultaneously being proud and productive Americans who contribute to the well-being of the larger society.

Tragically, Muslim-baiting of the kind in which Geller and other Islamophobes engage has devastating real-world consequences for American Muslims. In recent years, there have been a growing number of violent -- and sometimes murderous -- hate crimes directed at innocent Muslims and others mistakenly believed to be Muslims. Mosques have been vandalized and even firebombed.

If we as a society wish to honor the legacy of Dr. Martin Luther King, Jr. and to uphold the hope for a more just and inclusive America implicit in the second inauguration of Barack Obama, we must say a collective "no" to the shameful campaign to stigmatize and scapegoat our fellow Americans of the Muslim faith. By taking that stand, we re-affirm the credo of our nation's founders -- that all Americans, regardless of background, are equal and are worthy of being treated with respect.

Rabbi Marc Schneier and Russell Simmons are President and Chairman of The Foundation for Ethnic Understanding, a New York-based not for profit dedicated to strengthening ties of communication and cooperation between diverse racial and religious communities.