From the date of publication in Paris of his breakout novel Tropic of Cancer, the American author Henry Miller faced a career long struggle against the censorship and suppression of his most important works. Although he enjoyed a brief period of celebrity and notoriety in the 1960s and 1970s after his banned books were finally published in the US, today, more than thirty years after his death, he remains a marginalized and largely forgotten American writer. This despite the fact that Miller was one of the twentieth century's most prolific and provocative authors whose writing and literary example influenced many well-known writers who followed him, including Jack Kerouac, Lawrence Ferlinghetti, Norman Mailer, Phillip Roth, Cormac McCarthy, Paul Theroux, and Erica Jong, not to mention such pop culture icons as Bob Dylan and the Beatles.

Miller's battle with censorship began as soon as Tropic of Cancer was issued by Obelisk Press in 1934. The book jacket was wrapped with a warning that read, "NOT TO BE IMPORTED INTO THE UNITED STATES OR GREAT BRITAIN." Even in freethinking Paris, bookstores sold the novel under the counter. As word spread, copies were gobbled up by American tourists and smuggled into the United States disguised under dust jackets from other books. Miller mailed copies of the book to prominent American literary figures hoping for reviews and word of mouth that would announce his arrival as an author. (Tropic of Cancer was Miller's first published book, although he had been writing steadily for more than ten years.)

One of the copies of the book that Miller sent to an American friend was intercepted by a Customs official and ended up on the desk of Huntington Cairns, a young Baltimore attorney who served as a legal advisor to the US Treasury Department. Cairns, a literate man who counted among his friends H.L. Mencken, the sage of Baltimore, read the book and, with some reluctance, banned it. Cairns recognized the literary merit of Tropic of Cancer, but was certain that under prevailing standards of decency, it could not be admitted. Tropic of Cancer was obscene because it brought into public view subjects and language that society wished to keep hidden.

Cairns discussed the Miller dilemma with Mencken, who wrote to Miller about Cairns' admiration for the book and the legal reasoning behind its censorship. Miller then wrote to Cairns expressing his understanding of the predicament that Cairns faced. A thirty-year friendship was sparked. Cairns advised Miller that in order to overcome the ban, he must build a reputation in America as an author of recognized literary merit, such as James Joyce and D.H. Lawrence enjoyed. Ulysses had been admitted, and Lady Chatterley's Lover would follow. Cairns offered to help Miller establish that reputation, and set about enlisting respected American critics like Edmund Wilson (who had written a favorable review of Cancer) in Miller's cause. But although Miller's reputation as a literary artist grew with the publication in America of less controversial works such as The Colossus of Maroussi and The Air-Conditioned Nightmare, Cairns never became confident that Miller could pass the smell test of literary respectability in American courts, and so he placed all of Miller's major autobiographical novels ⎯ Black Spring, Tropic of Capricorn, Sexus, Plexus, and Nexus ⎯ on the list of banned books. All of these titles ⎯ covering the years 1936 to 1959, Miller's most productive period ⎯ were originally published in France, in English.

Miller's banned books were not published in the United States until 1961. By then he was seventy years old and pretty much written out. The literary uproar lasted three years, put Miller's books on bestseller lists, brought him fame and, for the first time in his life, financial security. But though the US Supreme Court ruled in June 1964 that Miller's banned books were not obscene, Miller drew no satisfaction from this finding because he knew that American readers were consuming his books for their sensationalistic elements and missing the liberating message of deliverance from hypocrisy and shame that lay behind them. In a 1972 interview with Digby Diehl published in the Los Angeles Times Miller confessed, "More and more I've grown disgusted with my readers. I revealed everything about myself, and I find that they're interested in this sensational life. But I was trying to give them more than that." What he was trying to give us through his writing and his example was the path to individual freedom ⎯ spiritual freedom, not political freedom ⎯ a path that must be followed into the dark depths of the soul if one is to ascend to the realm of the angels.

Miller's star burned brightly and briefly in America, then burned out. Norman Mailer and Erica Jong attempted to revive his reputation and defend him against misperceptions of his literary mission and accomplishments, but he has been denied his rightful place in the American pantheon. He has been excluded from anthologies of twentieth century American literature, even though there are numerous examples of his more chaste writing ⎯ "The Tailor Shop" and "Reunion in Brooklyn" spring immediately to mind ⎯ that display his literary gifts without the slightest possibility of offense. Yet lesser writers, such as Kerouac, are anthologized. As a consequence, young readers are not exposed to Miller in their high school or college English literature courses. They are left to find him on their own.

Why read Miller now? His voice is as fresh and personal as when he wrote his first letter to a Brooklyn friend. You will feel as you read Miller that you are in company with a man who has acquired wisdom through suffering, that he is sharing his experience with you out of love. You will know you are in the presence of a spirit who was willing to embrace life at both its darkest and brightest extremes. His message of self-realization as the goal of life is timeless.

Arthur Hoyle is the author of The Unknown Henry Miller: A Seeker in Big Sur
. 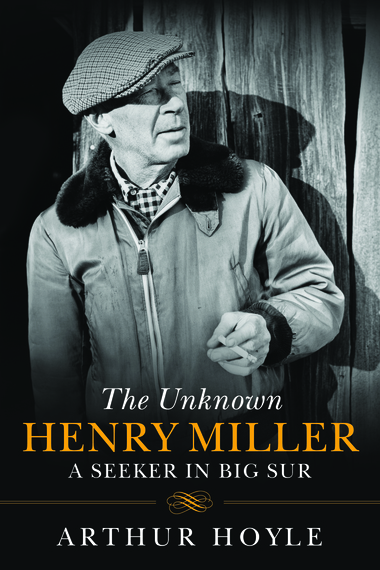