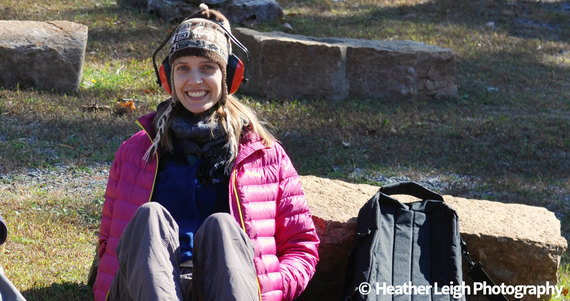 The skeet whooshed towards the heavens. My right eye stared ahead with the barrel flush. I had developed a rhythm with the saucer: After it launched I waited until it reached a precise point in my field of vision and then I pulled the trigger. Without patience, my aim would be low and the saucer would continue its original trajectory until it fell to the ground. So I waited and then, click, the target erupted, its orange pieces blending with the sky like a perfect match on the color wheel.

I hit 11 of 25 skeets. My friend Rachel, who I'm sure shot guns growing up based on my generalization of people from Arkansas and who say things like, "My drinking water had tadpoles," only shot two. She hit her first, missed the next 23, and ended with a bang. Rachel sat against a rock and watched others in our group shoot. She smiled and now said things like, "I have not spent time outside in days. It is beautiful."

There was not a cloud above us and Rachel, a Fulbright scholar, began telling me a story about the sky. If people had never been told the sky was blue then they may see it as white, another color, or simply a void. Those people may have as much trouble wrapping their heads around the blue sky as I have around not seeing it as blue.

I can't see Rachel in a different light, either. When I met her 2.5 years ago I saw a radiant and beautiful 27-year-old whose attitude matched her use of exclamation points. She told me stories back then, too, like the meaning of interrobang, which is a combination of an exclamation point and a question mark, and how she was diagnosed at 26 with stage 3 colon cancer that would later spread to her ovaries and omentum, "upgrading" the cancer to stage 4. Rachel would stay on treatment forever, in a concept that is new to me and the way I had "finished" cancer treatment when I was a teen: Rachel was living with cancer.

I may never have met Rachel if her life trajectory had not been erupted by cancer. Even though we had many similarities and both lived in Washington, D.C., we met as part of a group of cancer survivors to rock climb on the red rocks of Moab, Utah, our trip funded by a nonprofit that believes providing outdoor adventures changes survivors' lives.

I have always been strong and lean as if I was meant to climb rock walls in that desert that looked like Mars. Still, Rachel was better at climbing. She possessed grace and strength that was less obvious than mine. Rachel was actually better than me at most things I was passionate about, including writing, shedding body fat, researching nutrition and drinking whiskey, which I realized when we toasted her 29th birthday with her dad's homemade moonshine.

When her cancer returned, Rachel underwent surgery to remove ovaries and parts of her colon. Controversial surgery to slice her open and pour hot chemotherapy into cavity, a procedure known as shake and bake. More surgery to remove more tumor and peek inside at the cancer that had spread everywhere and could not be removed due to its placement near her organs. So much treatment and so many procedures over so many years that I could not keep track of Rachel's status without feeling like I was burdening her.

When Rachel shared episodes from her life there was always a funny story, because if her level of suffering couldn't break her then nothing could. When she had to cancel climbing with me she said, "This kid with a provisional driver's license just ran into me. I'm fine, car is fine -- just a fender bender, luckily. And the guy was a super nice kid!"

And, "I'm supposed to be in the hospital right now but they don't have a bed for me yet. I guess Georgetown was just really busy today! I just have some sort of bug, could be a result of the trip to Zambia. Who knows."

And while she was still hospitalized the day before her thirtieth birthday party she said, "I have a lot of potential arguing to do in the morning to get them to let me out of here for a few hours. I'll call you if we need to execute 'plan prison break!'"

I am fortunate to have completed my 20s without cancer, following an adolescence smothered by it. I spent my college years questioning how to live more than actually living: When would I share with friends and romantic interests that I had had cancer? How long could I lie about my limp that was caused by my resected cancerous ilium? Could I ever do it again if I had to -- endure cancer and its treatments with the same unwavering spirit and superhuman conviction?

Now eight years after college I wonder if I could I ever do what Rachel did -- live with cancer without any possibility of a cure, all while never letting up on exclamation points?

Sitting straight up, on the ground with her back supported by the rock, under the clear blue sky, Rachel was at peace. She hadn't eaten in a month and days before, the procedure to insert a feeding tube nearly failed catastrophically when her doctor at first couldn't get the tube past the tumor that was blocking the entrance into her stomach. "That was almost it," she said.

I have seen many young people pass away due to cancer. When death is inevitable, the end can come quickly. Rachel was different, living nine more months without food or drink; never surrendering to disease; never surrendering her loving and positive spirit. "I just want to live and have more adventures," she said, still smiling at the heavens.

Rachel Yingling erupted into my life and so many others' lives. She is the blue sky: Her impact on those who knew her was so great that none of us can imagine what life would be like if we had not met her.

I write and I love jellybeans, cancerslayerblog.com