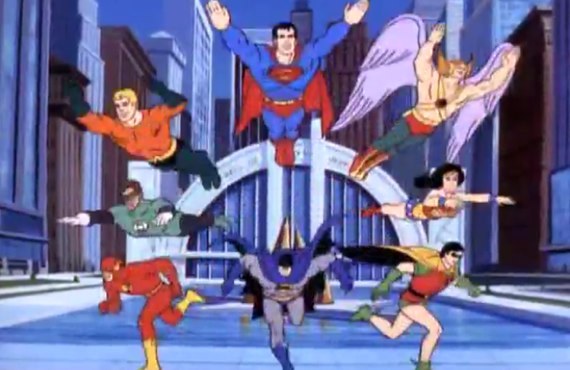 "Remember This?" is a recurring feature on HuffPost Entertainment, resurrecting pop-cultural artifacts that haven't enjoyed the spotlight for quite some time. Today, in honor of The Dark Knight Rises, Mike Ryan writes about his favorite incarnation of the Super Friends, Challenge of the Super Friends. If there's a topic you want us to cover, let us know in the comments.

Even as a child, I hated the Super Friends. First of all, that title: It just sounds so corny. Which is disappointing because the comic book equivalent, Justice League of America, sounded so cool. Another problem was that the heroes Super Friends focused on -- Superman, Batman, Robin, Wonder Woman and Aquaman -- were, well, lame. (No, these characters are not lame in the comics, obviously, but they were lame as portrayed in Super Friends. Remember, this was long before Christopher Nolan and Tim Burton cracked the code on Batman or Vinnie Chase set box-office records as Aquaman.) But, briefly, for 16 episodes, there was a shining jewel in this sludge of animated discourse: Challenge of the Super Friends.

The main problem with the Super Friends was that the creators felt some strange need to include wacky offshoot characters: Two non-super powered teenagers, Wendy and Marvin (plus their dog), in earlier versions; The Wonder Twins (plus their monkey) in later versions. I was too young to watch the earlier episodes (including Challenge) in the original run (the first Super Friends series aired in 1973), but they were played on an endless loop in syndication during the early '80s. Challenge of the Super Friends originally aired in the fall of 1978, immediately following an episode with the format that featured The Wonder Twins. Every day, when I would tune in, I was just hoping that the syndication gods decided, on that day, to air Challenge of the Super Friends. Here's why.

My favorite DC superheroes are The Flash and Green Lantern. Unfortunately, The Flash and Green Lantern were not friendly enough with the (smug) core group. I suppose they are all friends, just not super friends. (Yes, I know that both of them appeared as cameos a couple of times. Not good enough.) The 16 Challenge of the Super Friends episodes were the closest thing we got to an animated Justice League of America cartoon in that era. I mean, the Justice League of America is even mentioned in the opening credits! Why don't we watch those opening credits, because they are awesome. Behold:

I mean, c'mon, how can you not get excited listening to that theme swell as they all march in unison? The first Super Friend we even see here is Green Lantern. It's not just the Justice League: Captain Cold, The Flash's archenemy, is even in the opening credits. (Speaking of the theme song: It doesn't hurt that it sounds a lot like the one from my favorite animated television show from that era, Battle of the Planets.)

It wasn't just the inclusion of The Flash and Green Lantern, it was that the episodes didn't focus on five superheroes. Seriously, what genius decided that Aquaman is one of the five most interesting characters? "You know, kids just love fish," someone who I still hate to this day said. The full lineup beyond the core five included: The Flash, Green Lantern, Hawkman, Black Vulcan (who is basically Black Lightning, who couldn't be used for legal reasons), Apache Chief and Samurai. OK, yeah, that could have been better. But, compared to Wendy and Marvin (and their dog), it was night and day. There were no wacky offshoot characters.

The Legion of Doom was commanded by Lex Luthor, which I always thought was odd, considering that Luthor had no real powers of his own. Why would someone as powerful as Sinestro put up with that? I digress. Regardless, here's Luthor introducing each member of the Legion of Doom one by one. The best thing about this is that as each member is introduced, he or she each feels compelled to do something "evil." My favorite: The Riddler pulling out a deck of playing cards that feature the faces of Superman, Batman, Robin, Wonder Woman and The Wonder Twins (and their monkey) -- which he then sets on fire. Two things about this: (A) this was the only appearance of The Wonder Twins and Gleek during the 16 episode run of Challenge and (B) apparently The Riddler and my 8-year-old self had a lot in common in our opinions toward that particular group of Super Friends.

Sadly, it wouldn't last. The next incarnation of Super Friends, The World's Greatest Super Friends was a lie. It was not the world's greatest Super Friends at all -- plus The Wonder Twins and Gleek were back, too. In fact, what a smug title -- a title that must have been really hurtful to The Flash, Green Lantern and Hawkman. "Why is Aquaman the world's greatest Super Friend and I'm not?" I feel your pain, Hawkman. (In 1984, things got better with The Legendary Super Powers Show, but it wasn't the same. Green Lantern was back and Firestorm was included, but The Flash wasn't present and of course The Wonder Twins just had to be included. "Oh, we just couldn't produce a show about superheroes without The Wonder Twins!," said someone who I still hate to this day.)

So, when you're watching The Dark Knight Rises this weekend, just remember how far we've all come. We live in a world with three excellent Batman movies and an excellent Avengers movie. And, the best thing: None of them involve a Wonder Twin.

Mike Ryan is senior entertainment writer for The Huffington Post. He prefers The Wonder Twins to Wendy and Marvin. You can contact Mike Ryan directly on Twitter.