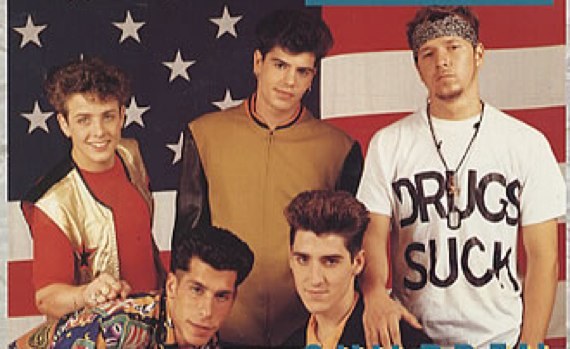 "Remember This?" is a recurring feature on HuffPost Entertainment, resurrecting pop-cultural artifacts that haven't enjoyed the spotlight for quite some time. Today, Mike Ryan writes about "Tonight" by New Kids on the Block. If there's a topic you want us to cover, let us know in the comments.

I never hated the New Kids on the Block as much as I was supposed to. I remember that the Top-40 radio station in Kansas City refused to play New Kids in an effort to appear hip. (As if snubbing the New Kids in favor of the still playing the musical stylings of Timmy T would accomplish such a thing.) The point is, even radio stations found it better for business to hate the New Kids than to embrace them. And even though I had no real opinion on the New Kids one way or another, it behooved me, as a high-school freshman, to openly hate the New Kids because it was cool to hate New Kids on the Block. And I wanted to be cool because, well, I was not cool. (I am still not cool.) I finally formed an actual opinion of the Boston-grown boy band the first time I heard "Tonight."

I never admitted this at the time, but I did harbor an irrational hatred toward Jonathan Knight because I was fairly convinced that my girlfriend at the time -- a die-hard New Kids fan -- had stronger feelings for him than she did for me. Looking back, (A) I was right and (B) I didn't have much to worry about. All of this presented a quandary, though, because I now had to choose between my fruitless quest to be cool and my not-quite-as-fruitless yearning for make-out sessions.

It's probably safe to assume that I am in the one percentile of "first human beings who have heard New Kids on the Block's Step by Step album from start to finish." As Heather (my girlfriend's name was Heather, by the way) did her best to articulate why the first song on the album -- the title track, "Step by Step" -- was "good," my thoughts proceeded roughly like this: I think by song four I can safely attempt to start the make-out session without ... hey, you know, this is kind of catchy. This was immediately followed by the realization that no one, ever, could know that I had these thoughts. By song two, "This is kind of catchy" had blossomed into "This song is great!" That song was "Tonight."

Look, "Tonight," artistically, is by no means a good song. (And I will add that I don't know enough about music to make that assertion with 100-percent confidence. Still, I'm pretty confident about this.) But, boy, is it ever catchy. So catchy that I had to own it for myself.

(As an aside: Shortly after the Step by Step album was released, a friend of mine attempted to convince a girl that he was Danny Wood from the New Kids by singing the line from "Step By Step," "We can have lots of fun." This is remarkable because not only was he successful in this attempt, but the girl he convinced just wanted to meet Jordan.)

Now, remember, this was 1990. So there was no Internet from which to secretly download your favorite guilty pleasure. (Today, no one ever has to know how many songs I own from Roxette's "Joyride" album.) So, here's the little deal that I made with myself: I certainly couldn't purchase the entire Step By Step album, thereby consigning myself to the shameful category of "people who bought a New Kids on the Block album." Instead, I reasoned with myself that it was perfectly fine to purchase the single.

There was an independent record store in the suburb of Kansas City that I lived in at the time called 7th Heaven. (7th Heaven sold not just music, but also a wide array of sinister models that I later found out were used for smoking marijuana.) But when I got there, I realized that I couldn't do it. I couldn't walk up to the register and say, "One copy of the New Kids single, please." I searched the store for some other tapes (tapes!) to dilute the impact of my selection. When I checked out, I had purchased one copy each of Warrant's Dirty Rotten Filthy Stinking Rich, 2 Live Crew's As Nasty as They Wanna Be, Skid Row's Skid Row and the single for New Kids on the Block's "Tonight." It was as if I were purchasing a couple tubes of toothpaste, deodorant and some hardcore bestiality porn.

As I get older and wiser and far less concerned about how I was perceived in high school (none of this is true: I will always be concerned about this), I have found that I'm not the only one who loved "Tonight." I'm not the only one, now, who can admit to himself that, yes, there are more than a few New Kids on the Block songs - "Tonight," "The Right Stuff," "Cover Girl," "Step By Step" -- that are worth a listen. There are more than a few that, now that the years have erased the stigma, can be enjoyed without guilt, perhaps even by me on the subway ride into the office this morning. (At a very low volume level, of course, just in case someone can overhear -- OK, maybe there's still a slight stigma.)