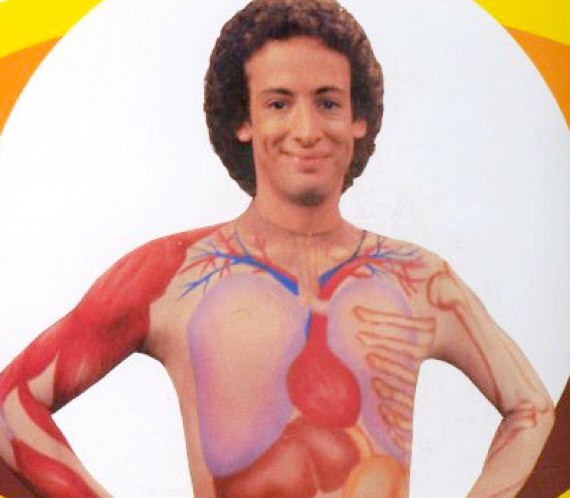 "Remember This?" is a recurring feature on HuffPost Entertainment, resurrecting pop-cultural artifacts that haven't enjoyed the spotlight for quite some time. Today, Mike Ryan, begrudgingly, writes about Slim Goodbody. If there's a topic you want us to cover, let us know in the comments.

"But," I responded, "I'm on vacation! You promised me I'd have some time off before Comic Con!"

"Oh, just pick something," I was told. "Just pick anything. It's Fourth of July, no one is reading anyway."

After, there was only silence.

Slim Goodbody was the first superhero that I cared about. This is only interesting after I explain the dynamics of why. (And the term "superhero" might be a stretch.) But, first, what is a Slim Goodbody?

Slim Goodbody was man who dressed in a skintight suit that displayed the organs of the male anatomy. This is a lot less interesting than it sounds. The entire point of Slim Goodbody (his real name was and still is John Burstein) was to promote healthy eating. This is a good message, but it's inherently boring. At least for me, however, there was one remarkable aspect about Slim Goodbody.

Slim Goodbody had an alter ego. I have no idea if this alter ego had a secret identity or a separate name, but, when this man wasn't displaying his organs to the world, he was wearing a red track suit. I became fascinated with the man in the red track suit. 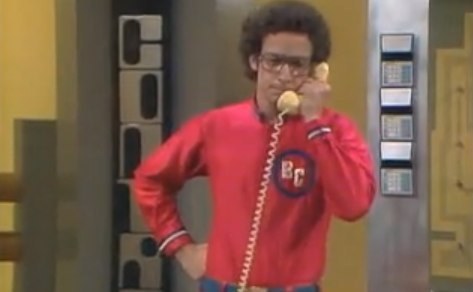 As we discussed last week, The Electric Company was my first introduction to Spider-Man, but that version of Spider-Man did not have the alter ego of Peter Parker. Slim Goodbody, of all things, introduced me to the alter ego. It was at this point that I discovered that I was much more interested in the hero's day-to-day life than I was in the hero being a hero. In other words: I wanted to know what made this guy tick.

Look, I get it: Being healthy made Slim Goodbody tick. But, strangely enough, Slim Goodbody of all people (I cannot believe I'm writing this -- I'm supposed to be on vacation) led me to the lives of Peter Parker, Bruce Wayne, Tony Stark and Barry Allen. (Yes, I was a huge fan of The Flash.) I mean, anyone can write a comic book about a person in a costume fighting another person in a costume. But, not everyone could make me care about a normal human being who, at times, would dress up in a costume and fight other people in a costume.

The only reason superheroes are interesting is because of who they are when they're not superheroes.

I know, this piece was supposed to be about Slim Goodbody. How Slim Goodbody was shown in my second grade class and taught me that I should eat apples. I mean, I should, but I don't. I eat a lot of pizza and Coke Zero. The lasting effect that Slim Goodbody had on me was that, when this man wasn't Slim Goodbody, he was just a normal guy in a red track suit. A normal guy who, just like you and me, could aspire to greatness. Perhaps that greatness is as Slim Goodbody. Perhaps that greatness is as a high school student who inherited powers from a radioactive spider. Or a wealthy playboy who invented an armored suit. Or a person who became the fastest man alive, only to be killed off during Crises on Infinite Earths -- then brought back to life because comic books can be stupid.

Regardless, Slim Goodbody, of all things, was the first entity who taught me that a normal person could do anything that he wanted to do -- even if that person's dream job is to write about Slim Goodbody, 30 years after the fact, on his day off.

Mike Ryan is senior entertainment writer for The Huffington Post. He still isn't happy that The Flash was killed off during Crises on Infinite Earths. You can contact Mike Ryan directly on Twitter.