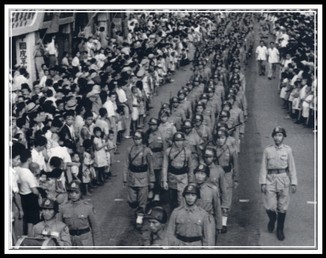 In 1949, the ROC imposed martial law in Taiwan.

"We had a dream of going back to the Mainland; we did not want to accept defeat. We never thought that we would not be able to go back. We wanted to go back to our hometowns, to see our families... but there was nothing left." -- Mr. Chiang Sanda, who arrived in Taiwan in 1949.

Mr. Chiang Sanda was only 18 years old when he lost his entire family in the Chinese Civil War. Originally from Jiangsu province, he moved to Shanghai to enroll with the Kuomintang (KMT) forces but had to leave again in May 1949. "I was the only one to come to Taiwan," he says, explaining that fleeing to Taiwan was his only option to survive after the KMT's defeat against the Chinese Communist Party (CCP).

"Most of us fled to Taiwan because we felt hatred and resentment (yuanhen) for the Chinese Communist Party," Mr. Chiang adds. In fact, the CCP's victory in Mainland China forced over 2 million immigrants to leave the Mainland for Taiwan between 1945 and 1949, representing about a third of the 6 million people living on the island at that time. Mostly soldiers, intellectual and business elites associated with the KMT, they escaped from a country torn by the Civil War between the CCP's Communists and the KMT's Nationalists, leaving behind their homes and oftentimes their families.

In 1949, Taiwan was nothing like the developed island that it is today. Mr. Chiang explains, "Not many people could speak Mandarin, as their mother tongue had been Taiwanese or Japanese" after the Japanese occupation. This led to confusion and misunderstanding between the newly arrived immigrants and the local population, such as Ms. Li Shuhua, who was born in Taiwan in 1931, under Japanese rule. 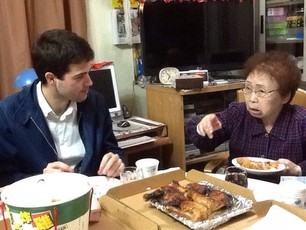 Writer Christian Rhally interviews Ms. Li Shuhua, who was born in Taiwan in 1931.

"When the Japanese army left in 1945, we did not know what was going to happen to Taiwan," Ms. Li explains. It was a disorganized KMT army that arrived in Taiwan in 1945. Not only were Taiwanese people very poor at that time, but violence and rape were also common between KMT soldiers and Taiwanese women. Ms. Wang Li, who was born in a family of farmers in Tamsui, Taiwan, was 9 years old in 1949. She remembers, "As soon as we saw people from the KMT, we would avoid them. We were afraid of what they would do to us."

In December 1949, Chiang Kai-shek relocated the capital of the Republic of China (ROC) to Taipei, Taiwan, and began to establish a more stable KMT government. The soldiers' behavior improved since they did not dare to contradict the rule of the KMT, and, slowly, the local population got used to the population coming from the Mainland. "More and more local people started to speak Mandarin through study or marriage," says Mr. Chiang. After a period of political chaos, Taiwan was ready to go through several reforms. 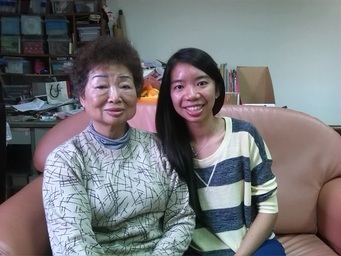 Ms. Wang Li and her granddaughter Vivian in Tamsui.

One of the most important reforms of the time took place in the 1950s, a few years after the KMT's arrival in Taiwan. In 1953, then ROC Premier Chen Cheng carried out the policy geng zhe you qi tian or "Land to the tiller," a policy to privatize the land and transfer it back to farmers. Used as a strategy to keep Communists off the island, this reform had a large impact on families such as Ms. Wang's, allowing them to own the land that they tilled. Overall, "Land to the tiller" affected over 139,000 hectares of arable land and 190,000 households. Furthermore, the per acre yield of rice paddies in Taiwan increased by about 50 percent from 1949 to 1960, tripling farmers' income and leading 80 percent of them to become land owners.

As the arrival of Chiang Kai-shek largely changed the fate of the people in Taiwan, Mr. Chiang remained in the KMT military for two more years after landing in 1949. For him and thousands of other soldiers, arriving in Taiwan was the beginning of a long wait to go back to the Mainland. "We had this dream of going back to the Mainland, so for the first two or three years, we were not making any long-term plans here," he explains. However, their dream faded away as the CCP consolidated on the Mainland. "It became impossible [to go back]. So after a few years, we changed our plans." Indeed, these soldiers slowly started to get married and to establish themselves on the island. 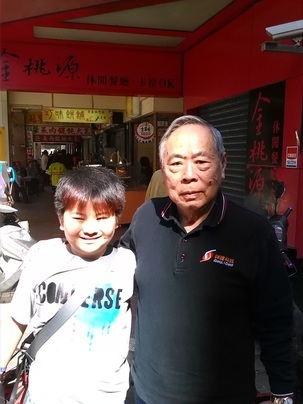 Mr. Chiang Sanda with his grandson Evan in Taipei.

After taking a job in government, Mr. Chiang married a Taiwanese woman in 1955, and together they raised a family in Taiwan. "I had lost my parents and my siblings, but the [family of my wife] accepted me," he adds. Having found a new life in Taiwan, Mr. Chiang has accepted the reality that he, just like thousands of other immigrants, will not go back to the Mainland. He explains, "We cannot go back to the Mainland, and now we don't have anything left there." Finally, he declares that Taiwan has become his true home, after being a temporary shelter during the war. "Our lives and families live here. Taiwan is our home now."

Christian Rhally is a junior at Yale College studying economics. Contact him at christian.rhally@yale.edu