In Paul Yoon's new novel Snow Hunters (2013), Yohan, the son of a poor farmer in North Korea, is captured during the Korean War and sent to an unnamed POW camp on the southern coast where he tends to patients in a field hospital. After the armistice, Yohan decides not to repatriate back to North Korea, but rather goes to Brazil where he becomes an apprentice to a Japanese tailor. In addressing the issue of repatriation, Yoon's work joins Choi In-hun's The Square (1960; newly translated by Kim Seong-kon) and Ha Jin's War Trash (2004), Korean War novels in which protagonists struggle with the question of what to do after the ceasefire.

As we move into the new year, an important though virtually unknown date commemorating the start of a war within the Korean War will pass. On January 2, 1952, the United States delivered a proposal for the voluntary repatriation of prisoners of war to the negotiators at Panmunjom. Communists opposed the proposal because it violated the 1949 Geneva Convention, a document signed by the United States, which called for the automatic repatriation of POWs. This proposal dragged out negotiations for an additional fifteen months during which time tens of thousands of soldiers perished as both sides engaged brutal trench warfare while U.S. warplanes carpet bombed North Korea. A lot of blood came attached to the American proposal.

In Captive Minds: Race, War, and the Education of Korean POWs, Grace June Chae reveals that:

This was an exceptional moment when POWs were no longer merely sources of enemy intelligence but an integral part of psychological warfare against the communist threat . . . The controversy over the American proposal for voluntary repatriation and the screening of repatriates from non-repatriates within the camps fueled tensions amongst the prisoners, as well as between negotiators at Panmunjom. It was a new moment of how the rights of foreign prisoners of war were to be negotiated during wartime, when the principles of human rights were just beginning to gain currency in a post-colonial world. (Dissertation, Department of History, University of Chicago, 2010: 4-5) 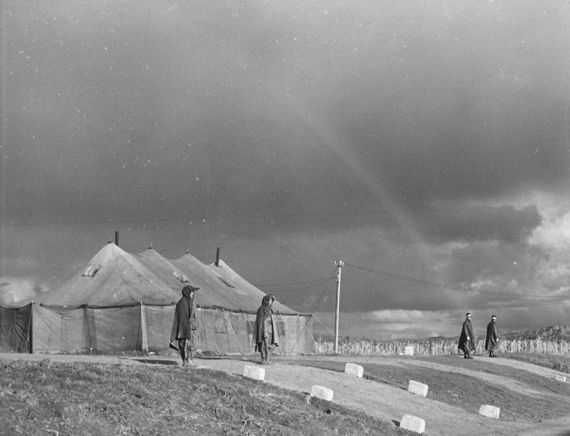 In The Square, Myong-jun is an angst-ridden, sexually frustrated, and mildly misogynist philosophy student, in other words a typical philosophy student, who crosses the border into North Korea to find his father who defected from the south after liberation from Japan. During the war Myong-jun is captured and sent to the POW camp at Geoje (Koje) Island. Rather than be repatriated, Myong-jun decides to go to India where he plans to invent an ordinary life for himself as a theater-ticket seller in Calcutta. Yet as the ship carrying former soldiers moves through the East China Sea toward Hong Kong, tensions surface and Myong-jun begins to question his decision.

Ha Jin's fictional memoir War Trash documents the intensification of conflicts between warring groups of prisoners over the issue of repatriation as the Chinese protagonist Yu Yuan is beaten, tortured and almost killed. The process of screening prisoners by representatives of the Nationalists in Taiwan and Communists in China is verbally seductive and psychologically vicious and reveals that it was almost impossible to determine the true feelings of POWs as they tended to align with whatever side offered the most protection. As a souvenir of his time in Korea, the Nationalists tattoo "FUCK COMMUNISM" on Yu Yuan's stomach.

On the surface, The Square and Snow Hunters appear to represent victories for freedom and self-determination in the battle for men's minds during the Cold War. Reading through these repatriation novels, it might seem like a large number of POWs opted not to return to their home country. But out of a total of 82,493 North Korean and South Korean prisoners of war, only 76 (74 from the North and 2 from the South) decided to go to a neutral country rather than go back. Those who decided not to repatriate first went to India with the Custodial Forces of India (CFI) in late 1953. In 1956, 50 of them moved to Brazil (see Walter G. Hermes, Truce Tent and Fighting Front, 1966).

Rather than simply be read as celebrations of individual freedom, these novels ought to be understood as critiques of a divided Korea. Myong-jun can go to either side after the ceasefire, but he thinks that both Stalinist North Korea and Christian-Capitalist South Korea are corrupt and lifeless, so opts for a neutral third country. Throughout Snow Hunters, Yohan is depicted as a passive and pacifist observer of war; he does no killing and displays compassion toward the people he encounters as his troop moves south, so the idea of returning to a country still technically at war is unthinkable. After the signing of the Armistice Agreement, there is no home for these former soldiers to go back to, so they are forced to imagine a home elsewhere.

This micro-genre of repatriation novels is part of a larger collection of transnational Korean War novels that includes recent works by Susan Choi, Hwang Sok-yong, Chang Rae Lee, Toni Morrison, and Gary Pak. From their scattered geographical perspectives and diverse political and poetic angles, these authors all address the Korean War as an event that spills outside the 1950-53 frame. Korean War novels can inspire intelligent, compassionate and historically engaged discussions of war, militarization, the perpetuation of division and the permanent state of crisis that those of us living on the peninsula and in the region have to deal with every day. Discussing a new generation of Korean literature, Chi-su Kim notes that:

Korean literary works remind readers that the Korean War is not yet over, but still in a state of ceasefire, while expressing a hope that true peace will soon come about so that the deep wounds of the Korean people can finally be healed. Indeed, Koreans dream about a world without war.

Next month, representatives of the United States and North Korea will hold a "Track 1.5 Meeting" in Singapore, a "half-official, half-non-official" effort to reopen much-needed dialogue between the countries. The Obama administration has the historic opportunity to end the Cold War in northeast Asia, to flip the tired, broken script of "strategic patience," of waiting for North Korea to denuclearize, and meet directly with the North Koreans to begin the difficult process of drafting a peace accord. There is more than enough historical precedent to inspire President Obama to take such bold steps before he leaves office. As former South Korean President Kim Dae Jung reminded George W. Bush in 2002:

President Reagan called the Soviet Union an "evil empire," but he had dialogue with Mikhail Gorbachev and sought détente, which brought about change in the communist system and the end of the cold war. President Nixon denounced Chairman Mao as a "war criminal," but he met with him and played a crucial role in normalizing relations with China and fostering its opening and reform. (Memoir, Vol.2, 466-67: Seoul Samin)

In addition to the Korean War novels mentioned above, if there is one literary work I would recommend that President Obama read over the holidays, it would be Theodor Geisel's classic Cold War allegory, The Butter Battle Book (1984). While the absurd, futile confrontation between the Yooks and the Zooks has ended in other parts of the world, tensions between Cold War adversaries continue to escalate on the Korean peninsula as North Korea threatens another test of its nuclear Big-Boy Boomeroo while the United States considers deploying a Jigger-Rock Snatchem or Terminal High-Altitude Area Defense (THAAD) battery in South Korea.

In 2015, 70 years will have passed since the United States unilaterally divided the Korean peninsula at the Thirty-Eighth Parallel, 70 years of hot and cold war with North Korea, and yet rather than gradually being torn down, the wall separating North and South Korea keeps getting higher and the threat of a return to war greater. As Geisel, aka Dr. Seuss, wrote:

And at that very instant we heard a klupp-klupp
of feet on the Wall and old VanItch klupped up!
The Boys in HIS Back Room had made him one too!
In his fist was another Big-Boy Boomeroo!
"I'll blow you," he yelled, "into pork and wee beans!
I'll butter-side-up you to small smithereens!"

George Orwell memorably described the Cold War as a "peace that is no peace." At this point, the U.S. project of maintaining a volatile and unstable status quo on the Korean peninsula through "strategic patience," or "we'll see. . .we will see. . ." must be viewed as a policy that is no policy. This unending butter battle has gone on long enough, and it is time for it to end.

For more information on the movement to end the Korean War, go to www.endthekoreanwar.org. See also the new documentary Memory of a Forgotten War.