For the past eight months or so, I've been getting to know about the life Andre Gray, a 34 year old bisexual man of color from the East End of Pittsburgh. Sadly, Andre's life was cut short before I had the chance to meet him, a turn of events I originally attributed to a rash of violence against young people of color in this region. It was the dawning realization that Andre was part of the LGBTQ community that forced me to confront my beliefs that black lives matter.

Andre 'Pok'ie' Gray (also known as Dre) was a young man much-loved throughout Pittsburgh. He was known for befriending many people, for his participation in the ballroom community and for being a very talented hair stylist. He was close to his mother and extended family, but he also took an active role mentoring other young gay and bi men of color through his chosen family, Project Silk. Andre proudly identified as a bisexual man of color.

Tragically, his life was cut short by gun violence at the age of 34 in October 2014. His family did not learn the truth about this crime until the spring of 2015 when his body was discovered and arrests were made. It was then that they also learned that Andre's much beloved dog and sidekick, Boss, was also killed during the crime.

I've been walking with his family for months, trying to offer whatever solace and comfort I can. The preliminary hearings have been held and everyone is now waiting for the trials to begin, trials that are likely to be unpleasant and potentially awful. The details of this crime are simply awful and my heart aches for Andre's family and friends. My heart also aches for other young gay and bi men of color who lost their friend, peer and brother. It has been important to me to actively demonstrate that if they go missing, we'll coming looking for them, too. But that's not enough -- planning for the worst case scenario is not sufficient to show that their lives are important to me, to us the larger community.

Andre's mother, Victoria Gray-Tillman, has told me that she worries his life story will be lost in the sordid details around the defendants and that she regrets that little Boss the dog will see no justice. Charges related to animal cruelty were dropped for as-of-yet unstated reasons. I left our last meeting with this small, but significant concern echoing in my heart and my head.

With Victoria's permission, I began brainstorming possible ways to establish a memorial for Andre. It was important to me to honor something about the life he led rather than the means of his death. And I kept thinking about other young gay and bi men of color in our community and across the nation. Designating some physical space as a tangible tribute seemed like a first step to creating more spaces that welcome and affirm young gay and bi men of color. I didn't want ownership of the idea so much as to rally the community -- including you who are reading this blog post -- to make this happen, to honor their vision.

Meanwhile, I had been regularly driving past a makeshift memorial to Andre that we created in April. I take a photo each time I drive by and post that photo on my social media channels. The owners of the lot have kept the cross and other items in place which is kind of them to do, but still more of a loan than a claimed space. 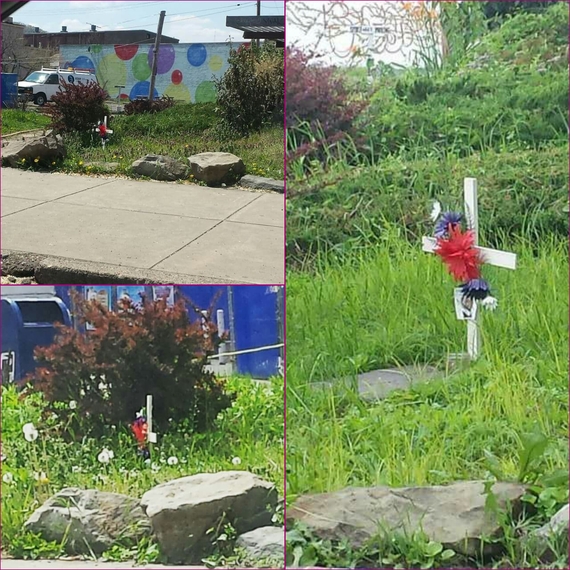 I thought first about a park, but that is near impossible to do these days without tens of thousands of dollars to invest. The director of Cafe con Leche casually said to me that she'd like a bench and a tree to honor her life because people could sit and think about her. Voila! We crafted together the idea of installing a memorial bench in the dog park in Andre's neighborhood, Lawrenceville.

A few emails later and we had a plan. The dog park, Bernard Run, happens to be named after a gay man in Lawrenceville who had also died too young, from cancer. City officials have a process in place to install memorial benches. Local organizations were willing to manage the paperwork. And we had the family's approval. We even came with a unique fundraising idea for the sustainability of the memorial -- but I'll save those details for another day. 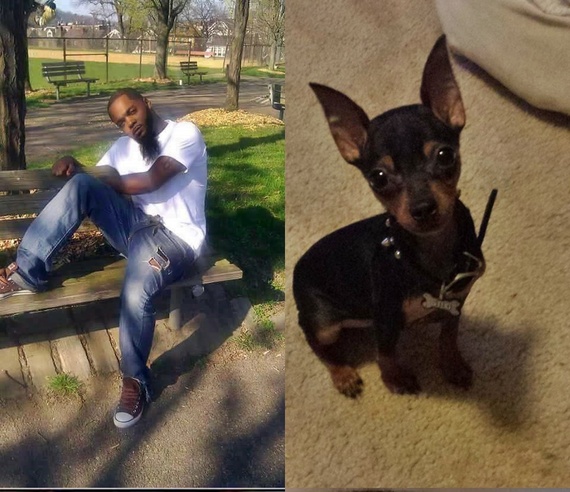 The bench location honors the relationship Andre had with his dog Boss and his other pets throughout his lifetime. It provides some small degree of closure to the fact that Boss was never found and could not be buried with Andre. And it creates a vibrant, dynamic place that celebrates the life of this wonderful man and affirms the value of the lives of all bi and gay men of color in Pittsburgh.

When I read the hashtag #BlackLivesMatter, I do think of Mike Brown, Eric Garner and Tamir Rice. I also think of Penny Proud, London Chanel and Candra Keels. But I also think of Andre and the two other young queer people of color who been murdered in Pittsburgh in the past two years. We don't have many conversations about their deaths as an LGBTQ community. And by default, we don't have enough conversations about their lives and the lives of other young people who may need us to support them now.

I think about the opportunity this movement has created for me, a white middle-aged cis lesbian, to confront my privilege and use it to lift up the voices of those whose lives I believe matter. It isn't like I've arrived at some new level of spiritual awakening, but rather than I have a specific question for myself when people mention the activism at Netroots Nation or Jennicet Guiterrez' courage at the White House -- would I be willing to do that for Andre?

I hope the answer is yes.

If you would like to contribute to the memorial for Andre Gray, we have a crowdfund set up through Crowdrise. Funds are being managed by the Bloomfield Garfield Association, a 501c3 organization based in Pittsburgh.