Desi Arnaz would have turned 95 years old this week.

Most recognized as the conga-playing Cuban bandleader on the television classic, I Love Lucy, Arnaz played the ultimate straight man to his wife and co-star, comedienne Lucille Ball during the show's six-year run.

And in a time when Latinos and people of color in general were largely absent from television, Arnaz was an unlikely television pioneer.

Born on March 2, 1917 in Santiago de Cuba, Desiderio Alberto Arnaz y de Acha III, was born into a life of privilege. His father was the city's mayor and his mother, the daughter of a Bicardi Rum company founder.

But in 1933 the U.S.-backed Batista revolution overthrew the Cuban government and forced his family to flee the country and seek political asylum in Miami, Florida.

Here, the young Arnaz mastered the guitar, joined a rumba band, and gained a following in the Miami nightclub scene with his Afro-Cuban beats; he is even credited for introducing the conga line to American audiences. He would later meet Ball during production of the 1940 film adaption of the Broadway musical in which he starred, Too Many Girls.

Although Arnaz was a successful recording artist and actor, many would argue that his greatest gift was as a producer, and at Desilu he fostered a culture of innovation that paved the way for the modern television sitcom, and the rerun.

In time for what would have been Arnaz’s 95th birthday, Meredith Asher provided the following written statement on behalf of her husband William Asher, principal director of the I Love Lucy show to the Huffington Post:

Bill would say Desi Arnaz was the real brains behind the 'I Love Lucy' Show. Bill had such tremendous respect for him for standing behind [him] as the authority on the set and Lucy respected that Bill was the final authority as the director. As strong of a personality as Lucy appeared to be, she actually was glad to have a strong man, such as Desi and such as Bill, calling the shots.

Arnaz made "every important creative decision," wrote Douglas McGrath in the New York Times. In addition to casting veteran character actor William Frawley for the part of grouchy landlord Fred Mertz and the beautiful stage actress, Vivian Vance for the role of frumpy landlady Ethel Mertz, Arnaz was an astute businessman who served as the executive producer of I Love Lucy, and later, the The Lucy-Desi Comedy Hour and The Untouchables.

It was he who wanted to put the show on film. (Until then, ''live'' shows were preserved on kinescope, a rudimentary technique, which has the warmth and depth of an image traced on foil.) It was he who wanted to do the show in front of a live audience. And it was he who persuaded the great cinematographer Karl Freund to devise for the first time what Freund originally told him would be impossible: the simultaneous shooting of wide shots, medium shots and close-ups as the show was played out in full view of a live audience.

But the success of television's favorite couple had its hurdles. For one thing, CBS was skeptical about the premise of the I Love Lucy show. Would the audiences believe that a "red-blooded American girl" married a Cuban-American?

On the 1955 variety program Toast of the Town hosted by Ed Sullivan, Arnaz recalls that time:

I think if it wouldn’t have been for Lucy, I would've stopped trying a long time ago because I was always the guy that didn't fit. When she did My Favorite Husband on the radio, they said I wasn’t the type to play the part. Then finally, she wanted to do the television show and she said, "Well, I wanna do it with Desi." So everybody again said, "Well, he's not right to play your husband." Finally, one executive at CBS said, "Well, maybe the audience would buy him, because after all, they have been married for 13 years."

The Monday night program was so popular, than when Lucy and Ricky Ricardo were about to welcome the birth of Little Ricky on the program, more than 70 percent of U.S. TV watchers (44 million people) tuned in to see the episode.

By 1960, the couple's marriage ended in divorce and Arnaz sold his share of the company to Ball. He retired to Del Mar, CA and later re-married. On December 2, 1986, Arnaz passed away in his home with his daughter Lucie at his side.

"Bill had tremendous love and respect for Desi and was just devastated when he died," writes Mrs. Asher.

SCROLL THROUGH THE SLIDESHOW BELOW TO SEE DESI ARNAZ OVER THE YEARS: 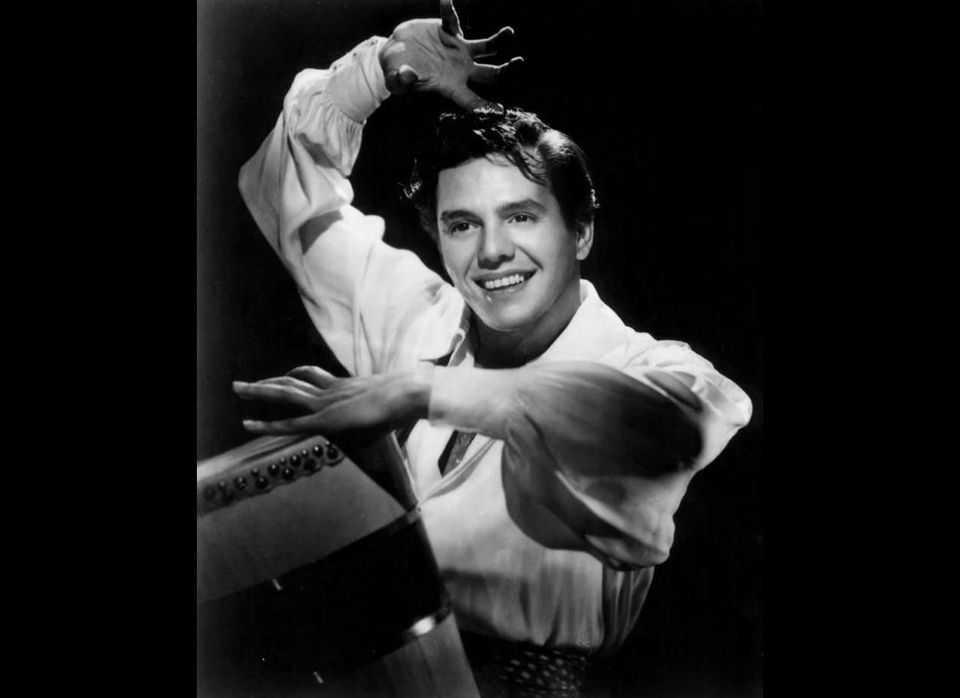 1 / 9
A Young Desi Arnaz Plays the Conga In This Publicity Photo
Publicity photo of Desi Arnaz, circa 1950. Photo Source: <a href="http://commons.wikimedia.org/wiki/File:Desi_Arnaz_1950.JPG" target="_hplink">Wikimedia Commons</a>.