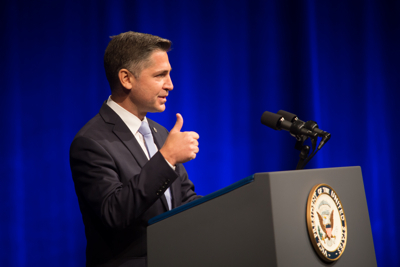 "I believe that Jim and Sarah saved more lives than almost any citizens in our nation's history. There are literally millions of Americans who will never know the suffering of gun violence because of Jim Brady."

My Remarks on the Legacy of James Brady Delivered at Memorial

My name is Dan Gross, and it is my privilege to lead the organization that bears Jim and Sarah Brady's name -- the Brady Campaign and Center to Prevent Gun Violence.

And it has been my greater honor and privilege to know Jim Brady and to call him my friend. In a way, even, he was my brother.

Every single time I saw Jim was precious to me. Either through words of wisdom or a joke or that twinkle that I'd swear never left his eyes even after he could no longer see. Jim had this way of turning even a brief encounter into a lifetime memory.

But as I was preparing these remarks, the one memory that stood out most was the very last time I saw Jim. It was extra special because I brought my two children to meet him -- this man who meant so much to me and had such a profound influence on my life and our nation.

As we were introducing my kids to Jim, Sarah, who had already met them, told Jim that my daughter plays tennis. And there there it was -- Jim flashed that mischievous grin as he playfully launched into a story about when Sarah took up tennis, and how she was more concerned with her fancy tennis outfit than she was with the sport itself. (He did also mention how great she looked in said outfit.)

But the most special moment came as we were saying goodbye. As we were walking out after a long visit, Jim called after my daughter and in his slurred speech, he said, "Good luck with your tennis."

And I believe that is why Jim and Sarah Brady are the embodiment of the gun violence prevention movement and the greatest champions we have ever seen for the safer nation we all want. Because Jim Brady really cared about all of us, Jim Brady really loved this nation.

When it comes down to it, there are three things Jim Brady's remarkable life tells us about gun violence in America.

First is the toll of gun violence: 30,000 Americans killed every year, about one million lives lost since Jim was shot. The statistics are staggering. But what Jim's story really shows us is the impact that just one of those bullets can have. Just one. That one bullet took Jim's physical strength; it caused profound lifelong health issues; it put his loving wife Sarah in the role of a lifelong caregiver; and it robbed a brilliant and remarkably popular young press secretary of his career.

My brother, too, was shot in the head and survived. And like Jim, my brother has flourished remarkably. As I said, in a way, Jim was my brother. And every year hundreds of thousands more Americans are introduced into our same tragic brotherhood and sisterhood -- a family no one ever wants to join -- all in an instant, all in exactly the same way.

Second, Jim's story taught us about the importance of stronger, sensible gun laws. Jim and Sarah showed our nation why we need to require a background check before buying a gun - which Jim's shooter was never subjected to in that Texas gun store.

And Jim and Sarah did not stop until they had pushed through one of the most important public safety laws in American history -- The Brady Handgun Violence Prevention Act -- which has stopped over two million gun sales to dangerous people and prevented countless more from even trying.

When the corporate gun lobby argued that requiring background checks was too inconvenient for gun buyers, Jim, in his inimitable way, responded from his wheelchair: "Well, I guess I'm paying for their convenience." Until the end he fought to Finish the Job and require Brady background checks on all gun sales. And Sarah is fighting with us still.

Third -- and most importantly -- Jim Brady teaches us about the strength of the human spirit, how victims can not only survive but thrive, how each of us can make a difference, and how any one of us can truly change this country -- and the world.

I believe that Jim and Sarah saved more lives than almost any citizens in our nation's history -- and that's not hyperbole. Think about it.

There are literally millions of Americans who will never know the suffering of gun violence because of Jim Brady. And he did it without the trappings of power or wealth. He was a man who had suffered a great injustice, who had been robbed of so much. But he refused to become paralyzed by bitterness or hopelessness. Jim Brady was a great man, and a good man, who changed the world in profound and extraordinary ways.

There will never be another Jim Brady. But that must not stop us from carrying on the fight that was so important to him.

Thank you, Jim Brady. God bless you.
And as Jim would want me to finish, "Thumbs up."