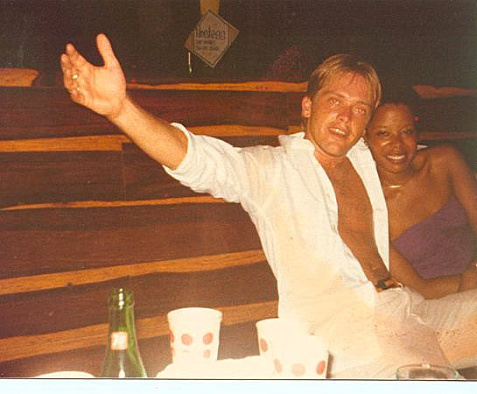 Kim Milford and the author vacationing in Mexico

The late Richard "Kim" Milford, who would have been 63-years-old this month, has the dubious distinction of having made some of the worst movies, ever.

One in particular, Laserblast, rivals Plan 9 From Outer Space for sheer "unwatchability." It is so bad that it has become a cult film sought after by collectors for being so bad.

It is also obvious to me that the director or producer or whoever is responsible for that hot mess of a film was in love with him. In fact, I think the whole point of the otherwise pointless film was to be near Kim. And watch how much the camera loved him, too.

He was stunning. I could always find him in a crowd -- like at the airport when I flew in to see him -- by following the double takes. But he had long ago tired of the attention and even found it counterproductive.

Men, including many who held his career in their hands, often hated him at first sight. A male guest at a Mexican resort called him an "Aryan wet dream." He seemed to blame Kim for the entire Holocaust.

It probably didn't help that earlier that evening Kim had played a practical joke on everyone in the third floor dining room by seeming to fall off the balcony. The building was surrounded by pools, and he landed, safely, in one of them -- he'd done stunts for years.

But his wet white jeans and shirt... well... they'd turned to cellophane. And the women loved it.

So, yes, he used those looks. They'd gotten him on the Broadway stage fresh out of high school -- mentored by Judy Garland and Michael Bennett, no less. He went on to do Hair and Rocky Horror -- the London and LA stage versions -- and Corvette Summer.

He also posed nude for Viva Magazine once. I loved his mother's response: "Big deal! I diapered all that!" But even if she'd been scandalized by it, it wouldn't have mattered.

He was addicted to everything that world offered -- the "trappings" most of all.

Putting cart before horse, he craved the sex, the drugs, the drama that came with fame. I believe that is what killed him, not the "complications from heart surgery" noted in his web bios.

I didn't realize how little time he had when I moved west, turning my back on the fast lane life to save my life. He died in 1988. But before I left, he put together a Hollywood night for me that I will never forget.

He had just been his sister's date for Oscar night -- she was up for an Academy Award, in fact. And in the glow of it all, he had also proposed to me. It was a lovely moment. But we couldn't have married for sooooo many reasons -- reasons I'm not about to discuss here.

But I think that wonderful night was his way of proving he meant it. It began at the home of a record producer where he spent most of the afternoon making sure I got very, very "mellow" on champagne... and other stuff. There was a heated pool, surrounded by a glass-walled aviary full of exotic birds.

I am terrified of deep water. He knew and was determined to change that. So he waded in, held out his arms, and said, "Would I ever let anything happen to you?"

I couldn't resist. I walked as far as I was willing, closed my eyes and leaned back onto his waiting arms as directed. And he "carried" me around the pool in big slow circles.

End of phobia. I wanted to live in that pool for the rest of my life. If he promised to keep doing that the whole time, that is.

But he had other things planned. We sped off in a rented sports car, headed for a studio lot -- which studio, I'm not sure. But we stopped in front of what looked like an airplane hangar. Where a sphinx from Elizabeth Taylor's Cleopatra sat glowering as if guarding the set.

Freaked me out. Totally. Until he explained that Debbie Reynolds had stored a huge collection of memorabilia there. He had gotten her permission to take me there that night.

And so I ran from rack to rack laughing like the drunken hussy I was and enjoying how happy he was to see me so happy. I don't think any of the people he knew were still capable of such childlike glee anymore. That I was, touched him deeply.

He sang for me, too, sitting at a grand piano -- improvising, mostly. And we still weren't done. We drove up and up and up to the place where the famous Rebel Without a Cause switchblade fight had been filmed.

I am a diehard James Dean fan -- he knew that, too. And parked there, top down, seats way back, and watched the stars as those movie kids had. Only these were real ones. Which... began to... move. First one, then more, streaking across the sky.

I grabbed his hand and said, "Milford... are you seeing this?" He smiled and said, "Well, it wasn't part of the plan. But it doesn't surprise me."

I still think he knew. And the next night I decided to thank him, yet again. I was going to catch a red-eye flight back to Chicago, and I knew that if I dropped off a letter in the airport mailbox he might receive it later the same day.

At the airport I raced to the mailbox at the airport while rummaging in my purse to find change to buy a stamp for my little love note. But I had none, and the gift shops were closed -- I was devastated.

Until I looked at the machine and noticed... a stamp, leftover from an earlier purchase, sticking halfway out of the little slot.

Didn't surprise me at all.

See clips of Kim in the ABC TV movie Rock A Die Baby here and here. An unreleased cut with Ike Turner on bass is available here.

Cynthia Dagnal-Myron's book of essays, The Keka Collection, can be purchased on Amazon.com.