November 9th is an important date in German history. It marks the day that the Berlin Wall fell, 20 years ago this month, physically and symbolically uniting a dissevered nation.

The reason it's not a national holiday in Germany, is that November 9th - specifically the night of November 9th - also marks a much darker anniversary: Kristallnacht, the so-called "Night of Broken Glass."

On that night in 1938 thousands of Jewish storefronts across Germany were smashed, hundreds of synagogues burnt, and roughly 30,000 Jews arrested and taken to concentration camps in a coordinated government action, while some 90 people were killed. Though preceded by a series of repressive laws, as the first large-scale campaign of violence and internment against Jews by the Nazi government it is often considered to be the beginning of the Holocaust.

"I was in school and I was the only Jew in the class,'' recalls Mr. Riess with a light German accent. "The other kids didn't know I was Jewish - blond, blue eyes and everything else.''

His teacher did know, however, and that day he asked the boy to see him after class.

That afternoon, Mr. Riess rode his bicycle to the family home in the Charlottenburg district, which doubled as his father's dental practice.

Normally a blue light outside the office signaled that his father was in his practice. Yet as he drew near, Mr. Riess saw that the light was out, which struck him as unusual.

What he didn't know at the time was that the Gestapo had already arrested his father. The Nazi officer had entered the dental practice and posed as a new patient, sitting in the waiting room until the last patient left, and then arresting Mr. Riess' father on the spot. In a remark that was either deeply cynical or surprisingly sympathetic the man instructed his father to "take a heavy coat and have a good dinner."

He was going to Sachsenhausen.

Instead of stopping, the young Mr. Riess cycled on until he reached a local grocery store owned by family friends. The family had a list of Germans willing to take in Jews for a week and Mr. Riess went to one these families to avoid arrest.

However that night, unable to contain his curiosity, he slipped out with his trusty bicycle and rode into the city.

"I was curious," he says simply.

"It was a full moon in November, a very nice night to walk around," recalls Mr. Riess, remembering a scene that in its grim context made for "a very strange picture of the city."

By that time most of the damage had been done. In the moonlight he saw the shattered windows of Jewish shops.

"They were broken with big bricks by the brownshirts," says Mr. Riess firmly, referring to the uniforms of the Nazi SA officers.

"It was so bad that a lot of glass went into the street and the cars couldn't go anywhere," says Mr. Riess. "They were afraid to damage their tires."

Yet on his bicycle the 17 year-old was able to go where cars couldn't and he cycled on through the strangely silent, moonlit streets. People had come outside to see what was happening, he recalls.

"Lots of people were out there. Not doing anything. Simply looking - like I was.''

Everyone was very quiet.

The Nazi government claimed that Kristallnacht was a spontaneous eruption of violence against Jews in reaction to the assassination of a Nazi officer by a Jewish youth - in Goebbels' words the nation "followed its healthy instincts." Yet in truth it was a carefully staged and executed event, with specific orders given to the Nazi troops carrying out the attacks. In his account, Mr. Riess describes neither anger nor hatred, but shock and uncertainty as the prevailing emotions among those present.

"What I saw were people walking around, not throwing any bricks but just being surprised by what was happening," says Mr. Riess. "They were just civilians - German citizens. I looked at their faces and I could tell they really didn't know."

In the distance beyond the questioning faces, Riess saw the synagogue that his family belonged to - a distinctive building with three domes. "I could see it burning," he remembers.
Police and firemen stood nearby making sure the fire didn't spread to other buildings, but did nothing to quench the blaze. It was one of some 267 synagogues that would burn or be ransacked across the country that night.

It's difficult to capture an event like Kristallnacht. Mere numbers are too cold and while personal accounts convey the heartbeat of the moment they are by their nature incomplete - the information gathered by one set of eyes in one place at one time.

Mr. Riess' story is just that - his own. It is the story of a person who experienced a critical, terrible moment in history and escaped with his life and his optimism intact. Miraculously, his father would later get out of the Sachsenhausen concentration camp and flee with his wife to Shanghai and Mr. Riess himself would escape Germany as part of the famous Kindertransport to England.

Yet despite the remarkable nature of the events in his life, in the foreword to his 2001 memoir - My Middle Name Is Israel - Mr. Riess stresses the shared nature of the experience.

"Yet I am sure that my story and the story of my parents is not that unusual. It is certainly not unique," he writes. 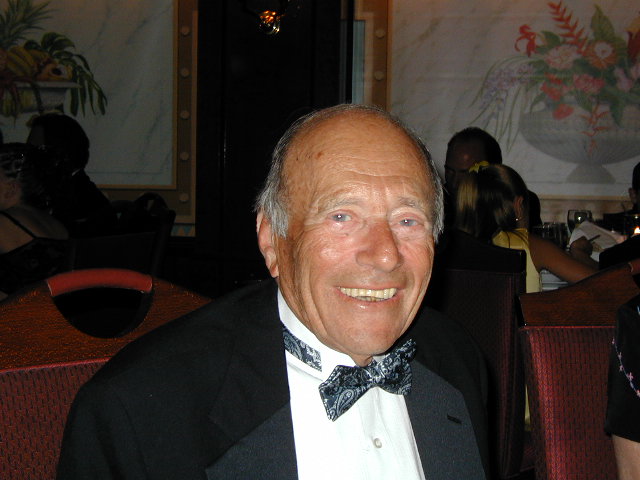