Its not every day you get on a small plane with a Princess and several Government Ministers. But early yesterday morning I found myself doing just that. I boarded a small plane at Lao's Vientiane airport, with Princess Astrid of Belgium, Ministers from New Zealand, Luxembourg, Norway and Zambia, and fellow Cluster Munition Coalition campaigners. The 30 minute flight took us to Xieng Khuang province, in the north of the country, for a VIP field trip to see the reality of cluster munitions in the world's most bombed country.

We are all here for the First Meeting of States Parties to the Convention on Cluster Munitions -- which basically means the first annual meeting since the cluster bomb treaty was agreed. It's a very relevant location, as more than 2 million tons of bombs were dropped on Laos during America's "secret war" between 1964 and 1973. At least 30 percent failed to detonate, and decades later, up to 80 million cluster bomblets lie undetonated across the country.

Stepping off the plane at Xieng Khuang province we were in a very rural area. Fields with water buffaloes and rice paddies abound, and the hilly countryside is crisscrossed with farmer's fields and small traditional wooden houses. It's a gentle, peaceful setting that belies the deadly war-time legacy which is all around -- all the villages here have UXO (unexploded ordnance) in their fields and surroundings. 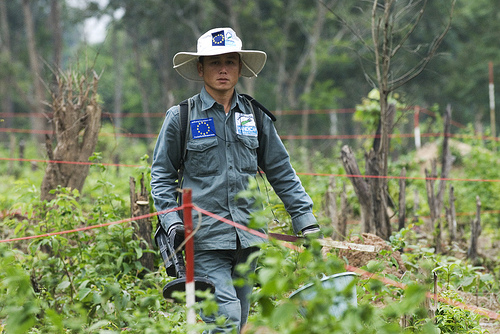 Noysuban - a 35 year old deminer with Handicap International since 2006 - carries his tools (a metal detector, a shovel, and a bucket) through the clearance site. Savannakhet Province, Laos 2010 © Tracie Williams / CMC

The clearance operations are well organized, professional and painstakingly slow. We visited Ban Tontai village, where the day before, the well-organized men and women in the clearance teams from UXO Lao had swept their metal detectors across the field, gently digging down each time they had a beep, like an archaeologist might excavate a valuable historic site. Except that instead of an ancient artifact, clearance operatives risk their lives uncovering deadly bomblets or "bombies".

We walked around a field where the ground was literally littered with small holes and flags, marking the dangerous bomblets buried inches beneath the surface. There must have been 50 munitions scattered across a field the size of a basketball court. A detonator is placed next to each munition as they are too dangerous to move. BLU 24 is one of the most common cluster bomblets in Laos, and there were at least 20 of these amongst mortars, shells and other unexploded ordnance in the field.

At a safe distance the clearance team manager did the safety checks -- she radioed allocated "sentries" around the village, to make sure no villager was anywhere near. Then Princess Astrid of Belgium and the Ministers from New Zealand and Luxembourg had the dubious honorary task of detonating the explosions. Even when you're expecting it, the "boom" is a shock, like a massive firework going off with plumes of black smoke curling up in the sky.

In Laos, there are lots and lots of cluster bomb survivors. Many organizations including Oxfam run training in safe agricultural practices (like how to dig gently in a way that won't trigger a bomblet if a spade hits it), and there are awareness raising programs in villages, especially to train children of the dangers, so they understand not to pick up the strange metallic tennis-ball sized objects they might find when playing. But its going to take many decades to rid Laos of its deadly war-time legacy. 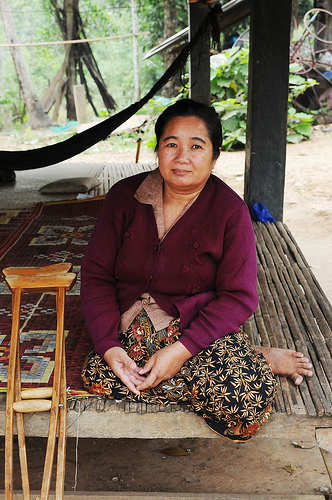 Chantava -- a 50 year old UXO survivor -- rests under her typical Lao house built on stilts. She lost her right leg when she hit a cluster munition while digging for bamboo shoots to cook for her family. Laos 2010 © Tracie Williams / CMC

The Convention on Cluster Munitions is a fantastic achievement, you can feel the pride in our Lao colleagues almost bursting out of them -- this international conference is a massive deal for a highly impoverished and often very marginalized country to run. And run it well they have. An outcome document which set out an ambitious vision for implementing the Treaty, and increasing the number of signatories is a notable achievement.

Its celebratory, but the reality of life in Laos was starkly reminded to us this morning, when the Lao Conference President reported a further tragic story of child casualties. Yesterday a 10-year-old girl died after the cluster bomb she picked up near her village in Bolikhamxay Province exploded. Her 15-year-old sister is still in hospital with some serious injuries.

This is why the Convention on Cluster Munitions is so important. 108 countries have signed it, now every other country must do the same.

Go to stoplclustermunitions.org to find out if your country has ratified the convention, and to join the campaign.