It has been said that "a man is known by the company he keeps." And Larry Dean Milligan (September 23, 1946 - July 14, 2011) kept excellent company -- from his dear friends who are lawyers, business people and advocates, to the homeless men, women and children whom he befriended and championed, to his partner, Johanna Argoud, and their family whom he loved with all his heart. 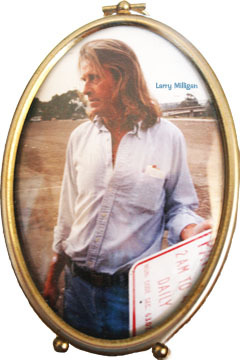 For over 20 years, Larry worked tirelessly with Johanna and wonderful colleagues in San Diego to help homeless people in many ways, including giving food to satisfy their hunger, fighting for shelter to protect them from the elements and working for public toilets for their personal hygiene and dignity.

Larry made his causes visible by making himself visible. He tabled his opinions on the San Diego Concourse. He wrote articles and lobbied policy makers. But perhaps the most influential thing that Larry did was that he sacrificed his own health through hunger strikes to bring awareness about the plight of homeless people.

He thought that homelessness should not be criminalized. To this end, he fought the imposition of illegal lodging tickets upon homeless people who were sleeping on public sidewalks in the City of San Diego because there was not enough space in the local homeless shelters.

In 2004, largely through Larry's efforts, the lawsuit, Spencer v. San Diego, was filed to protect homeless people from illegal lodging tickets. Larry was victorious when this lawsuit was settled in 2006 and homeless people were allowed to sleep outside on public areas in the City of San Diego from 9pm to 5:30 am without being ticketed by the police.

Larry took great pains to avoid confronting people. He used temperance, kindness and truth to bring about peaceful change. He was a true humanitarian.

And now a few words from some of the members of the excellent company that Larry kept.

• Judge Robert C. Coates, retired Superior Court judge, author of A Street Is Not A Home, remembers Larry for his positive influence on unhoused people and among housed people: "He was very constructive and respectful. The homeless community desperately needs people who are articulate and Larry was articulate."

• Liza Elliott writes, "Johanna and Larry ran a weekly feeding program for the homeless in Balboa Park. I worked with them there as well as at the TACO Feeding program at the Lutheran Church. We did sit-ins at City Hall, served pizza, beans and rice to the homeless and had lots of fun."

"Larry and Johanna were tireless advocates for the homeless, and it was my pleasure and honor to have served with them. The World will miss Larry. And so will I."

• Scott Dreher, Esq., Dreher Law Firm, co-counsel in Spencer v. San Diego feels "Larry was the last of the true Hippies with all their altruistic, idealistic spirit, and he never lost sight of our society's potential."

"Indeed, Larry promised to give up his Hunger Strike only if we agreed to file the Spencer case (which resulted in voiding the City of San Diego's policy of issuing "sleeping tickets" to homeless people in violation of the state and US Constitutions). His organizing skills were invaluable in convincing the court and city to resolve it in favor of homeless people! He was a vigorous advisor and a loving voice for the homeless to the end."

"He called me a couple weeks ago, and his voice was filled with enthusiasm, energy and readiness as he put forth more ideas on trying to fix the social imbalance that allows people in our country to lack basics such as food, a place to sleep, and shoes."

"I joked with him and told him we'd carry on as long as he promised not to go on another hunger strike."

"I loved him and miss him."

• Timothy D. Cohelan, Esq., Cohelan Khoury & Singer, co-counsel in Spencer v. San Diego shares, "Larry was a great spirit whom I first met in the mid 90's when we were handling a case against the city of San Diego for failure to designate or site emergency shelters and transitional housing (Hoffmaster vs City of San Diego) -- he kept me and others informed of the conditions as he saw them on the street."

"At one point he went on a hunger strike and some believe this contributed to his later health problems."

"Larry acted like a cheerleader on the Spencer case, always calling Scott [Dreher] or me to say how he appreciated our efforts, and how the homeless with whom he always talked, felt like someone cared. He will be missed."

• Steve Binder, Esq., San Diego Deputy Public Defender says, "Larry had the unique capability to bridge the discussion between the police and people on the streets and to help people realize that citations alone are a simple solution to a complex problem that continues to frustrate police and the people who receive the citations, alike."

"Larry was a builder. He built community."

• Dr. Ellen Beck, M.D. supervisor of The UCSD Student-Run Free Clinic Project at TACO (The Third Ave Coalition Organization) adds, "Larry was a remarkable person, a truly passionate change agent, who lived what he believed and helped to change laws and policy. He will be missed!"

• Jim Lovell, Executive Director, Third Avenue Charitable Organization, Inc. (TACO) notes, "Larry was an amazing force brought to bear on San Diego. His faith seemed to be what drew him to need to call those in power to act to treat all who live in their city with the same dignity that those who were wealthy and who had power were treated."

"When Larry fasted in order to get the city to open the winter shelter early, he was quick to point out that it was a "fast, not a hunger strike."

"When Larry would come to see me, I quickly learned that I should hold on tight because things would move very fast, and we may go to see a council member or we could be at the mayor's desk with signatures to record turning in or we may be in the office of the Chief of Police."

"Larry often verbally argued and pushed those in power, though he was always so quick to forgive and call them again and ask to meet. That was one of the most amazing parts of Larry. I will miss him deeply."

Not only will Larry be remembered for the excellent company he kept, but by the passion and devotion he exhibited as an outstanding leader, as an effective advocate for homeless people and as a genuine human being.

A week before his passing, Larry told Johanna's daughter, Ninon, about his personal philosophy. He said, "The most important thing to remember is that we are all equal."