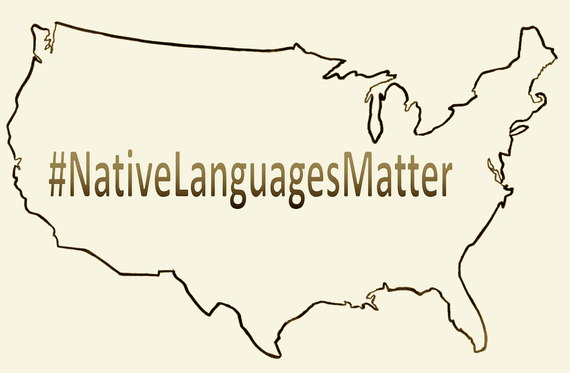 Language and justice connect. Indigenous communities keep alive the dream and hope of a world where their languages stay vital, vibrant, celebrated in homes and schools, voiced by children chattering away on playgrounds, intoned by spiritual leaders at ceremonial grounds. This week, we celebrate Martin Luther King, Jr. and his unflagging efforts for social and racial justice, efforts that in the end resulted in his assassination, and efforts that sadly retain relevance in our times. Many Native American communities also seek social justice, racial justice, and linguistic justice. In the shorthand of tags that so succinctly sum up the day's issues, #NativeLivesMatter. To that I add, #NativeLanguagesMatter.

The Pew Research Center reports that one in every four U.S. indigenous community members live in poverty. Can we talk about racial and social justice without considering statistics like that? In some places, Native American poverty rates are almost triple the national average. And can we talk about racial and social justice for Native communities without considering how indigenous languages fit into the picture? Emerging research suggests not. Centuries after colonial conquest on this continent, Native American communities are still here. Investigations into this resilience and the 'protective factors' enabling indigenous communities to survive and thrive suggest the answers may fall at the intersection of health, language, and culture. University of Victoria Indigenous scholar Onowa McIvor describes protective factors as a "[c]oncept that captures the notion of resources that build resilience, buffer against risk and may even have preventative effects for, in this case, health outcomes for Indigenous people." Attention to indigenous language transmission and use, and linguistic justice, can arguably have a restorative effect on wellness in a community.

The Civil Rights Era in the United States led to significant advances in equity for all people, including for minority communities as relates to linguistic diversity. In the 1970s, we saw important court cases like Lau v. Nichols, addressing inequity in the education of non-English speaking children, and Martin Luther King Junior Elementary School Children v. Ann Arbor School District, addressing inequity in the education of minority dialect-English speaking African American children. Civil rights extended to bilingual education legislation, which in turn extended to the creation of educational materials in numerous Native American languages in order to improve educational opportunities for those children who at that time, spoke only their mother tongue.

Language and justice connect. The United Nations recognizes that human rights include language rights. The 2007 UN Declaration on the Rights of Indigenous Peoples directly addresses language rights in three of its articles. Article 13 states that indigenous people have the basic human right to pass on their languages to their children and grandchildren, to maintain those languages, and to revitalize them. The United States was one of only four nations to vote against adopting this Declaration.

Language is always a vehicle for social justice. Righting wrongs. Native American language revitalization sustains the life force of communities. This is ever so true when it comes to immersing children in their heritage language. The existing generation of fluent speakers is elderly for many indigenous languages, perhaps even great-great-grandparents to the little ones. So-called "language nests", environments designed to recreate the home language environment by putting fluent speakers with infants and toddlers proved successful for the Māori in revitalizing their language, with estimates of 9,000 children educated during 2014 in Māori language nests, known as kohanga reo.

Just like warm blankets protect from the cold, indigenous languages swaddle Native children with their heritage language, enhancing their survival by conferring that protective effect suggested in these wellness studies.