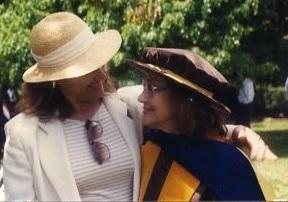 When she died at 94, I felt sad, of course, but also relieved after several years of slow decline during which no matter how I tried to give her what she needed, I was one degree of deterioration behind in caring for her. And I felt grateful -- grateful to her for the loving and gracious way she took her slow leave, and very grateful to the hospice team that guided our last months together. Thanks to them, she died at home, smiling to the end.

Soon after she was released from her last hospital stay, we were approved for hospice care (the program was covered by Medicare), from the Visiting Nurse Service of New York. We were in good hands. The first consultations were with the intense young Dr. Hutchison, who patiently and sympathetically explained the alternatives that I (as her health care proxy) needed to consider in order to guide my mother's treatment, and the reassuring Nurse Rosalie, who gently introduced me to the likely treatments she would need. (They also reviewed her medications and discarded those that no longer applied under the circumstances.) The conversations took place at my mother's bedside, and included her with smiles and gentle touches.

From then on, I knew I had a team behind me. If I got one of those crisis calls I had been living in dread of, now I could get advice from the 24-hour hot line Otherwise, Rosalie or her deputy visited at least once a week, Dr. Hutchison regularly (and every day at the end). They were joined by Rivka the social worker, who monitored my needs; she listened with compassion and advised without jargon.

None of them spent less than half an hour with my mother. They, in turn, arranged for other optional services -- someone to wash and color her hair, health aides to give her caretakers a few hours off and a dog trainer who volunteered to bring his golden retriever, Daisy, on visits to the bedridden. Since my mother had, in her professional life as a social worker, developed just such a program for hospitalized kids, this was an especially poignant gift.

With their support I was free to concentrate on enjoying my mother's laugh, basking in her loving smile and trying to interpret her unraveling sentences until I finally just let myself drift along with her. After her peaceful leave-taking, I was reminded of the line from Hamlet, "May flights of angels sing thee to thy rest." The hospice team were her angels. On Mother's Day I celebrate her life and also those angels who guided both of us to a loving end.

Photo: Suzanne Braun Levine and her mother, Esther Bernson Braun, in 1998, when Braun received her Ph.D. at 82.