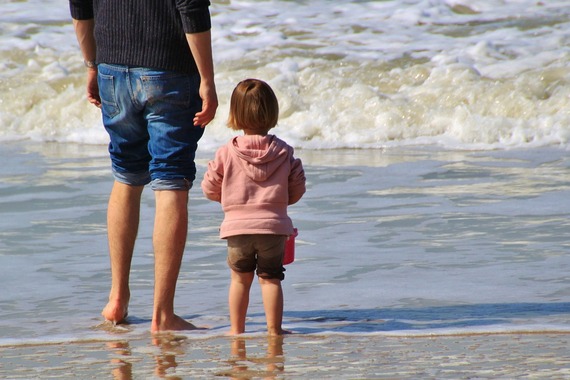 Photo by cocoparisienne via Pixabay

My father is one of the good guys, a true gentleman and an exceptional husband and parent. But there is another part of him that is increasingly irritable and short tempered. I am frightened which father I will remember because he has dementia and it is breaking my heart.

My father's story is inseparable from my mother's. Married 64 years, their lives are woven together into one. Dad was a pilot in the navy during WW2 flying the wounded home out of Guam. Several years after the war, he met my mother and it was love at first sight. Their lifelong devotion to each other has never wavered. My father went to work and came home every night bearing dessert. Mom always had dinner ready and lipstick on.They were harmonious and rarely out of tune with each other.

Dad and I grocery shopped every Saturday morning, a task he took over for my mother. He was a great golfer and won many tournaments, but that fell by the wayside. He wanted to be home where the family was so the grocery shopping became his new weekend "hobby." On Sundays we all piled into the station wagon and went to visit the grandparents.

He patiently taught us how to ice and roller skate, helped with homework and inspired my four brother's passion for fishing. At Christmas, the tree went up Christmas Eve after we kids were asleep and then he worked until dawn laying out an elaborate train track. I remember dad's coal black hair, but did not notice it turning gray until suddenly it was.

Dad passed on career opportunities so mom could remain near her family and we kids could stay in familiar schools. Some might view that as unambitious or passive. I view it as utterly selfless. Dad had a set of values that he never compromised on. He rarely drank, never cursed and was unfailingly polite and considerate. He still frets over his children when they are troubled and is pleased when they do well. It disturbs him deeply when they worry equally about him.

My Father is now 93 years old and my mother is 90. His vision is very poor and he has had several falls, a broken hip and cancer. Yet he is tough as nails and on most days shaves and is neatly dressed. His greatest enemy is his declining cognition.

Dementia alters the personality causing sudden, confusing mood swings. For a long while my father's dementia progressed slowly but in recent years has rapidly gained ground. He is quick to anger becoming demanding and churlish. My mother tends to him with endless patience and determination.They argue now as they never did in all their years together, but as difficult as he can be, she wholeheartedly defends him from any criticism.

It is bewildering and heart-wrenching to witness this kind, gentle man spiral into the darkness of dementia. In his dwindling moments of clarity, I can still glimpse the innate decency of the man who would lay down his life for his family. But, when I hear him arguing bitterly with my mother or he has an angry outburst, I don't know who this man is. Sometimes, it feels as if he is already gone from me although I know that will be a different reality. Overwhelmed with guilt and sadness, I have struggled to find a way to remember the man he was.

Dementia sufferers typically experience poor short term memory but can recall much from their younger days. Sharing memories of the past offers a powerful means of relating to my father in the present. These are the ways I find make our time reminiscing together as meaningful as possible.

1) Looking at photographs together.
Scanning them into a slideshow for the TV makes viewing easier for old eyes. Spending as much time on each photo as needed to create a relaxed environment and allowing the memory to unfold.

2) Making the time special.
Giving my undivided attention and focusing on the moment without any distractions. Gently encouraging positive reminiscing and happy memories.

3) Never correcting a mistaken memory.
Paying attention instead to the emotion and meaning behind it. Offering reassurance if he becomes confused or frustrated.

4) Carefully observing limitations.
Recognizing when he is tiring or becoming overwhelmed.

5) Above all, being patient and ending on a positive note.

I thought the father I knew was lost to me forever. But, when he grows sentimental or laughs while reminiscing, I believe this is the father I will remember.