Until the last minute I didn't believe it would happen. As we wound our way up the dark, mountain road into the hills outside of Port-au-Prince, I didn't know what to expect. I had read that Baby Doc lived on Montagne Noir, but we weren't headed in that direction.

Wondering if we would be searched when we arrived at Duvalier's house, my friend Kate, who had agreed to accompany me to meet Baby Doc, removed a pocket knife from her purse and left it with our Haitian driver, just in case.

I, on the other hand, was more worried more about what I was wearing than the pending interview. It was easier that way. I had ironed two outfits, but ended up wearing a knee-length plum skirt and sleeveless blouse just a shade lighter. I hung a striped silk scarf from India around my neck and carried a purple pouch purse from Bangkok over my shoulder--something small, but something to hold what I assumed would be the essentials--a notebook, pen, and camera, one that refused to work properly when I tried to document the event.

Perhaps this couture consciousness was a decent distraction from the seriousness to come, but my attention returned to the drive--our endless, winding ride--as our Toyota SUV rendezvoused with our friend Richard and his friend Fito in a white pick-up truck. This would be the final leg of the journey.

We passed the home of Rene Preval, then the president of Haiti, and stopped just before Duvalier's road, so Fito could call ahead to announce that we were almost there.

Passing a rather grand-looking, well-lit house on the left, we continued down the street a bit, before turning around and circling back to that same stone house, now on our right. This was it, we assumed, but there were a number of cars out front. Was there a party in progress?

We were met at the gate and ushered in along the driveway, where two vehicles were parked, one an SUV, the other, a Haitian State Police pick-up truck, but no officer in sight. As we approached the front door, we passed floor-to-ceiling windows that looked into the living room, where a number of people were gathered on two off-white couches that faced one another. Duvalier's Italian wife, Veronique Roy, cigarette in hand, answered the door when we knocked, welcomed us in, and escorted us onto a covered patio to the left, where she offered us something to drink, and when we declined, promptly left.

We were seated at an octagonal, wooden table with white wrought iron chairs, when Baby Doc himself stepped out onto the patio, wearing a charcoal, double-breasted blazer over a cable knit, gray sweater that zipped at the neck. He seemed smaller, thinner, and more stiff-necked than I'd expected. 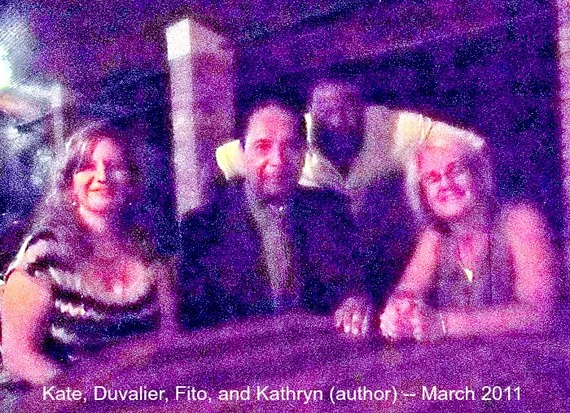 Once introductions were made and we were re-seated around the table, Richard did most of the talking and functioned as translator, explaining to Duvalier that I was intrigued by the former president and had hoped to meet him before leaving Port-au-Prince and moving back to the U.S. the following Monday.

Baby Doc, who spoke to us only in French, said he didn't want to talk about the current political situation in Haiti. Instead he explained how happy he was to be back in Haiti, how saddened he was by the deplorable conditions his people were living in, and how surprised he was by the warm welcome he'd received, especially from young people who hadn't even been alive when he was president.

I asked the former dictator how he thought the current Haitian suffering could be alleviated.

Duvalier explained that there was no single or easy answer, but that "unity" was essential, unity between the rich and poor, between those who have much and those who have so little, that the government of Haiti needed to give the people "what they want," and largely that involved not allowing them to live in such inhumane conditions.

Clearly, his was an easy answer--a rhetoric few could disagree with--but I didn't press the issue further. I knew my question was overly broad and understood why he'd answered in equally sweeping terms.

But I could feel myself being pulled in. Baby Doc was feeding me what he knew I wanted to hear. He and I both knew it, but I couldn't help responding to what seemed like genuine care and concern--his whispered tone, his furrowed brow, his leaning closer as he talked to me. I could almost watch myself falling for this rhetoric, and I was reeling because of it.

Still dizzied, I asked the former president what he thought made him unique, "Apart from your father having been president before you, when did you understand that you were unique in and of yourself, that you had something valuable to offer the country?"

Duvalier's answer here surprised me, as he insisted that he was not "unique," that he had come to the palace at age 6, that he'd had a great education, that when his father told him at 18 he would eventually be president, he had said, "No thank you!" He didn't want to be president. He didn't want that job.

So Kate asked what he thought his biggest accomplishment was as president. But Baby Doc said that when you're president, all accomplishments are equally significant, because "everything you do is your job, your responsibility." He went on to explain that he had left the country in 1986 and gone into exile willingly, to avoid bloodshed, that as he was leaving, he was more concerned about his people than he was about himself.

At this point, Richard turned to me and asked, "Don't you have another question, you came here hoping to ask?"

"Yes," I said looking intently at Duvalier across the table. "A number of people have told me things were more stable in Haiti, when you were president, and things are decidedly unstable now. I read in the media, that you have returned to Haiti not wanting to be president again, but if things were indeed more stable under your administration, why would you not want to be president again? Don't you think you would have something valuable to offer your people?"

To this Duvalier said simply and matter-of-factly, "We'll have to see what the people want."

My conversation with Duvalier ended soon after that, but what the Haitian people wanted at that point was far from clear. It was an unsettled time for Haiti. Things weren't even close to calm, as later that same week the head of one Haitian political party was assassinated in his home, former president Aristide, like Duvalier, returned to Haiti from exile in South Africa, and a final round of presidential elections were held.

But when I returned to the U.S. the week following my interview with Duvalier, when I found myself trying to settle again in middle America after a year in Port-au-Prince and a year before that in Vietnam, I found myself still reeling from having met Baby Doc. The encounter whirl-winded and exhausted me. I felt depleted and confused by having liked the version of Duvalier I met that night.

I didn't like the fact that Baby Doc, the man, had intrigued me, that the details around him had seemed so ordinary. The fact that his house, though perhaps the grandest on his street, was not as spectacular as I had suspected it would be. The couches in the living room seemed old and worn. There were no fancy fixtures. The wrought iron chairs on the patio needed paint.

But then again, that's what we all amount to in the end--the peeling paint, the nicks, the scars. The couches need recovering.

The story of Haiti is largely one of exile and variations on that theme--coerced comings and goings, arriving unwillingly on a tiny island, you then don't want to leave.

So it was for Jean-Claude Duvalier, made president for life at age 19 when his father died, a job he didn't want, a role he didn't want to play. He ruled for 15 years, was exiled for 25, came home to Haiti again, and now, 3 years later, has died of a heart attack at his home in Port-au-Prince.

Though my partner Sara and I went willingly to Haiti and now live in Ecuador, we were not at all ready to leave, and having left felt like a loss, an amputation. Haiti is the phantom limb, the one I dream about, the one that calls to me at night.

Eventually, we all get kicked off one island or another. A tribal council is convened. The votes are cast.

And someone has to go.

Another version of this post appears on my personal blog.