I recently received the sad news that my dear friend and publisher Jeremy Tarcher passed away. Few who walked the earth were ever as good a friend, mentor, or advisor as Jeremy.

As his New York Times obituary noted, Jeremy made his mark publishing groundbreaking new age best-sellers like "The Aquarian Conspiracy," a guide to new age consciousness, "Drawing on the Right Side of Your Brain," and "Seven Years In Tibet."

The Los Angeles Times's remembrance pointed out "the maverick publisher" might have continued an earlier successful streak of celebrity biographies "if he hadn't made a stop at the Esalen Institute, the Northern California hub of New Age thinking about human potential, where figures like Carlos Castaneda and Rollo May were challenging conventional ideas about the workings of the mind and body."

Jeremy proved being a maverick worked in life and business, lessons he shared as a board member of my nonprofit public interest group Consumer Watchdog.

He was one of the most expansive thinkers 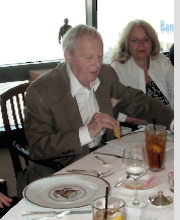 I have ever known. The twinkle in his Caribbean blue eyes when he was onto an idea that he knew was revolutionary and righteous was beyond brilliant.

He was an amazing spirit, a man whose mind soared in many dimensions through literature, science, philosophy, space and humanism, to refract the necessary light from the life of the mind that would nurture whatever project he undertook.

A generation or two behind him, I was jealous of the 60s era he channeled, as partner to puppeteer Shari Lewis of "Lamb Chop" fame, king of new age publishing, and a man who was able to legally ingest acid because he was witness to its chemical composition long before it was outlawed. In fact, a napkin with LSD's molecular structure hung on his office wall, given to him roadside by the chemist who created it and whom he published.

He published enlightening books, gave of his mind and time to those with big ideas and provocative approaches and helped us all be more open and expansive.

His eyes and his imagination soared even as he was stricken by Parkinson's, cancer and infections that riddled his body.

I was one of his projects, more so than even my books, which were never best sellers. As a publisher, he was generous, perceptive, kind. Director/producer/co-writer. He was Socrates, Gene Roddenberry and Buddha all in one.

He was a man of infinite patience. A romantic, a gentleman. His blue eyes blazing from across the table, usually at one of Los Angeles's almost-New York delis, he would habitually order a hollowed out bagel, white fish, only if it was moist, and always one slice of "toe-mah'-toe. Then we would settle into our ritual talks of how to articulate and solve the world's ills.

Jeremy had style and grace and an abundance of the universe's dignity. When he looked at you, you knew why you existed. Your ideas, your potential, your soul. And he wanted to help make it clearer, stronger, as a voice.

He was blessed with an open mind and a sincere heart. He was from another time and, I always suspected, another place. Somewhere out of one's Star Trek's utopian worlds. He wrote for the original series and it often felt, given his goodness, that he hailed from one of that universe's more benevolent corners.

His mind and his heart were ever youthful and hopeful. He lived believing in human growth, evolution, and his body and eyes emanated that truth. The life of the mind was the great concern of his life.

He was good at relationships, feelings, perspective, proportion, none of which are my strengths.

One of the great debts I owe Ralph Nader is introducing us. When we met circa 1998, I had just breached 30, and, more or less, knew who I was and that I would be a life-long consumer advocate going to war with big corporations and governmental power. He was Siddhartha, understanding many paths, and the power of deliberation.

Both New York expats, we lamented the loss of LA's best delis over the years that we met at for breakfast: the Carnegie, The Stage, Junior's. He was a letter writer too, and wrote Marvin Davis upon the closing of The Stage with a humanistic appeal to reopen the place as a charitable act for the City of Angels. Davis never responded.

Jeremy published groundbreaking books and changed how we think. Those he didn't publish, but nurtured nonetheless throughout, were his too.

He cared deeply about the diaspora of humanity and raising its consciousness. Jeremy lived through, and catalyzed, a great awakening. Jeremy stood for the proposition that higher consciousness and spiritual planes are there for us. We just need to open our eyes and take the leap. He viewed psychedelic drugs as one part of that awakening.

As a mentor, and a friend, he transcended all expectations and opened parts of your mind and your heart that you did not realize could be. The countless hours he spent nurturing, noodling, editing, and revising I can only hope to pay forward and make resonant for those younger and with less experience. All of us who knew Jeremy well and benefited from his beneficence should take that vow, the "Tarcher Challenge." He saw something in me and helped it grew. Our gratitude should be the water for new seeds.

We both came from a long line of sufferers: New York Jews still grappling with their diaspora. But he remembered the life and its elements that we all have to be grateful for. I still often forget my life is charmed. But Jeremy never did and that makes me remember.

I will miss my friend, our deep talks about the nature of things and the eyes with which we see the world. Like all great teachers, his words, and what he would say now about the world around us, will be with me. He is my own eternal Obi-Wan Kenobi, helping light the way. Only instead of carrying a light saber, Jeremy is smoking a joint in a hot spring at the Esalen Institute in Big Sur with a big smile.