Sarah Gilliam, a professional photographer from Tennessee, was busy at work on May 30 when she received a disturbing and confusing email. The note contained a link to a blog about a 3-year-old named Reilly who had passed away from cancer. Gilliam recognized the boy right away. There, staring back at her from the screen was her own 5-year-old, Jack, in a photo she had taken herself on his birthday.

Gilliam and her husband, Patrick, investigated, and found out that their family was at the center of a very elaborate hoax. Dozens of photos that Gilliam had posted on her private blog had been stolen and reused. In a phone interview with The Huffington Post, Gilliam explained how the story -- first reported by The Tennessean -- unraveled. 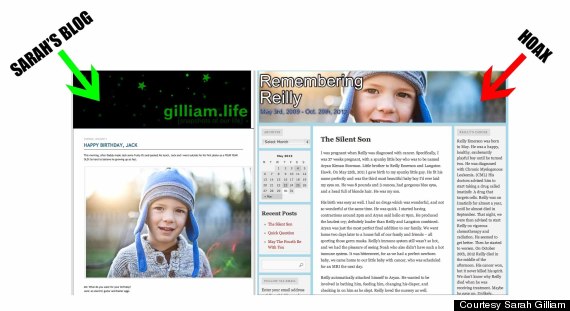 (Scroll down for more images and clips from both blogs.)

For about 10 months, a person claiming to be a mom named Casey Bowman kept a blog called "Remembering Reilly" documenting her son's battle with leukemia. The dark and detailed posts articulated painful milestones after Reilly's passing -- the moment she had to tell her older son, Langston, the family's first Thanksgiving without Reilly, and even her own struggle with packing up Reilly's things.

The boy's cancer wasn't the only tragedy that Bowman wrote about. She claimed to have lost another baby to SIDS, and wrote vividly about the miscarriage she had following Reilly's diagnosis.

Not long after "Remembering Reilly" appeared, a network of other sites popped up that were somehow related to the boy, Gilliam said. There was another blog that seemed to have been written by Bowman while her son was alive, and an updated Facebook page in Reilly's honor. A "friend" of Reilly's, a little boy named Noah, also had his own tribute blog. And finally, there was a five-minute YouTube video -- a montage made up of several pictures of Reilly (really Jack) with inspirational messages laid on top.

Every single one of these pieces was created by the person behind the hoax.

According to the Columbia Daily Herald, Bowman never asked for donations on Facebook, but posted images of shirts that were supposedly available for purchase as tribute to both boys.

According to The Tennessean, Shelly Jackson, a member of the Warrior Eli Hoax Group -- a blog that aims to expose Internet hoaxes -- came across "Remembering Reilly" because she had a Google alert set for "chronic myelogenous leukemia," a diagnosis that her own son shares with Reilly. She realized that the details of Reilly's diagnosis seemed off, so she looked into the story further. Using a reverse Google image search, Jackson found Sarah Gilliam's blog, with dozens of matching photos. In an email to Gilliam that she sent to HuffPost, Jackson wrote:

One of my most recent cases involves someone using photos that I believe are of your son Jack claiming he was a leukemia patient named Reilly Bowman. This is particularly close to home for me because the blog was for a child with the same type of leukemia my son has, and I thought a child had died from it when I initially read the blog for “Reilly.”

Gilliam then posted a screenshot of the blog to her Instagram and Facebook accounts asking friends for help, she said. Her husband contacted WordPress, which hosted the blogs, and asked for them to be removed. By that night, all traces of "Remembering Reilly" were gone. The Huffington Post has obtained images from the defunct blog, which are available below.

Who Is Casey Bowman?

Taryn Harper Wright who updates the Warrior Eli blog writes that that the person behind "Remembering Reilly" is a 17-year-old girl whose name has not been released. She started the hoax after hearing Taylor Swift's song "Ronan," a tribute to a little boy named Ronan Thompson who died of cancer. During the teen's run as Casey Bowman, she even contacted another mom who had lost her son to cancer and the two became Internet friends, bonded by their similar stories.

The teen has since posted a public apology on Facebook, and sent the following email to Gilliam:

I just wanted to directly say to you and your husband that I am so very sorry for what I have done. There is nothing I can say to ease your minds and I do agree that you have every right - beyond every right to be furious with me, and with what I have done. I took your son and said that he died. It is an ungrateful, shameful, humiliating, down right awful thing that I did. If I were in your shoes I would feel the exact same way. There is nothing much to say, except that I am sorry, and I know I keep repeating it to you, but I feel like I forever owe you an apology. I am thinking of talking to a psychologist about what I have done and hopefully he will help me to never do it again. I have also taken a promise to myself to slowly take myself away from the internet and technology and hopefully the absence of technology will help me to stop, find myself, and reflect on the pain I caused and change my ways.

Please find it somewhere to accept my apology. Please stay mad at me, and stay upset for as long as you need, for you ought to, but whether it is a year from now, or 10 years from now, I hope you can forgive me just a little.

According to Gilliam, her lawyer speculates that the family might have a copyright or identify theft case, but it's still unclear what action can be taken.

Gilliam's bigger concern -- one that many parents struggle with -- is what this means for privacy and social media on a larger scale. Gilliam's Facebook and Instagram were private. Her "mundane" blog (as she described it) was only available via a link and wasn't searchable via Google, she said, and she updated it just to keep family members in the loop. Social media is great for that purpose, Gilliam explained. "I love watching my friend's kid's first dance recitals, I like seeing that my uncle caught a huge fish on the river," she said. However, she has no idea how her photos were found or what happens now that they're "out there."

Throughout the ordeal, Gilliam has kept a level head. She knows that this isn't the worst thing that could happen to her son or family. However, it was a wake-up call. "Sharing and social media and blogging is not slowing down," she said.

Gilliam is currently pregnant, and was looking forward to blogging about and posting photos of her next child to share with her family. Now, she is reconsidering. "Maybe we'll just send prints in the mail ... I have a dark room in my basement, I can get real underground if I want to," she said.

Correction: An earlier version of this story stated that "Casey Bowman" had contacted Ronan's mother. She became friends with a different mom whose son, Ty, died of cancer as well.

The "Remembering Reilly" Story In Photos