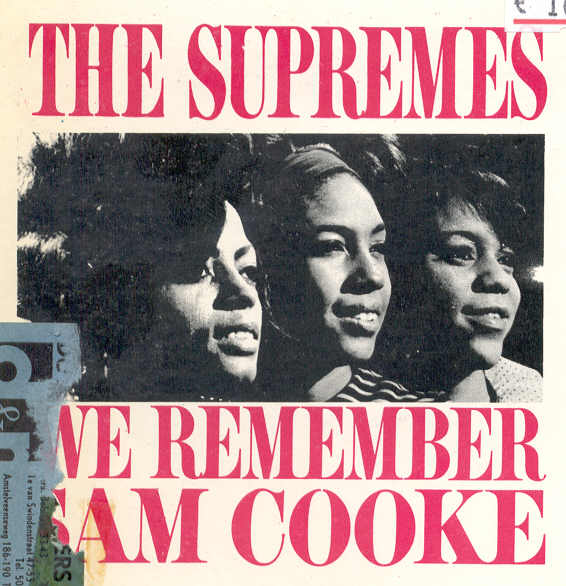 On Dec. 11, 1964, singer Sam Cooke, aged 33, was murdered under questionable circumstances inside a Los Angeles motel. Weeks after his death, Sam Cooke became one of the many martyrs of the Civil Rights Movement, when "A Change is Gonna Come," a song that he recorded in 1963, was released and became an anthem of the movement. But Cooke's impact was much greater than the song, as he served as a role model for a generation of young Black artists seeking to balance their responsibilities as black artists with the demands and allure of mainstream audiences who were beginning to welcome them. It was in this spirit that The Supremes released We Remember Sam Cooke in the spring of 1965.

To be sure there were many tributes to Sam Cooke after his death; friend and road-mate King Curtis recorded and album instrumental covers of Cooke's songs. Otis Redding, in many ways Cooke's heir-apparent, recorded versions Cooke's songs throughout his career, beginning with his debut album Pain in My Heart (1964), which included a cover of Cooke's pop breakthrough, "You Send Me." It was with his signature album, Otis Blue: Otis Redding Sings Soul (which included the original version of "Respect"), that Redding pays fitting tribute to Cooke recording versions of "Shake," "Wonderful World" and a rendition of "A Change Is Gonna Come" that would have made Cooke proud.

The most surprising tribute came from the Motown camp, most well known in 1965 for its plastic Soul, of which the trio of Mary Wilson, Florence Ballard and Diana Ross were the flagship product. Signed to Motown in 1961 as The Primettes, The Supremes breakthrough occurred in the summer of 1964 when "Where Did Our Love Go?" topped the pop charts, beginning a remarkable string of five straight #1 pop singles from the summer of 1964 until the autumn of 1965 including signature tunes like "Come See About Me" and "Baby Love."

Still existing somewhere between the teen pop scene that they had come to dominate and Berry Gordy's vision of the group as an exemplar of what Andre Harrell would later call "High Negro Style," We Remember Sam Cooke, seemed an odd choice for The Supremes. Indeed, "Stop in the Name of Love," the trio fourth #1 pop single, topped the charts only a month before the release of the Cooke tribute.

But we remember Sam Cooke, spoke broadly to Gordy's intent to establish The Supremes as a premiere high-end pop entity. Gordy famously described his company as the "Sound of Young America," making clear his ambition to reach the widest audience possible.

In that spirit, while the group was squeezing out chart-topping singles from their 1964 album Where Did Our Love Go?, The Supremes actually released three other albums in the period, A Bit of Liverpool (1964), The Supremes Sing Country, Western and Pop (1965) and finally We Remember Sam Cooke. With these recordings, Gordy was less interested in generating hit singles and more focused on highlighting the versatility of The Supremes, by celebrating their take on the British Invasion and Country & Western music (with a nod to Ray Charles). For Gordy, the end game was not simply the domination of the pop charts, but the establishment of The Supremes as a recognizable American brand that transcended the limits that racialized society posed for Black performers and entrepreneurs.

As The Supremes charted a path that would lead them to Las Vegas, only a few years after venues on the strip were desegregated, high end supper clubs like New York's Copacabana, and concert spaces like the Philharmonic Hall at Lincoln Center, they looked up to a figure like Cooke, whose own ability to breakthrough in such spaces created opportunities for groups like The Supremes; The Supremes at the Copa (recorded in August of 1965) was released a year after Cooke's own Sam Cooke at the Copa. At his peak, Cooke represented the ability of black artists to balance the artistic sensibilities that were produced in the context of segregated black life with the demands of a mainstream pop arena that largely demanded that Black artists forego the former. Sam Cooke was surely primed for greater mainstream success, when he was murdered. In many ways, The Supremes got to a promised land, that Cooke was not able to.

Though The Supremes never actively sought to record the kind of socially conscious music on the level of "A Change is Gonna Come" and were never intimately engaged to the Civil Rights struggle in the ways that figures like Cooke, Harry Belafonte and Nina Simone were (though they attended Martin Luther King Jr.'s funeral), they successfully waged battle on behalf of respectable Black images in mainstream culture. Take for instance the impact of The Supremes fifteen appearances on The Ed Sullivan Show between 1964 and 1969, when Diana Ross bid adieu to The Supremes on Sullivan's show; Their visibility on the highly rated Sunday night variety introduced many Americans to Black-American style.

In a world where African Americans were thought incapable of doing much beyond the symbolic confines of Black life, The Supremes recorded a tribute to the Great American Songbook with The Supremes Sing Rodgers and Hart (1967), released only months after The Supremes Sing Holland-Dozier-Holland (1967). The latter recording, importantly, had the effect of elevating the trio of Motown songwriters and producers (and the primary producers for The Supremes) to a level worthy of the Great American Songbook. What Berry Gordy understood was that Motown represented the best of what America could produce, and Sam Cooke was a constant reminder of what those possibilities were.

The legacy of the historic period that produced Sam Cooke and The Supremes, will be on display early next year, with the opening of Come See About Me: The Mary Wilson Supremes Collection at the African American Museum in Philadelphia. The exhibit conceived by Mary Wilson, a founding member of the Supremes, will center on many of the gowns worn by the group in their heyday, as archival footage, photographs, and other representations of their rise from the Brewster Douglas Projects in Detroit to the most visible Black women in the world.