That is both a fact and a play on the song Born in Chicago by the Paul Butterfield Blues band.

Being born at that time and place, I fell in love with the sound of rock and roll at an early age. We had radios and a stereo (that my electrical-engineer brother built) in the house. Every car I was ever in at least had an AM radio. Popular music had even permeated Saturday morning cartoons. Remember The Jackson 5ive? The Osmonds? Josie and the Pussycats?

I had a transistor radio with an earphone, and would listen to AM radio on school nights when I was supposed to be sleeping. The oldies station played 50's rock and roll. Even the Top 40 stations like WLS were fairly eclectic then, and you could hear "serious" rock artists mixed in with the pop and one-hit wonders.

When I was in fourth grade, I went to see the Led Zeppelin concert film The Song Remains the Same with my friends. Jimmy Page became my first guitar hero. My favorite part was a clip of the song Since I've Been Loving You, and the melancholy sound produced when he bent the strings.

AM on the transistor gave way to FM on the basement stereo after school. Brit bands like Zeppelin, the Who and the Stones were dominant. I started to read about them as I grew older. I learned the seeds of the British Invasion were planted by American blues. I read about Eric Clapton starting as a blues purist, and how he quit The Yardbirds because they were too pop. I discovered that Jimi Hendrix was a blues and soul band sideman in the South before he went to England and changed the sound and concept of electric guitar. I listened, I read, I studied.

By high school, Jimi became was my favorite guitar hero, mostly due to the soulful stuff, like The Wind Cries Mary, Little Wing and Castles Made of Sand. I spent a lot of time at the local record store, and got to know the owner, and we'd talk about guitar players. Just after I graduated, I heard the Stevie Ray Vaughan songs Pride and Joy and Love Struck Baby on the radio. I went to the record store the next day.

"I was waiting for you to come in," said the owner. He already had a copy of Texas Flood waiting for me by the register. "They say Stevie plays Hendrix live. There aren't any Jimi covers on this album, but you're going to like it anyway" he added. He was right.

Each time Stevie released a new record, I bought it immediately. I saw him in concert twice during my college years. The first time, he opened for his brother Jimmie's band, the Fabulous Thunderbirds. As Jimmie said, Stevie played "like he was breaking out of jail." He could play fast as lightning, or slowly burn through your soul. I was aware of Stevie's struggles with substance abuse, but I never saw any evidence of it.

I missed a few chances to see him live, but that was because I started work at 6:30 in the morning, and stopped going to weeknight concerts. In the summer of 1990, Eric Clapton went on tour. Weekend dates were announced for Alpine Valley in Wisconsin, with two special opening acts: Robert Cray and Stevie Ray Vaughan. I slept out for tickets to make sure I could go on Saturday, August 26th, along with family and friends.

Robert Cray was fantastic as always, but I was ready to see Stevie. I'd heard he was even better sober. When he walked on stage, he looked confident and happy. Then he started playing.

I had gotten the chills at concerts before, but that was rare, and usually only once or twice during a performance. I lost count of the number of times Stevie gave me the chills that night, but I think it was three times during Riviera Paradise alone. When he covered Jimi's Voodoo Child (Slight Return), the hair on my arms and neck stood up. It was like he was channeling Hendrix. Clapton was good, but everyone was raving about Stevie in the parking lot after the show. The same lineup played the next night as well, Sunday August 27th, but only one member of our group went to both shows.

At work on Monday morning, someone told me they heard Stevie Ray Vaughan was killed in a helicopter crash. When I heard it myself, I went outside and fought back tears.

25 years ago, Stevie Ray Vaughan played the guitar with more feeling, technique and passion than anyone I've ever seen, and touched my very soul.

Rave on Stevie, hope you're jammin' with Jimi. 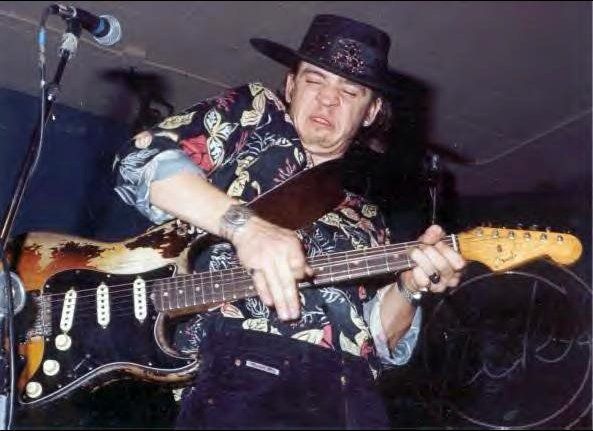