Last week marked the 10th anniversary of the 2004 Indian Ocean Earthquake or Asian Tsunami Disaster, which killed an estimated 230,000 people in 14 countries. It has earned its place as one of the deadliest natural disasters in history, yet it also elicited one of the greatest outpourings of humanitarian response ever from the global community.

Dr. Ronna Kabatznick was living in Thailand practicing meditation in the mountains at the time, on sabbatical from her career as a psychologist. When she heard that 8,000 people had been killed in that country alone, she immediately flew to a beach disaster area to help. The job she voluntarily took on was to support traumatized survivors during the first week after the tragedy as they searched for parents, children, siblings, brides, grooms, and friends in hospitals and identified them in morgues.

When she arrived, Ronna said, the normally pristine Thai beach areas were filled with soggy corpses and stunned survivors. Everything and everyone was in chaos. People were frantic. The areas quickly filled with medical personnel, trucks carrying corpses, and computer banks crammed with people searching through the photographs of the dead -- which were being uploaded hour by hour -- to try to identify their missing loved ones. 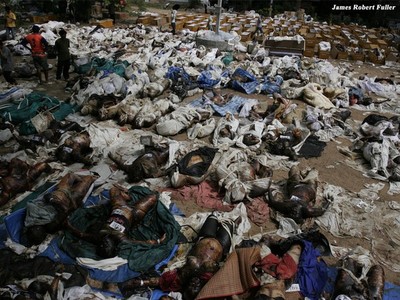 The floor of the makeshift morgue was covered with about 500 bodies, and more were lying outside. The corpses had been drenched in seawater and exposed to Thailand's searing heat, leaving most of them blackened, bloated and unrecognizable. Some teemed with maggots and worms. "The stretch was nothing I could ever describe," Ronna said.

As Ronna tells it, her role was "to be a companion and a support to survivors seized by overwhelming loss and by what the Buddha described as the inevitable realities of life: sorrow, grief, pain, lamentation, and despair. I would receive their pain with compassion and equanimity and provide whatever comfort I could in the midst of this living nightmare."

One day, Ronna was woken in the middle of the night by a phone call from a young British woman concerned for her brother, whom she worried might be suicidal. The groom's honeymoon and future had been rudely severed by the confirmed death in the tsunami of his Asian wife.

Ronna went to meet the groom and his in-laws, the bride's parents. They eagerly shared a set of wedding pictures, in which the young bride wore a floor-length white gown with a puffy, tiered skirt and the groom a white tuxedo. The newlyweds were arm-in-arm, beaming, united in joy and the expectation of a happy future.

A week later, the groom had become a widower, his bride a fresh corpse. Her body had been positively identified. Neither the groom nor the bride's mother was prepared to see it yet. They asked Ronna to accompany the bride's father to the morgue. After donning masks and surgical gloves, the two were led to a large refrigerated container that had recently arrived to temporarily house the dead.

The noise of the refrigerator motors and fans was deafening. "What's the number?" yelled a volunteer. The father called it out twice over the din. When the container door slid open, swirling clouds of cold air smacked into the tropical heat. It was a surreal few moments as two men leaped in to rummage through the numbered and bagged bodies.

"Chuay noi dai mai?" (Can you help us?), they asked. So Ronna climbed in and joined them in rearranging bagged bodies until they retrieved the one with the dead bride inside and unloaded her onto the ground.

The father unzipped the white plastic bag and stared at his frozen daughter wearing a two-piece bathing suit, her fingernails and toenails painted red. As he knelt beside her, his tears dripped onto her cold corpse. Then, together, the grieving father and Ronna zipped up the bag and hauled the body back into the refrigerated container.

The following day, the family returned to collect the bride's body. The mother yelled her daughter's name -- "Yuki, Yuki, Yuki" -- louder and louder, as if expecting her to wake up and walk away from the nightmare. They then took the body to be cremated at a local monastery.

That experience, and dozens others like it, left an indelible impression on Ronna's psyche. She explained: "I don't take any day, in fact, any moment for granted. Many of these thousands of people were lying on the beach, playing tennis and golf one moment, and the next moment they were dead. It's a reminder to live each precious second as if it could be our last. With that comes huge responsibility. It means giving up grudges, being generous, being kind, doing the best we can every single day -- just like the sages in all religious traditions teach."

In the face of any unspeakable loss, which everyone will face at some point in their lives -- parents losing children, brides losing grooms (and vice versa), friends losing each other -- Ronna has this advice. "There is very little to say that can be of any real comfort. It's really about showing up with your full presence, allowing the grief to flow without turning away from its massive nature. The trauma of sudden loss is enormous. That said, the nature of the human heart is to heal. But it takes time and courage to take in the enormity of this kind of heartbreak."