Have you ever wondered what unseen photos, untold stories, and unfinished works surviving partners of famous people are left with?

Dr. Gloria I. Joseph has a treasure trove of memories of the renowned Audre Lorde, her late partner. Joseph's long-awaited new book, The Wind Is Spirit: The Life, Love and Legacy of Audre Lorde, gives us a rare glimpse of Lorde, as told by people who knew Lorde or whose work was greatly impacted by her.

Who was Audre Lorde?

While I gasp at having to pen such a query, I realize there's a generation who are the beneficiaries of Lorde's prodigious body of work and social activism but don't have a clue who she was.

If she were among us today, this "poet, warrior, feminist, mother, pioneer, lover, survivor" would be 80 years old. She was born Feb. 18, 1934, in Harlem to Caribbean immigrant parents.

I met Lorde in my early 20s after returning home from Wellesley College looking for an LBTQ support group. I was taken to African Ancestral Lesbians United for Societal Change (AALUSC), the first organization for out LBTQ sisters in New York City. Back in the day AALUSC was known as Salsa Soul Sisters, and Lorde facilitated workshops aimed at helping us love ourselves regardless of rejection by family and church.

But Lorde's indefatigable spirit fought on many fronts -- and exclusion by white feminists was just one of the battles.

The second-wave feminist movement was intentionally an exclusive women's country club. Betty Friedan's upper-crust, "pumps and pearls"-wearing white women were the audience, and poor white women and women of color -- straight or gay -- had neither voice nor visibility.

Lorde not only addressed Friedan's omission of us but called out Mary Daly's hubris in an open letter:

To dismiss our Black foremothers may well be to dismiss where european women learned to love. ... What you excluded from Gyn/Ecology dismissed my heritage and the heritage of all other noneuropean women, and denied the real connections that exist between all of us.

As a Black, lesbian, feminist, socialist, poet, mother of two including one boy and member of an interracial couple, I usually find myself part of some group in which the majority defines me as deviant, difficult, inferior or just plain "wrong." From my membership in all of these groups I have learned that oppression and the intolerance of difference come in all shapes and sizes and colors and sexualities; and that among those of us who share the goals of liberation and a workable future for our children, there can be no hierarchies of oppression.

Among scholars and activists today, Lorde's depiction of "hierarchies of oppression" is lauded as an important theory on intersectionality.

Imani Rashid, Lorde's girlhood best friend, shared with me her insights on when Lorde began to recognize the multiple oppressions that affected her. She told me:

Audre and I were little girls together. We both grew up in Harlem during the post-World War II era. We both attended the same little Catholic school, St. Mark the Evangelist. Audre was, I believe, at an early age aware of the race, class and gender issues of our times. Even though the school was co-ed, only little boys were selected to be altar boys.

Lorde struggled mightily with breast cancer, and her Cancer Journals helped me through my own bouts with the disease. Lorde not only leaves us with a body of work to reflect on but leaves us humbly trying to uphold and implement her vision of radical inclusion and wellness.

"Audre was an eloquent, charismatic revolutionary," Rashid told me. "And while she may have left this dimension, Audre is still being our mentor. She teaches women how to live with the challenges life has to offer."

Dr. Gloria I. Joseph, Lorde's surviving partner (they resided together on Joseph's native island of St. Croix in the U.S. Virgin Islands), is keeping Lorde's legacy alive. Joseph was a firebrand in her day and still is today, despite being in her 80s. Though she's retired now, she was a professor in the School of Social Sciences at Hampshire College in Amherst, Massachusetts, and her legacy is not only the school's nationally renowned black-studies department, which she and others developed in the 1970s, but her inimitable pedagogical style of blending scholarship, the arts and activism, which her students so richly enjoyed and still speak about to this day. 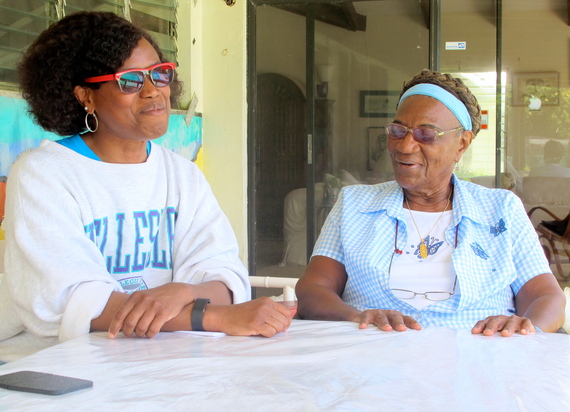 A photo of me talking about Audre Lorde with Dr. Gloria I. Joseph in St. Croix

Together, Joseph and Lorde, then quite ill with cancer, founded several organizations, including the Che Lumumba School for Truth and the Women's Coalition of St. Croix, to name a few.

Joseph and Lorde together produced Hell Under God's Orders, a compilation of wrenching personal accounts of Hurricane Hugo, which devastated St. Croix in 1989, and our government's slow hand in assisting this unincorporated territory of the United States. Lorde's piece, titled "Of Generators and Survival: A Hugo Letter," addressed the devastation and geopolitics of Hugo.

Joseph depicts her latest book as a "bio/anthology" of Audre Lorde. It is a compilation of essays, photos, and recollections by a diverse group of contributors ruminating on how Lorde impacted their life, work, and activism.

In Joseph's typically eclectic, out-of-the box style, her book is also a compilation of the various written genres that Lorde employed throughout her lifetime, and it's narrated in the traditional style of the "griot," a type of West African orator who typically blended history, storytelling, poetry and music.

To learn more about the book, visit the Kickstarter page.

Monroe’s a religion columnist, weekly commentator on Boston Public Radio’s “All REVVED UP” and NBC Boston “The Take.”