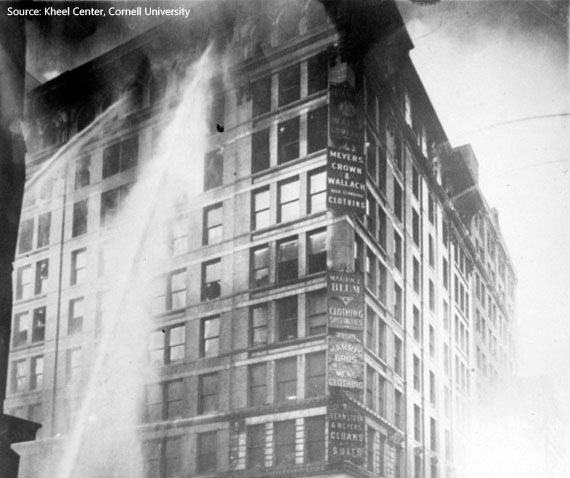 This week marks 104 years since the Triangle Shirtwaist Fire, a tragedy that changed our country forever. On that horrible day, dangerous workplace conditions started a fire at a garment factory in Manhattan's Greenwich Village. Within 20 minutes, 146 people were dead -almost all of them young immigrant women. America reacted with outrage. The backlash to this incident became a turning point in the history of the US and global labor movements. In the ensuing decades, key labor and workplace safety laws that we now think of as obvious were first put into place. The American people resolved that those young women did not die in vain.

But 104 years later it has become clear that too many folks in this country have forgotten the painful lessons of that day. And as we gear up for next year's presidential election, voters should know that some of the candidates running would rather folks forgot about the Triangle Shirtwaist Fire altogether.

These are officials such as Governors Scott Walker in Wisconsin and Rick Perry in Texas. They wear their anti-worker bona fides like a badge of honor and are working to make it harder for Americans to organize and demand safer workplaces.

When Governor Walker sought to take away the right of public employees to unionize in 2011, massive protests against him captured global media attention. During that fight he promised that while those steps were necessary, he would never make Wisconsin a so-called "right to work" state, meaning he would not pass laws that make it tougher to organize unions. But four years later he flip-flopped and in 2015 he signed such a law into effect. Walker promised that these changes were necessary to improve the unemployment problem in the state. But in neighboring and union-friendly Minnesota, which otherwise has similar demographics to Wisconsin, the unemployment rate is 1.6 percent lower.

The case of Texas is even more outrageous. The Lone Star state has long had a reputation for hostility to unions and workers' rights. It also has the highest number of workplace deaths out of any state in the union. In 2013, the most recent year with complete data, 493 Texans died on the job. A worker in Texas was more than twice as likely to die on the job that year as a worker in New York, a state that has much stronger unions and worker protections.

Many will remember in April 2013 when a fertilizer factory in West, Texas, which improperly stored chemicals, exploded. Fourteen men were killed and more than 300 people were injured. The facility was non-union. Stronger workplace protections perhaps could have saved those men's lives. But since then, Rick Perry and the state of Texas have continued to beat their anti-union drum and have not managed to pass a single new law or regulation to make workplaces safer in their state.

The images of that factory in Texas exploding quickly went viral, ricocheting throughout social media. The tragic photographs from the aftermath of the Triangle Shirtwaist Fire should capture our attention just as much. They may look like distant history but they show a society that did nothing to protect its workers. One hundred and four years later, we cannot make the mistake of thinking the battle is won. The richest country on Earth can afford to protect its workers. And the people of this country deserve to be led by men and women who care whether Americans can get home safely to their families at the end of their shift. The young women who died on that fateful day deserve at least that much.