Bundle The Beatles, Madonna and Elvis into a cultural exchange time-travelling cabinet. Open its door in Egypt and out will step Umm Kulthum. No, it's not an exaggeration. That was how much she meant to the Arab world. That is still how much she means.

Thirty-seven years ago today on Feb. 3, 1975, Umm Kulthum passed away. Her funeral drew more than four million people to the streets of Cairo -- bringing together more people than Gamal Abdel Nasser's grand state funeral. A heavy communal grief hung in the air -- her songs of love, longing and loss had touched the soul of the Arab world. Nearly four decades later and she is still regarded by many as the most distinguished female singer in Arab music history.

Dr Ahmed Salama, an Egyptian physician and writer, refers to her as "Queen of the Arabs," capable of culturally uniting a diverse group of nations. He was 24 years old at the time of her death and recalls the sad atmosphere; a time that felt like something had been lost. (Indeed, the feeling was quite literal for him as Tahrir Square was so packed with throngs of mourners that his shoes came off in the rush, leaving him to walk barefoot amongst the crowds).

She had a mysterious and enchanting power, which at the height of her career caused the streets of capital cities across the Arab world to empty as people rushed back home to hear her monthly radio concerts. Even Nasser admired her talent and used her popularity to push his own agenda, scheduling his speeches to broadcast directly after her performances. If Nasser was the political figurehead for the pan-Arab movement, Umm Kulthum can be seen as the cultural embodiment.

After the devastating defeat of the Egyptians in the 1967 war against Israel, Umm Kulthum took the stage as more than a musician; she had become the melodic "Voice of Egypt." She gave a series of international concerts (which took the character of state visits) raising money for the Egyptian military and uplifting the spirits of her people.

However despite her fame and wealth, she never forgot her roots of being born to a humble peasant family. Her father was an Imam at the local village mosque who caused her from a young age to learn Qur'anic recitation, but also how to sing. She was soon recognized to have an amazing voice but the family had no connections in Cairo and it was many years before the move to help her career was made in 1923. In Cairo, with the help of teachers and poets, she flourished.

Nahla Mattar, a composer and director of Cairo's Umm Kulthum Museum, reflects that Umm Kulthum "has been a very strong woman to change her status from just a village girl to such an icon." Her voice and creativity made her a brilliant artist. "Usually Egyptian music is about improvisation... she was very good at this... it depends on the energy between performer and audience." Umm Kulthum understood the art of reading the mood of every individual audience and responding to the tempo of the atmosphere. Her performances would last hours, not minutes, as she gave the audience what they wanted; repeating lines until they were satisfied. It was not just a performance; it was a sincere dialogue, an emotional exchange. 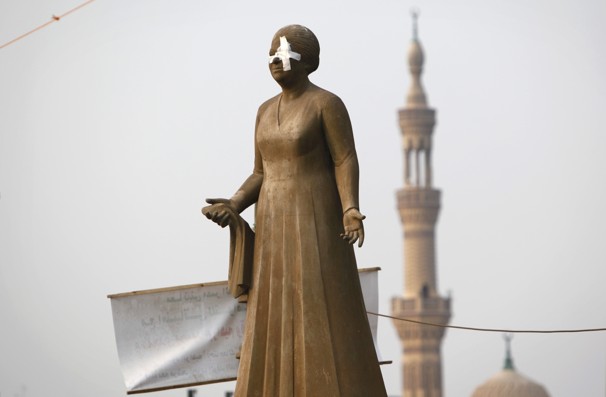 There are few artists like her today. And perhaps it was this feeling that caused Egyptian activists to play her music in the squares of the revolution. Along with other national music icons like Abdel Haleem Hafez and Sheikh Imam, this music of an older generation spoke sense to a modern audience. Dalia Gelbana, a young Egyptian activist, reflects that such artists sang about the 1952 revolution and despite the time lapse, "we have the same feelings and mostly the same demands -- social demands... we think these songs are much better than our songs nowadays." Many current popular artists have lost moral and political credibility as they are seen to have been supporters of Mubarak's regime.

In December, the large statue of Umm Kulthum in Cairo was redefined as a symbol of the revolution. She was given an eyepatch in solidarity with the activists who had their eyes shot out by security forces. It was as if she was saying I am still the voice of Egypt -- and this voice is with the revolution.

Umm Kulthum's reputation and love for Egypt has evidently transcended time. Perhaps the cultural capital she has built up is not erodible. She seems to have become a permanent fixture in Arab cultural folklore alongside great figures such as the historian Ibn Khaldun and the traveller Ibn Battuta. 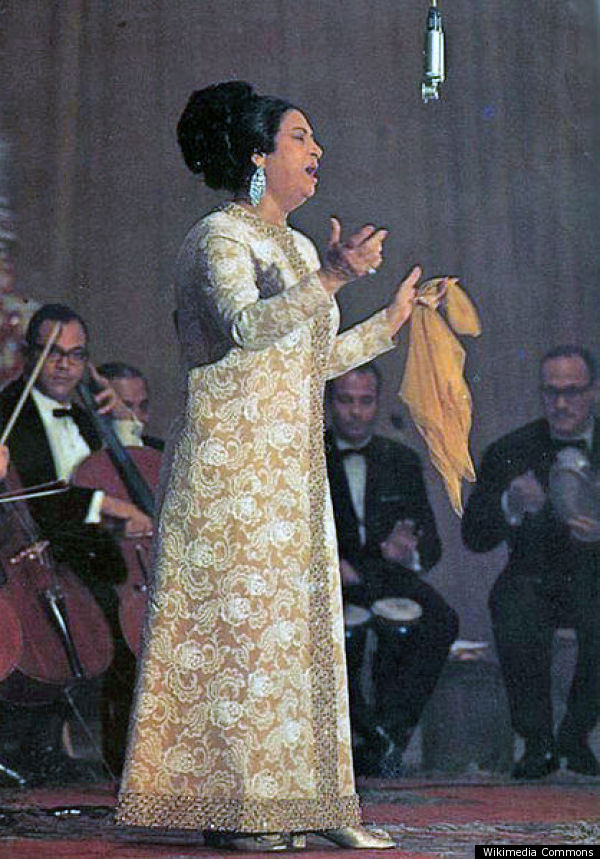