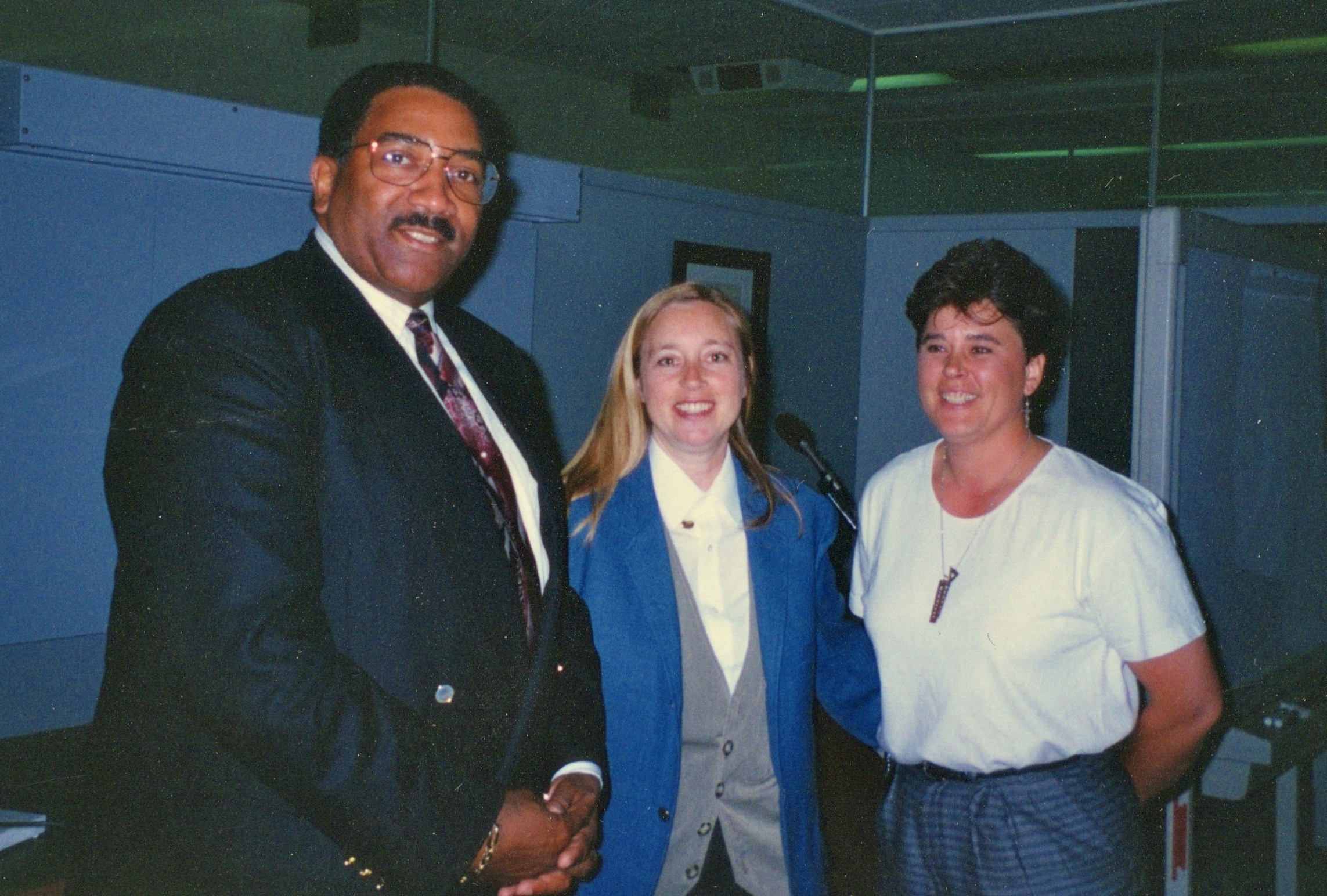 Willie Williams, the police chief brought in from Philadelphia to take over the Los Angeles Police Department in 1992, died Tuesday night of pancreatic cancer at his home in Georgia. He was 72.

Williams was L.A.'s first African American police chief, selected by the city's black Mayor Tom Bradley and the city council to succeed longtime Chief Daryl Gates in the aftermath of the 1992 riots. LGBT people in West Hollywood and around the city joined in the uprising to protest the not-guilty verdict of four white LAPD officers videotaped beating black motorist Rodney King.

Gays stopped traffic on Santa Monica Blvd. in Boystown and on Sunset Blvd. outside the Whiskey, laying down and drawing chalk marks on the street to illustrate victimization at the hands of the police. In fact, the West Hollywood cityhood movement in 1984 had been powered by gays who fled into the then-unincorporated area to escape the LAPD, believing the Sheriff's department was less anti-gay.

Thanks in large part to Lambda Legal's Jon Davidson, the LAPD harassment of out gay cop Sgt. Mitch Grobeson (who was denied backup in a dire situation, among other abuses) and the department's blatant homophobia (police code for gays was "NHI," or "No Human Involved") was documented in the Christopher Commission Report following the riots.

"I am sorry to hear of the passing of former LAPD Chief Willie Williams. Chief Williams was the first African-American to lead our Police Department, and he took stewardship following the civil unrest of 1992 -- a difficult period in the history of law enforcement in our city. He served at a time when many of the reforms proposed by the Christopher Commission were being implemented, setting the department on course to become an international model for community policing. My thoughts are with his loved ones," L.A. Mayor Eric Garcetti said in a statement.

One of Williams' mandates was to try to restore public confidence after 14 years of the iron-fist rule of Daryl Gates, who was respected in a military chain-of-command fashion by at least some closeted gays. But leaders such as the late Gay Liberationist Morris Kight were a perennial thorn in his side, as was closeted city council member Joel Wachs, who kept trying to force the LAPD to adhere to the city's anti-discrimination policy and allow LGBT officers to come out and recruit at the CSW Pride events.

When Williams was introduced to the city on April 16, 1992, I was invited as a freelance journalist for the gay press to come to the live televised press conference at City Hall. I wore a bright pink jacket and sat on the floor up front to increase my chance to be called upon. Bradley called on several of the TV reporters first, but then Williams called upon me. I knew I had one shot at a question: should it be about how he'd handle gay protesters like ACT UP or about gay cops? .After first welcoming the new chief to the city, I decided on the latter, asking him what kind of non-discrimination policy he would have toward gays, especially in terms of gay officers, coming out, being hired and promoted. You could hear a pin drop in the room after my question and then suddenly click, click, click as the still cameras exploded taking shots. No one had thought of the question and everyone thought the answer would make news.

Bradley and councilmembers Wachs and Zev Yaroslavsky froze: they hadn't thought of the question either, hadn't prepped Williams about the city's LGBT community and were clearly nervous as to how he might answer. But Williams was unfazed. He looked at me and said that he would have a zero-tolerance policy towards discrimination in the ranks and towards the public, including gays, just as he had in Philadelphia when he instituted their community policing program. And that included coming out, hiring and promotion.

"We have 80 different ethnicities out there (in Los Angeles). We have people with various sexual preferences. The police department must be reflective of the city of Los Angeles and we will recruit from all communities," Williams said.

It might not have felt like it for the other mainstream reporters in the room who simply included that response in their larger news packages that day--but some of us, including Wachs and Yaroslavsky, knew that it was a significant turning point, at least officially. And in the para-military world of the LAPD, that meant something. I got a number of calls from closeted LAPD officers who were grateful for getting Williams on the record. Grobeson, who'd left and sued the LAPD, thought about coming back.

Things seemed to change. In Aug. 1992, Williams came to the L.A. Gay & Lesbian Community Services Center as one of the first stops on his community-outreach tour. The Center, while appreciating his response on gay officers and hiring practices, was well aware of how Philly cops under Williams had beaten and mistreated ACT UP protesters during a 1991 visit by President George H.W. Bush. Center spokesperson David Smith (Center executive director Torie Osborn's right hand gay man) told the Philadelphia Inquirer that although a Williams-appointed panel ruled that the officers had indeed used unnecessary force on the demonstrators, "there are some indications that he was acting for pure political reasons -- to show Los Angeles how he would react to something like the King beating."

Williams told a room full of lesbian and gay leaders and activists that he considered the gay community to be part of the larger L.A. community (as opposed to inherently deviant individuals, as the LAPD's internal "God Squad" saw gays) and would mandate that all citizens would be treated respectfully. Though the meeting was closed to the press (except me), he said the same thing to the throng of media awaiting him outside the room at the Center's headquarters on Highland Ave. in Hollywood.

In 1993, Williams awarded LAPD Officer Lisa Phillips and her partner Daniel Nee the Medal of Valor for their courage and heroism saving a trapped woman during the L.A. riots. Lisa had only recently come out to her partner but made the decision to come out to the entire department -- and the city -- when she accepted her medal from Williams, with two tables of screaming lesbians cheering her on.

"At the time, in 1992/1993, only a few brave cops had come out--six to be exact. It was not a good atmosphere. The LAPD had no anti-discrimination policy and we had never aggressively recruited in the LGBT community. It was not and did not feel like a safe place to be a gay police officer. Cops that were thought to be gay would be taunted, picked on and not protected if they made any kind of complaint against a peer or supervisor," Phillips remembered in an essay commemorating the 20th anniversary of the riots. "For these reasons, I came out on a large scale. I wanted to show my fellow officers, my superiors, the City leaders, my community, that we were there, we could do the job just as well as anyone else--and that most of all, we deserved to be on the job."

But with the hiring of Willie Williams, Sgt. Phillips remembered, "Things began to change. The Grobeson Settlement started taking hold and I began working in the Recruitment office, and began aggressively recruiting in the LGBT community, everywhere I could: the rodeo, the parade in WeHo, Long Beach, The Valley. Radio shows, recruitment posters, LGBT papers. With the help of many in the community, we petitioned Chief of Police Willie Williams to create a position in his office that would reach out to the LGBT community. That position was, and still is, the Liaison to the LGBT community. That position opened many doors, and continues to push those doors even further open."

As the LAPD's first openly gay liaison, Phillips arranged for a one-on-one interview at Parker Center with Williams, another gay reporter and myself. The interview established a precedent: I have interviewed every LAPD Chief since (as well as LASD Sheriffs Sherman Block and Lee Baca).

Among the other big changes in the city of Los Angeles was a voter-passed amendment to the city charter to strip the civil service protection from the chief's job that had protected Daryl Gates for so many years. Additionally, the chief's job was limited to a five-year term, which had to be revisited and renewed by the civilian Police Commission. Republican lawyer Richard Riordan was elected mayor in July 1993 and to the surprise of many, he road in the CSW Pride Parade and named Wachs friend and openly gay businessman Art Mattox as the city's first gay police commissioner.

Williams continued his community outreached, such as attending the grand opening of a special exhibit of The Advocate's "Long Road to Freedom" at the L.A. Library, accompanied by Mattox, Center executive director Lorri Jean, Advocate editor Mark Thompson, out Commander David Kalish and officer Marc Goodman.

But Riordan and Williams didn't get along and Williams' five-year term was marked by turmoil, including the controversial O.J. Simpson murder case and an investigation into whether Williams improperly accepted perks at a Las Vegas hotel for himself and his family. In 1997, Williams was denied a second five-year term, with the police commission noting that he was a symbol of positive change, but was weak as a respected administrator.

But as Phillips noted in her April 2012 essay, Williams' tenure changed history for the L.A. LGBT community.

"Things have continued to improve and when we first marched in the CSW Pride Parade in 1995, with 3 cops; myself, Marc Goodman and Paul Butler (with the assistance of several of my friends in civies), it was one of the proudest moments of my life. Even though we were few, and even though many gay cops at the time didn't trust us, we pushed on, hoping and believing that things would continue to change for the better, and they have indeed changed for the better," she wrote.

"When I came on the job 23 years ago, Chief Gates was in power and he didn't like gay folk patrolling his streets. He was not open to change and he fought it. After the riots, when Gates was forced out, Chief Williams was brought in from Philadelphia, an outsider. Many higher-ups on the LAPD did not support him, but Chief Williams was a bit of a visionary. Perhaps because he was a black man and had seen discrimination up close and personal. Perhaps he felt the struggle and wanted to change what he could. He was the one who agreed to create the Liasion position. And though it could not have been easy for him, he did it, and changed the Department forever.

"I will forever be thankful for him for having the guts to say 'yes.,'" Phillips continued. "Yes to the position, yes to us marching in the parade (in uniform), yes to us aggressively recruiting in the LGBT community, yes to allowing me to open the first Stop-In Center at the L.A. Gay and Lesbian Community Center in Hollywood. He said yes a lot, and I know he got a lot of pushback from his underlings. But he had the guts, and could see the future."

Rest in Peace and thank you, Willie Williams.