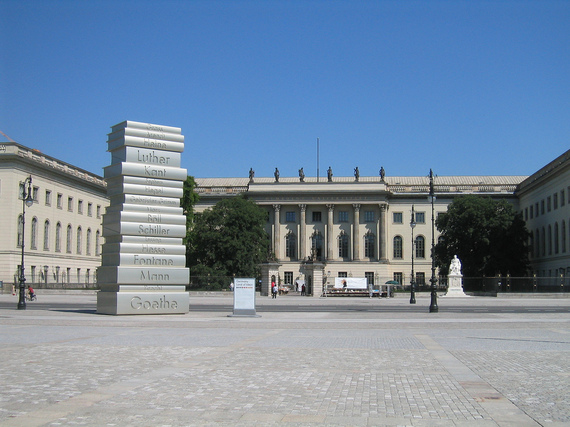 Berlin, the capital of Germany, holds a unique and sad chapter in the world history books. While the modern city is home to a plethora of cultural and educational institutions, Berlin during World War II was a significantly different place. When Hitler and the Nazi Party came to power in 1933, the republic that had been known for housing the German expressionist movement became the headquarters of a movement that devastated a people and a planet. Hitler's Germany may be gone, but it is not forgotten. Here are four historical landmarks in the city of Berlin that hold somber reminders of a time not long ago.

Historically, Berlin prided itself on being a place that valued learning, a city of rich culture that is the proud home of the
Deutsche Oper Berlin
opera house and
Humboldt University
. Steps from these impressive structures, however, is
Bebelplatz
: a simple town square where free speech was symbolically eradicated on May 10, 1933. It was there the Nazis held their first book burning, destroying the works of authors they felt were against their cause. Moments from the
Gendarm Nouveau Hotel
, visitors can see a monument to this historic event under the square--a display of empty white shelves below the earth.

This historical building housed the German parliament, or
Reichstag,
until it caught fire in February 1933. Because of the mysterious circumstances around this fire, the Nazi Party suspended many rights in an attempt to weed out those who stood against them. Ultimately, the German reunification ceremony was held at the
Reichstag building
in 1990, and the building was then gutted and reconstructed. However, many remnants of its history remain, most notably Soviet graffiti from the final battle for Berlin.

Although the building itself has been destroyed, visitors still flock from the nearby
Winters Hotel
to the site of Hitler's bunker, next to the
Reich Chancellery
. This locale holds special significance to the life of the dictator, as it is the site of both his wedding and his suicide. Hitler spent the last six weeks of his life in this bunker, and it was here where he finally admitted the war was lost. On April 30, 1945, it is believed he took cyanide and ultimately died of a self-inflicted gunshot.

One tourist spot that grew out of the ashes of Nazi Germany is the
Monument to the Murdered Jews in Europe
, located near the
Brandenburg Gate
(Berlin's most famous landmark, visible from the
Hotel Adlon
). This memorial was created by Peter Eisenman and Buro Happold between 2003 and 2004, and it consists of undulating paths nestled between tall concrete blocks of various sizes. Underneath the memorial is a simple yet powerful museum holding the names of all known Jewish Holocaust victims.

Although it is a dark hole in humanity's past, remnants of Nazi Germany can still be found in Berlin. Pockets of this sad history rest between the tourist attractions, renowned restaurants and hotels in Berlin, visible beneath a repaired exterior. If you are planning a trip to Germany's capital city, be sure to take some time to leave your Berlin hotel and explore the education and historical significance the town has to offer.

More:
travelhotelsberlin
Newsletter Sign Up
An essential daily guide to achieving the good life
Subscribe to our lifestyle email.
Successfully Subscribed!
Realness delivered to your inbox