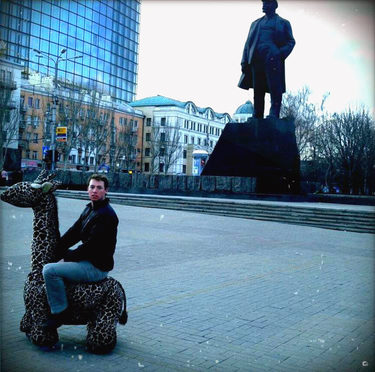 Lenin Square before the war. Donetsk.

The houses in the center of town had just been given fresh, clean plastic siding to impress foreign visitors for UEFA 2012, a soccer championship. Proud locals directed tourists to the gleaming new stadium where Donetsk Shakhtar played. Downtown was in motion, with people floating between beer pubs and guys renting out bicycles and electric cars for kids on Lenin square.

Out by the mines, the smokestacks blow thick black dust over the dirt roads lined with squat wooden houses. A girl in a little too much makeup emerged from behind a scrap metal fence, adjusting her high heels until she noticed us and shyly walked on. Down the road, a guy in a track-suit charged from his Lada when he saw me taking pictures of the street, insisting I delete them. He relaxed and smiled when he realized I was foreign. I bought a beer in a dim pub and stood at a table listening to the regulars complain about all the billboard advertisements being in Ukrainian.

Donetsk is encircled by slag heaps that have hardened into stocky red hills. The modern city was founded as a coal town by a Welsh businessman, and its steel plants were built in the 30's when the city was named Stalino. The mines are the heart of the city, and of the whole region. There are big signs with slogans like "Glory to the Miners of the Donbas," short for Donetsk-Basin. 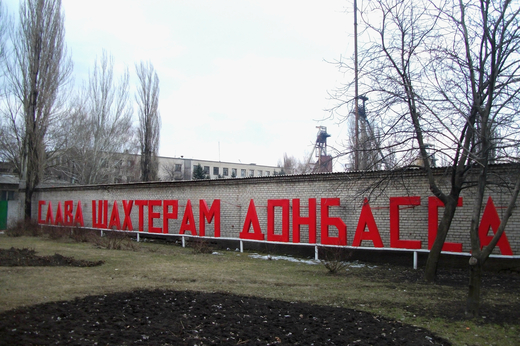 "Glory to the Miners of the Donbas"

I did not give it much credence at the time, but even then it was clear that people were discontent. A local photographer, Alexey, let us stay with him and his family at their home in a suburb called Makiivka, which is currently under rebel control and has been heavily shelled. The neighboring house was falling apart, and he said the residents would strip the ruined rooms for firewood in winter. Outside his house, I saw an old man digging through the trash with a pair of dogs, looking for food.

My friend was writing about Ukrainian life for a Dutch paper, and she heard of a gay-rights activist named Roman Zojev working in Donetsk. He had established a LGBT church--the Church of St. Cornelius-- claiming he was an ordained Mormon priest. He lived in a tall communal apartment block, mostly abandoned with the exterior walls along the staircase knocked out. His apartment had caught fire the year before, killing his elderly neighbors. The walls and ceiling were charred black, and the refrigerator had melted. The place was lit by a single bare bulb with a wire tacked to the wall, stringing out into the hallway. However, Zojev had rebuilt his small room, which we crammed into. 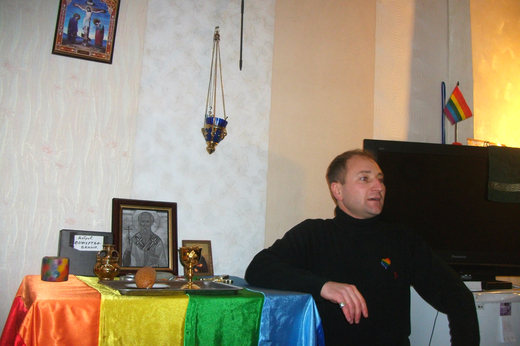 He held an impromptu service, donning a rainbow sash over his white frock and leading a modern Christian-pop song in Russian. He gave communion and described his first public meeting, which was firebombed by "hooligans." Last I heard, he has left Ukraine and sought asylum in the Netherlands.

I remember a few nice things in Donetsk before the war: sharing peanut-butter with new friends and toasting over shots of vodka. At the time it was a bustling business center, with glass-and-steel skyscrapers coming up and shiny Mercedes outside upscale cafes. It did not have the color of Kiev, the energy of Odessa, or cheer of Lvov, but at least it was growing and prospering, even if mostly for the benefit of a shadowy elite.

Outside the center, the city was bleak. It was industry, coal, steel, smoke, dust, and desparation. Misfits like Roman were yearning for a way out, others for a return to the heady Soviet days, when Donetsk's mines and factories worked around the clock. Artillery shelling has wrecked the soccer stadium, the new airport, apartment buildings, hospitals and schools, casting life into convulsions as people flee, hide, or pick up rifles. The fighting has left hundreds dead out in the suburbs and neighborhoods that welcomed us back then.